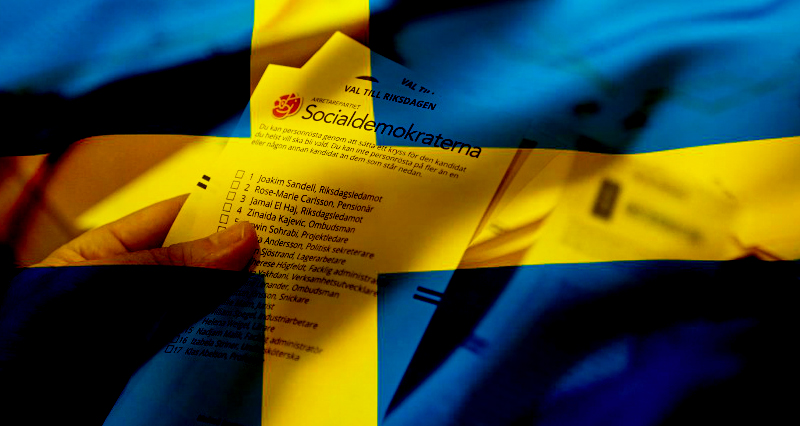 The Sweden Democrats (SD), whose anti-immigrant and anti-Islamic stance born out of the neo-Nazi movement, became the second largest party in the elections. Prime Minister Magdalena Andersson was obliged to resign, despite the Social Democrats increasing their vote share, as two of the outside supporters lost their seats. Forming a government was left to the anti-immigrant and anti-Islam coalition, which narrowly won the elections with 176 seats.

Anti-immigrant and anti-Islamic Sweden Democrats (SD) won the September 11 elections. SP received the votes of one out of every five voters and became the second largest party in the parliamentary elections. Moreover, the SD managed to get the votes of 12% of the people it most opposed to: those with a migrant background whose father or mother was born outside Europe.

The Social Democrats (S) won the highest number of votes in the elections. On the evening of 14 October, Magdalena Andersson, unable to secure enough votes to form a new government with the parties supporting her, conceded defeat and asked for her dismissal. However, she did not forget to tell the Moderate Conservatives (M), with whom she had cooperated during the NATO application process, that “if you want to work together, my door is open to you”.

The Center Party (C), which supported the Social Democrats’ government from outside and considers itself as the representative of the countryside, lost the most votes in the elections. In the intra-party discussions that intensified after the elections. The oppositional wing is targeting the party leader Annie Lööf and calling for her resignation. Shortly before the elections, Ing-Marie Wieselgren, Psychiatric Coordination Officer for the Swedish Municipalities and Regions, was murdered on the island of Gotland in an attack mainly targeting ‘Lööf’ during the Almedal election campaign, in which all parties and their leaders participated. After the murder, Lööf had a difficult time but continued her election campaign. Annie Lööf remains silent, while the press insists on handing the microphone to the party’s dissidents, who have been raising voices after the election defeat. However, it is said that an e-mail was sent from party cadres demanding self-criticism. Unable to withstand the pressure, Lööf finally announced her resignation as party leader.

Another loser of the elections is the Left Party (V). Some MPs of the party, which supported Andersson’s government from outside, posed with PKK t-shirts before the elections as a reaction against Turkey. The party, which was publicly criticised for this behaviour by the Prime Minister Magdalena Andersson, and was accused of sabotaging the NATO process, also lost its seats in parliament.

The main opposition party, the Moderate Conservatives (M), also lost votes and seats. Having united the Liberals (L), Christian Democrats (CD) and Sweden Democrats (SD) under its leadership as a right-wing bloc during the election process, M may have to give not only the title of main opposition party but also the parliamentary presidency to SD after the elections. The Moderate Conservatives (M) are preparing to form a government despite losing seats and becoming the third party in the elections. Although not officially announced by the Electoral Commission, the “blue-brown” grouping under the M umbrella now has 176 seats in the 349-seat Swedish parliament. However, cooperation with the SD is likely to be a problem for the right-wing parties.

The “red-green” alliance of the Left Party (V), the Center Party (C) and the Environment Party (MP), which supports Prime Minister Andersson and the Social Democrats, has 173 seats.

While the press and television only gave wide coverage to the parties in parliament, it was the Nyans Party that made the biggest splash on election day. Party leader Mikail Yüksel was expelled from the Center Party (C) just before the 2018 elections under pressure from the “Kurdish lobby”. Nyans campaigned against the widespread anti-Islamism in Swedish society and against the removal of children from their families based on the Social Services law, as well as the Palestinian issue, and won votes especially in immigrant-heavy areas. However, Nyans failed to gain enough votes to take a seat in either the municipality or the parliament. On the other hand, Muharrem Demirok, a candidate of Turkish origin from the Center Party (C), succeeded in entering parliament.

SD moved to power while being excluded

SD, which had set the agenda -and had been allowed to- throughout the election process, had ended up as the third party in the 2018 elections. For 4 years, no party openly cooperated with the SD, which spoke on every issue in the parliament. Nevertheless, SD took every opportunity to exploit the “discontent” and easily spread its anti-immigrant and anti-Islamic views within the framework of “freedom of expression”, thus SD’s views began to be defended by other parties as well. In the year leading up to the election, SD had become the party that defined Sweden’s political agenda as reactions to the burning of the Koran turned into attacks against the police, Sweden’s ranking first in Europe in the statistics of gang showdowns resulting in fatalities, and the failure to integrate immigrants into society. Eventually the traditional right-wing parties M, KD, L, in other words the “blues”, included SD and formed a “blue-brown” bloc.

The SD, which increased its vote by 3% and became the second party, caused its first scandal on the night of the election. Rebecka Fallenkvist, the party’s candidate in the regional elections and a programmer on SD’s radio station, said the Swedish version of the Nazis’ famous slogan “sieg heil” into the microphone, in a party event to watch the election results. Then realising her mistake she tried to recover. Later, both she and her party posted on social media that she was “a little drunk” and she mumbled and misspoke.

The possibility of SD to be a ruling partner causes concern

Willy Silberstein, chairman of the Swedish Committee against Antisemitism, told Swedish television that they are concerned about the SD’s electoral success. Silberstein stated that there are Nazis among the founders of the SD and that the SD was a Nazi party before the current leadership. In response to Silberstein’s statement, Björn Söder, the SD’s most possible candidate for the presidency of the parliament, said, “Willy Silberstein, on TV without our representative present, lied. You will see that the public broadcaster (television and radio) will be fundamentally changed.” Thus, he pointed out a “clean up”.

MP Ali Esbati, spokesperson for the Left Party (V), also expressed his “concern for his family” after the SD’s success in the elections.

Singer Jason “Timbuktu” Diakite, who previously appeared in court with the SD and was obliged to pay compensation, also posted on his social media account after the elections: “All dark-skinned and brown people in Sweden, be more careful now. These election results will undoubtedly mobilize more the extremist forces that have been in this country for 100 years. There will definitely be violence. Be careful but do not be afraid. It doesn’t matter if they have won now. Time, goodness and demography are on our side.”

Claiming that 130 billion kroner, equivalent to 10% of the state budget, is spent on refugees every year, SD wants the doors to be closed to immigrants, immigrants who commit crimes to be deported with their families, penalties to be harsher and the number of police officers to be increased. With this discourse, the SD appealed to the sentiments of “security” of Swedes who have rarely encountered immigrants in their lives, and thus achieved a huge increase in votes, especially in rural areas.

Now M will try to form a government, but it will not be easy. There are those who do not want to be in a government with the SD but want the SD to support the government from outside. However, as the second largest party, SD is chasing ministries! Different models of government are being discussed. In the coming days, we will have to wait and see whether MPs from right-wing parties other than the SD, who are not in favour of the SD line and cooperation with the SD, will emerge and whether these MPs can be persuaded.

Political turmoil aside, Sweden is suffering from unprecedentedly high prices for basic food and electricity. The announced inflation rate of 9% is the highest in Sweden in the last 30 years. Hard times await the elderly with low pensions, women with children and families who are already struggling to make a living, and students who cannot pay the rising rents and have difficulty finding housing and dormitories.