“The French government and state keep considering North Africa and Middle East as their backyard, but that period is finished now” 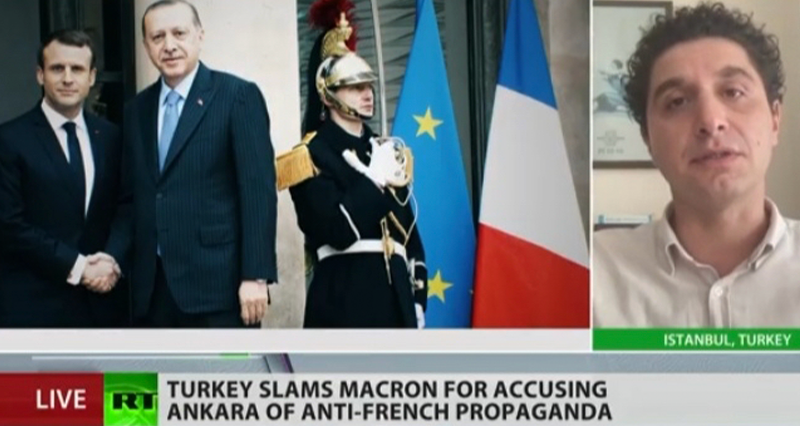 French President Macron, “Who wants Türkiye to be the only power in the world that talks to Russia?” made a statement. Right after, he made statements targeting Türkiye during his visit to Algeria.

“European governments are acting against their national interests”

How do you think this call by Macron to maintain dialogue with Russia will be received by the rest of Europe??

First of all, I have to say that from the beginning of the Ukrainian conflict, all the governments of Europe are acting like vassals of the United States, and they are acting against their national interests. And lately the German foreign minister told openly that even though the German citizens did not want any kind of a sanction against Russia, they will continue to apply these sanctions and will continue to support Ukraine. This was a good example of the European governments acting against their national interests. I think that the only way to normalize relations between Europe and Russia is only possible with changes of governments in Europe. And I think that President Macron’s statement is groundless.

President Macron uses the term “diplomacy of combat” to emphasize his desire to resolve the conflict diplomatically. Then we have the French government delivering more than 100 million Euros worth of military equipment to Kiev. What does this tell us?

I am sure that it is a hypocritical statement, because on the one hand, France keeps supporting Ukrainian forces and delivering arms to them from the beginning of the conflict, on the other hand, now Mr. Macron says that he wants to make a deal with Russia. So, where is the logic on this statement. From the beginning he acted in favour of the US and not in the French national interests. But since the economic situation in France is really bad, he is now trying to find another solution. That is why he made this statement, but I think now it is a little late to make such statement for President Macron.

Is it surprising to you at all that Türkiye, as a NATO member and arms supplier to Ukraine, maintains ties with Russia despite a lot of external pressure. How does this work?

Türkiye is an independent country. We may be NATO member, but our government, or rather our state, is making independent policies and defending the national interests of Türkiye. Russia is our neighbour. We have very good relations with Russia in the fields of economy, energy and military. These are some of the examples. So, it is normal that the Turkish government did not apply these anti-Russian sanctions, because they are against Türkiye’s national interests. So, the Turkish state is following an independent policy and not acting like the other European governments that act like vassals of the United States.

In terms of French-Turkish relations, Türkiye has previously condemned French President for accusing Ankara of spreading anti-French propaganda in African countries such as Algeria. Does that explain Macron’s diplomatic pressure and why he is acting in this way now?

The French government and the state keep considering North Africa and the Middle East as its backyard, but that era is over now. Let’s take the examples of Libya, Syria or Lebanon. France is no more an active player in this field. And now Türkiye plays an important role in breaking of the French influence in these regions. So that is why France is following aggressive policies against Türkiye and the Turkish government. That is the main reason.

I think that the real fear of President Macron, reflected in his latest statements, is cooperation between Türkiye and Russia and the possibility that this cooperation could continue in North Africa or the rest of Africa. Because we had good results in Syria, and Astana process is still going very well. So, I think that the French government is really afraid of a possible cooperation between Türkiye and Russia in North Africa and also in different areas of the Middle East.

And that brings me to my final point, which of the two leaders, Mr. Erdogan or Mr. Macron, is perceived as the more effective mediator by the conflicting sides?

Well, I think it is not up to me to answer this question. But the facts show that the French is out of this game now. I mean they are losing now, because of the acts of the French government – even before, with President Hollande or President Sarkozy. They broke with the policies of Charles De Gaulle, who pursued independent policies between the United States and Russia. However, now these last governments of Sarkozy, Hollande and Macron, all act like the vassals of the United States, and now they are paying the price for it. On the other hand, now the Turkish government and the state is following independent policies and defending their own national interests.