Ukraine: A war in miniskirts? 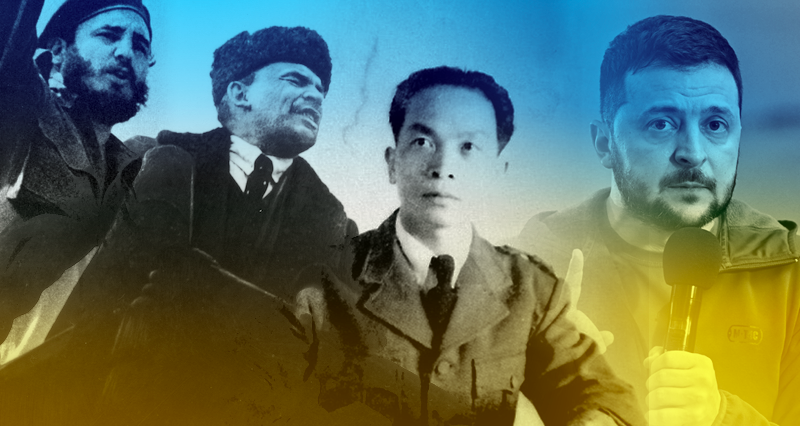 Although it is insufficiently known: There are perhaps few social scientists who have theorized as much and as well about war as Vladimir I. Lenin. When studying the First World War, he said that: “the proletariat fights and will always fight unfailingly against war, but without forgetting for a moment that wars can only be ended when the division of society into classes is totally ended…”. The Soviet leader also taught that: “In war, whoever has more reserves, more sources of strength and more support among the people, wins.”

In the same way, one of the most brilliant contemporary military strategists, the Vietnamese general Vo Nguyen Giap, stated that victories in combat were closely linked to “production, communication, transportation, cultural, health and other activities”. Thus, General Giap considered that the multilateral victory […] is the result of the heroic struggle of all compatriots in all branches, services, and regions who dedicated their prodigious efforts, braved bombs and bullets, and overcame innumerable difficulties.”

It is necessary to understand then, that the phenomenon of war is very complex, especially because the subjective factor intervenes decisively to forge victories when there are shortcomings or insufficiencies of the material elements that make up its objective side.

In modernity, although technological instruments play an increasingly relevant role, the main and conclusive tool continues to be that of the human component that participates in the conflict. No matter how much the technique has been developed, the objective of war continues to be to occupy territories. And that is only possible when the soldiers of an army and the officers who command them take an effective position in geographical space.

Only those who have participated in a war know the barbarity that it entails. In the warlike conflict the best and the worst of the human being is unleashed, the best because the decision to give life for something in which one believes, exceeds any analysis about the subjectivity that could motivate such action. Incidentally, this does not apply to mercenaries and hitmen who only fight for the money and emoluments they might get. But war also unleashes the worst of the human condition, which is the need to kill in order to survive.

It is known that what separates a common politician from a statesman is basically the latter’s ability to successfully manage the elements related to defense and security, first of all, being able to direct the armed forces; Likewise, it is essential to have the genius and ability to conduct foreign policy and international relations. The rest can be done by anyone, especially if they are well advised. I had the chance to meet Commander-in-Chief Fidel Castro, the greatest military genius of the 20th century in Latin America, and I know what I’m talking about.

All this long disquisition comes to account of the direction of the war in Ukraine and the decisive element that means leadership and strategic command in the conflict that not only takes place in the military field. On the one hand, the president of Russia, Vladimir Putin has given clear signs of his ability to manage the war “as a continuation of politics by other means.”

The same cannot be said of those who manage the war from the other side of the  trench. When the head of European “diplomacy”, Joseph Borrell affirms that the end of the conflict will take place in the military field and later, assures that “Russia has already lost the war and is on the defensive against Kiev”, despite the fact that Russia has already conquered 27.2% of the Ukrainian territory – in which, by the way, in a large part of them, life is moving towards normality under Russian control – we realize that we are facing very dangerous levels of ignorance and stupidity. Above all, because this view of the facts leads to deeply mistaken decisions that result in the unnecessary sacrifice of thousands of soldiers for political interests not even linked to the traditional rhetoric and paraphernalia of the West.

When looking at the map of military operations, the recent and much vaunted Ukrainian “counteroffensive” in the south, it is hard to believe that such an action was planned by professional soldiers: a penetration into a sector of the Russian defense leaving the flanks open and advancing in depth to the point of making it impossible for logistics to fulfill its mission of guaranteeing the combat supplies necessary for success, presaged disaster… and so it was: 152 tanks, 151 infantry fighting vehicles, 110 armored combat vehicles, 56 armored trucks, 17 special vehicles, 11 fighter planes of different designations and 3 helicopters destroyed, and what is worse, 3100 soldiers annihilated between August 29 and September 6 is the balance of this madness, motivated only by the need to show results to justify the arrival and increase of western aid, although it is evident that this is a lost cause.

Needless to say, the Western media massively rushed to headline this disaster “Epic Victory of the Armed Forces of Ukraine”, misleading their readers with impunity.

While this is happening, the Russian army continues to focus its efforts on regaining control of the entire Donestsk territory, maintaining the liberated regions of the Kherson, Kharkov, Zaporozhye and Nikolaev provinces. At the same time, President Putin, Defense Minister General Shoigu and the Chief of the General Staff of the Russian Armed Forces, General Gerasimov, traveled to the far east of the country to inspect in situ the conduct of the Vostok 2022 military exercises that were developed in seven polygons and in the seas of Japan and Okhotsk and in which some 50,000 soldiers, more than 5,000 heavy weapons units, 140 aircraft and 60 ships from Russia as well as Algeria, Armenia, Azerbaijan, Belarus, Burma, China, India, Kazakhstan, Kyrgyzstan, Laos, Mongolia, Nicaragua, Syria and Tajikistan participated.

In the case of the Ukrainian “offensive” in the south of the country, the political leaders (Zelensky, Biden, Johnson, Scholz, Macron, Borrell, Stoltenberg and company), who know nothing about the war, imposed on the armed forces the obligatory nature of a military operation that from the beginning had not had the slightest chance of success and that cost the lives of 3,100 young Ukrainians who believed that they were sacrificing themselves for the Homeland, when in reality they did so for the commercial interests of the large energy transnationals and weapons from the United States who are making huge profits from this war.

The truth is given in the opinions of experts, none of them friends of Putin or Russia. Let’s read what some say. When the war was just beginning, in a long interview, Jacques Baud, colonel of the Swiss army, expert in military intelligence and deputy in NATO and the UN was asked how to evaluate the Russian offensive? He answered:  “Attacking another State goes against the principles of international law. But the background to such a decision must also be considered. First of all, it must be made clear that Putin is neither crazy nor out of touch with reality. He is a methodical and systematic person, that is, very Russian. I think he was aware of the consequences of his operation in the Ukraine. He assessed, obviously rightly so, that whether he carried out a “small” operation to protect the population of Donbass or a “massive” operation in favor of the population of Donbass and the national interests of Russia, the consequences would be the same. So, he went for the ultimate solution.”

For his part, last Tuesday in an article for The Wall Street Journal Brigadier General of the United States Armed Forces, Mark Kimmitt stated that: “Starting a diplomatic agreement would be unpleasant and perhaps apparently defeatist, but there is little chance of getting out of the current impasse, so it might be better to start negotiations now. than later”. Kimmitt recalled that NATO can no longer cope with the need to keep up the pace of arms supplies to Ukraine, because Ukraine’s forces too often lose them on the battlefield. The US general said he believed that cutting Western supplies to Kyiv would have a “disastrous” effect on the Ukrainian military.

Finally, the retired general and former deputy secretary of the National Security and Defense Council of Ukraine, Serhiy Krivonos, expressed his dismay at the “monstrous” losses of the Ukrainian army, which according to him number “tens of thousands, and could even reach hundreds of thousands”. Questioning the causes of this situation and the refusal to talk about it by the Western authorities and media, Krivonos said: “The stories that now is not the time to talk about it are nothing more than an attempt to cloud memory, erase history. But how can you erase the blood of the dead, who already number in the hundreds of thousands? Who will answer for it?”

While this is happening, the Washington Post in a report on Tuesday, September 6, was forced to say that the Ukrainian soldiers who participated in the counteroffensive attempt in the Kherson region in the south of the country, “complain of great losses, lack of ammunition and technological backwardness with respect to the Russian army”. The daily newspaper from the empire’s capital quoted a soldier, saying almost all of his comrades out of a total of 120 “were wounded, many seriously”. He attributed it to the need to save ammunition, but also stated that when they fired “it was difficult to hit because of problems with the guidance systems of old weapons.” The Post concludes by stating that “many fighters in the Armed Forces of Ukraine doubt whether the attempt was worth it [in the face of] such losses.”

A few days before this happened on the battlefield, Zelensky and his wife posed for Vogue magazine, whose last headline was: “All the miniskirt trends for this fall and winter 2022”. Treating the war as if it were a banal and showbiz event and assuming that the death of so many young people will go unpunished due to the political irresponsibility of European leaders, will be part of the next chronicles that will have to be written when this story ends. But I don’t think it’s miniskirts that the Ukrainian soldiers fighting are going to wear when the dreaded boreal winter approaches.