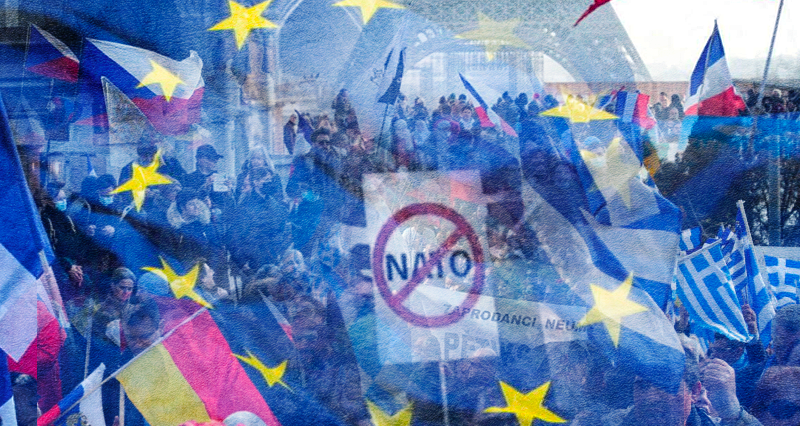 The conflict in Ukraine continues to affect Europe. Sanctions applied against Russia are continuously increasing inflation. European lives were seriously and negatively affected by the fact that gas supplies from Nord Stream 1 were down to 20% of capacity.

European governments meanwhile continue to deliver material aid to Ukraine, beginning with arms, as they did since the eruption of the clashes. Billions of Euros have been poured to Ukraine. In exchange, Europe has imported 6 million refugees from that country and high inflation.

But now, Europeans are rebelling against their governments, which in spite of deepening economic crisis insist on continuing the same Ukraine and Russia policy. Recent protest actions showed clear rejection of the United States and NATO. In Germany, both protesters as well as the opposition have qualified the German government as “the United States’ puppet”. Protests targeted German Chancellor Olaf Scholz, the British government and most recently, the Czech Republic’s capital Prague was the stage for the biggest mass protests against NATO and the United States. In short: Europe is heating up.

German Chancellor called “clown of the US”

Germany is the European most dependent on Russian energy. The sanctions imposed against Russia have brought the inflation rate in Germany close to two-digit-numbers. At the same time, Germany has provided Ukraine with heavy weapons during the crisis. The people in the country are upset with energy prices and decreasing purchasing power.

Germany’s social democrat Chancellor Olaf Scholz held a public meeting in Neuruppin, where he was protested. While he was declaring the economic aid package, the people booed Scholz. The protesters shouted to Scholz: “You are a clown of NATO and the US, you are an enemy of the people, a liar, a traitor. Get lost.”

The German government’s sanctions against Russia had caused rising energy bills and inflation in the country, against which the Scholz was due to announce an economic relief package within days. But Scholz according speech was interrupted frequently with booing and slogans.

“We have become a puppet of the United States”

The former chairman of the Social Democrat Party (SPD) and founder of the party Die Linke (The Left), Oskar Lafontaine criticized the government heavily. Stating that “Germany is behaving as a puppet of the United States”, Lafontaine declared his country was “not independent and sovereign”. Lafontaine ciriticized Germany’s Ukraine policy and said “Nord Stream 2 was stopped upon the wish of the United States”.

The growing unrest in Germany will, with the weather getting colder in autumn, turn into open rebellion. German media writes that concerning protests, autumn will be hot, while the winter season even will bring anger. The political parties Die Linke and the AfD (Alternative for Germany) have already started calling for the so-called Monday Protests. The Monday protests became first popular at the last days of the German Democratic Republic, when thousand protested in eastern Germany against the regime, and later continued all over Germany against neoliberal reforms concerning employment policies.

“Stop the war, not the welfare”

Another country witnessing protests in the United Kingdom. Supply chain shortages following the Covid-19 pandemic had already shaken the British economy. Following several scandals, among them a party violating pandemic rules, had forced Prime Minister Boris Johnson to resign. While Britain was waiting for the new Prime Minister to take office – Liz Truss has meanwhile won the according election in the Conservative Party – the waters in Britain’s public were also warming up.

The country faces daily protests against inflation and decreasing purchasing power. The protest actions, announced in August under the title “Enough”, are spreading all over the country. Currently, there are more than 50 long-term protest actions taking place in different parts of the country, criticizing the government for its policies. The protest actions tale place with slogans such as “Stop the war, not the welfare”, and are targeting above all increasing energy prices due to Russia sanctions.

The Czech Republic, country with a population of 11 million and member of the EU, has witnessed past weekend a gathering of thousands of people protesting the EU and NATO. Gathering in the capital city of Prague, thousands have protested against their government taking a side in the Ukraine crisis and demanded negotiations and agreement with Russia. The police stated that around 70 thousand people have taken part in the protest. The protest meeting was held in the centric Wenceslas Square, one day after the opposition had forced to a confidence vote against the government due to the latter’s political passivity in face of inflation and energy prices. The government has won the vote with a short margin.

Jiri Havel, one of the organizers of the protest, commented in the news portal iDNES.cz: “The goal of our protest is to demand a change in order to solve the problem of energy prices, starting with electricity and gas, which otherwise will crush down our economy in this autumn”.

Government called to step down

The protesters also demanded the resignation of the current coalition government under the leadership of Petr Fiala. They also expressed that EU’s sanctions against Russia are damaging the Czech people and economy, thus called for an end of them and for their country to become neutral in the conflict.

Prime Minister Petr Fiala evaluated the protest as “Pro-Russian”, claiming that these were harming the country’s interests. He added there were a lot of people in his country believing the Russian propaganda and disinformation campaigns.

“We have become the bridgehead of the West”

Greece, where relations with Russia have almost reached the point of rupture since the Ukraine crisis erupted, is another country where the government faces huge criticism. The leader of the main oppositional party, SYRIZA, Alexis Tsipras, claimed that Greece had become “the bridgehead of the West” and added: “I hope that will not be necessary. But let us not fool ourselves: In case we need to defend our sovereignty, we will be left alone.”

Tspiras has warned the Greek economy would pay a high price for the sanctions against Russia. The former Prime Minister of Greece added: “Even if our conflicts with our neighbors remain only at the level of discourse, they will have severe consequences especially in the summer.”

In Italy, the anti-Russian government of Draghi collapsed

Governments throughout Europe are not only shaken, some of them are even collapsing and resigning. The government of Mario Dragi in Italy, famous as a representative of Atlanticist policies, has collapsed already in July. The government crisis had begun with the 5-Star-Movement criticizing and rejecting Italy’s arms support for Ukraine. The Western press reported about the resignation of Draghi with the headline ‘Putin’s victory’.

The German media Deutsche Welle commented: “Draghi’s fall will not only be a reward for Russian President Vladimir Putin, it will also endanger the European Union, the Euro and policies towards Ukraine.”

Germany, the United Kingdom, the Netherlands and Spain…The wave of trade union strikes is growing and expanding. Strikes in the service and agriculture sectors are affecting transportation and food prices. Facing long and intense working hours leaves workers no other choice but to strike. Farmers meanwhile stop production due to rising gasoline prices and take their protests into the centers of cities.

Thousands of flights cancelled since June

Air transport is one of the sectors most affected by strikes. Hard working conditions and the lack of personnel has pushed the employees to strikes. Employees of companies such as Lufthansa, Ryanair and EasyJet, some of the biggest in the industry, have been going on short and long-term strikes. Pilots are refusing to fly, while ground service employees’ strike, resulting in cancellations of thousands of flights, while the luggage of thousands of passengers on vacation trips were not delivered. The pilots of Lufthansa, Germany’s biggest airline, went on a 24-hour-strike on August 2nd and 800 flights were cancelled. This cancellation affected more than 130 thousand passengers.

One of the cities with most strikes was London, the United Kingdom’s capital. The bus drivers and underground employees went on strike here. The trade unions are fighting for acceptable wages and working conditions for their members in the middle of a crisis in costs of living, while strikes have collapsed public transportation and critical services for months. The traffic in the city has become chaotic. While the use of individual private transportation increased, people often were not able to get to their final destinations on time.

“No farmers, no food”

On the weekend, all of France’s big trade unions (CFDT, CGT, FO, CFE-CGC, CFTC and Solidaire) gathered to talk about the strike scheduled for September 29. There are already plans for several protest actions and meetings in the coming weeks. While the trade unions except CGT and Solidaire favor talks with the government, the CGT insists on striking.

All these unions have signed a joint declaration on August 28. They will protest on September 29 together and plan jointly an initiative for a Saturday during the month of October.

They are worried about topics such as inflation, energy crisis, retirement and the insurance for unemployment. The public anger will be carried onto the streets in autumn. Wages are the priority topic.