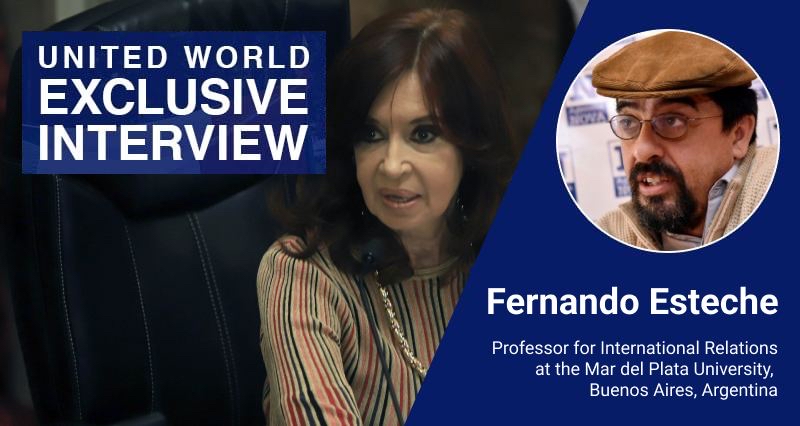 Argentina’s Vice President Christina Fernandez de Kirchner has been victim of an assassination attempt on September 1st in Buenos Aires. She survived the attempt, because the assassin’s gun, pointed at Kirchner from a very close distance, jammed and did not fire. Media reported that the gun was loaded with 5 bullets.

We spoke about the assassination attempt with Fernando Esteche, Professor for international politics at the Mar de la Plata University of Buenos Aires, Argentina.

What is known about the assassin yet?

We know that he has Brazilian citizenship, belongs to the middle class and has a long enduring personal love relationship. He has been very critical of the government for a long time. There is an interesting fact, actually: The assassin has been frequent guest to several TV channels. When these pursue interviews on the streets, investigating the people’s thinking and evaluation on politics, frequently this assassin appears as a random representative of population. And he displays a great capacity of presentation and arguing.

Media has reported about previous attacks on Kirchner, for instance, when during protests stones were thrown to her flat, hitting very close to her working desk. Do you see any connection of these attacks with the recent assassination attempt?

No, I do not see any connection with the protests and stone throwing that you and parts of the press and the recent assassination attempt. There is an important point I would like top make here: The more we focus on the person of the assassin, the more we move away from the historical truth. This was an attack where we know the perpetrators.

Christine Fernandez de Kirchner was in the news in the last days in the context of judicial accusations. Do you refer to these as the perpetrators?

In the most recent days, Kirchner became victim of a series of acts of symbolic violence: The police was dispatched to her house, mistreating members of her family, on orders of the Buenos Aires mayor. The fences placed around her flat. Than there was the police violence against Maximo Kirchner, a Deputy of the governing Frente Para Todos coalition – an act ordered by the Police Commissioner of Buenos Aires…

These acts of provocations are driven by the oppositional Juntos por el Cambio coalition, led by former president Macri and Patricia Bullrich, Chairwomen of the right-wing Propuesta Republicana party.

They are the forces behind the lawfare against Christina, where the prosecutor recently demanded a punishment of 12 years imprisonment of her. But that all the evidence in that case was reduced to news published by the conservative newspapers Clarín and La Nación. These two newspapers represent other groups of power.

Hence, the popular movement in defense of Christina Kirchner grew stronger, and the conservatives reacted by starting this series of attacks. Taken all together, these indicate an attack on democracy and an attack on all popular organizations.

There have been recently messages of solidarity with Christina Kirchner from other Latin American leaders. Do you evaluate the assassination attempt in a continental context?

Of course. This is a message to Mexico’s President Lopez Obrador, to Colombia’s recently elected President Gustavo Petro and all other leaders of the Latin American left. Remember that there have been already attempts to assassinate Bolivia’s former president Evo Morales, and recently, the family of Chile’s President Gabriel Boric was attacked too.

The owner of the message is clear: It is the political establishment. And the message they are sending is: games of democracy and elections are allowed, as long as the popular will is contained within the status quo. But in case one of these leaders threatens to leave the allowed margin of politics, other measures will be put in force.

Therefore, this assassination attempts was a message to all progressive Latin American leaders, and they – rightly – are reacting to it.

What is the necessary answer in your opinion?

There is also much discussion within the government of Alberto Fernandez. The government has caused discussions with certain personal appointments, and it delays necessary answers to answer the people’s economic needs.

It is necessary to build a great political counteroffensive that must have manifestations in concrete government measures in favor of the popular sectors and a decided struggle against the forces behind the symbolic violence.

Saturday’s march of solidarity with Christina Kirchner and in defense of democracy and popular will, where hundreds of thousands have taken part, has been an important declaration of will by the people.