Summoning the spirit of Willy Brandt 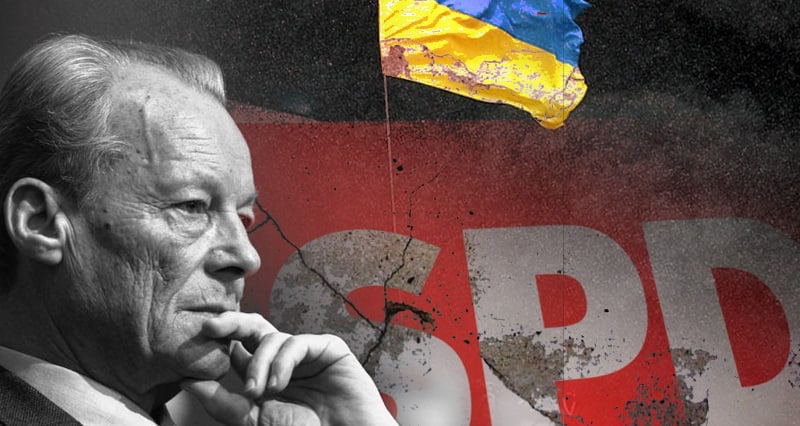 Germany’s governing Social Democrat Party (SPD) has its headquarters in Berlin in the Willy-Brandt-Haus. The website of the building describes it as “not a party castle but an open house, open for political and cultural encounters” (all translations by YS.). This is a clear reference to Willy Brandt’s legendary Ostpolitik – and is used today by those opposing the German government’s policy towards Russia, reflecting cracks within the government.

The German government led by Chancellor Olaf Scholz seems decided to follow a hardline policy towards Russia – in the context of the Ukraine crisis and beyond. The announcement of the militarization of Germany’s and the EU’s foreign policy, an ever-expanding sanctions regime against Moscow and the long-term cut of bilateral economic relations beginning with the energy sector provide examples of that policy.

But although the government raises Ukrainian flags on all official buildings, not all agree with this policy. Parties in opposition reject it on grounds of either geopolitics, criticizing specifically NATO enlargement, or its domestic costs, specifically the additional spending for arms industry while a soaring inflation and energy prices lays a heavy burden on the population.

But recently, different voices have begun to speak out even within the government. And they defend their position with the name of: Willy Brandt!

From 1966 to 1969, Brandt was Germany’s foreign minister, when the SPD was minority partner in a coalition with the Christian Democratic Union (CDU). From 1969 till 1974, the SPD succeeded in gaining the majority of votes, with Willy Brandt becoming the Chancellor. He than initiated the so-called Neue Ostpolitik (New Eastern Policy), which consisted in opening the dialogue with the socialist camp including the German Democratic Republic. This policy substituted the former hardline approaches of the Cold War, and claimed to achieve “change through rapprochement”, as his long-term assistant Egon Bahr had formulated it.

Trying to ease tensions with the Socialist Block, Brandt entered a comprehensive dialogue with first the Soviet Union and later other members of the block. These culminated in agreements between the Federal Republic of Germany and the Soviet Union, Poland and lastly the German Democratic Republic, including official bilateral recognition.

Just a day after Chancellor Scholz has presented himself in a German panzer, a number of high-ranking SPD members voiced their opposition to his policy on August 27, citing the following Brandt’s expression “Peace is not everything, but without peace, there is noting”.

Initiative for peace within the governing SPD

The according public statement was signed by a number of SPD members of German and European parliament, former city mayors and academics.

Titled “the arms must be silenced”, the statement begins with rejecting “Russia’s unjustified and illegal offensive war” and declares its solidarity “with the people of Ukraine and those Russians who oppose the war”. But what than follows is a broad criticism of Western positions and a call for diplomacy.

The authors demand “neither NATO or any Western country should be party to the war”, state that “this war will not be won militarily”, remind of “the threat of global recession including rising unemployment” and warn “of the renewed risks of nuclear war”.

Saying “this war not produce a winner”, the signatories state:

“We need a ceasefire as fast as possible to open the road for a comprehensive peace agreement. It is the time of diplomacy. The EU and its member states must use their diplomatic step up efforts to promote a ceasefire. To do this, the exchange with previously neutral countries such as Indonesia, India or South Africa, but also intensified talks with China must be underkaten in order to persuade them to act as mediators between the fighting parties. The United Nations also must start new initiatives.”

The authors claim that “a fundamental improvement of European – Russian relations will only be possible in a Post-Putin-Era”, but add that “in the meantime, we have to acknowledge realities we don’t like and find a modus vivendi with the Russian government that avoides a further escalation of conflict”.

And here, the signatories present again and again Brandt’s Ostpolitik as a positive example to achieve peace and construct a European security architecture.

Debates about Brandt and the party program

The reference on Willy Brandt is not new. Back in May, the Chairman of the SPD, Lars Klingbeil had declared that the party was “proud” of Brandt, but added that the Ostpolitik had to be revised. The party’s program still states “There can be no peace in Europe without Russia, and peace is only possible in cooperation with Russia” – Klingbeil said “this sentence is not valid anymore” and announced the establishment of a commission to revise the program.

The recent initiative has caused protests from the co-governing Greens and the opposing CDU, but was followed shortly after by another announcement of support from within the SPD.

On the gathering of the parliamentary fraction of the SPD in Dresden beginning September, other members of parliament also demanded “more intelligent solutions” for the Ukraine crisis. The party’s spokesperson, Bernd Westphal was quoted by Der Spiegel as saying “we need a new peace intiative by the SPD”.

In the same debate, the party’s Chairman for the Committee of International Relations in the parliament, Micheal Roth responded that “Putin wants to divide our societies”.

While the Chancellor Olaf Scholz contunies demonstrating support for Ukraine and defending his Green Foreign Minister Baerbocks’s words, that “no matter what German voters think, we will continue to support the Ukrainian people as long as necessary” – the SPD crushes down in polls.

As recent poll by German news channel RTL/NTV shows the SPD at third place with getting only 17% support. The polls provides other interesting insights as well: 87% of the German population supports talks with Russian President Putin, and 77% support that the West should encourage negotiations.

Hence, the debate about Brandt’s shadow in current politics seems prone to continue. But there is a serious obstacle for a return to easing tensions and opening dialogue.

Brandt’s Ostpolitik back in the late 60s relied also strongly on a new wind coming from Washington. Then President John F. Kennedy held a fundamental speech in 1963, saying the following:

“In short, both the United States and its allies, and the Soviet Union and its allies, have a mutually deep interest in a just and genuine peace and in halting the arms race. Agreements to this end are in the interests of the Soviet Union as well as ours. And even the most hostile nations can be relied upon to accept and keep those treaty obligations, and only those treaty obligations, which are in their own interest.”

The speech was considered a turn in the Cold War towards a more conciliatory approach towards the Soviet Union.

Brandt’s assistant Egon Bahr has picked up that speech as a point of clear reference, when he laid the foundations of what later became the Ostpolitik.

Chances for a Brandt-revival in Berlin seem to be low as long as in Washington prevails the spirit of Biden.

One response to “Summoning the spirit of Willy Brandt”