Defense Committees for the Fourth Transformation 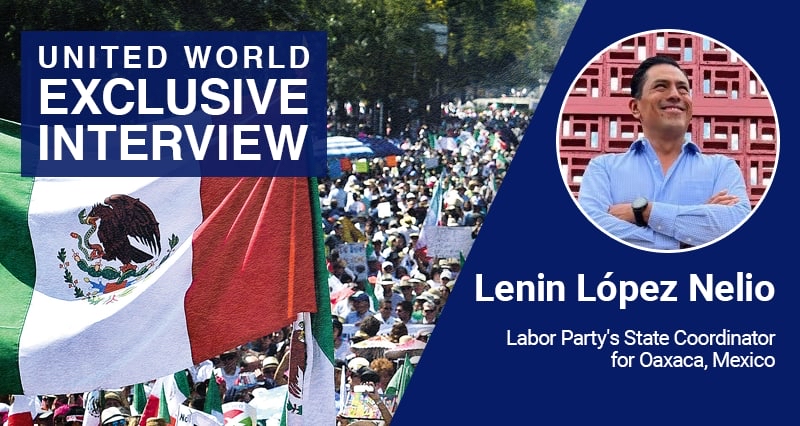 Mexico’s Fourth Transformation is continuing in a high pace. President López Obrador, who faces strong resistance both from domestic political forces as well as the United States, pursues reforms in energy, banking and agriculture.

Meanwhile, his party MORENA (Movement of National Regeneration) is fighting a strong battle with its ally, the Labor Party (Partido Del Trabajo) both in the parliament as well as regionally.

We spoke with Lenin López Nelio, National Coordinator of the PT in the state of Oaxaca, about the popular dimension of the struggle.

You are expecting that the Fourth Transformation will face strong opposition from the right. Some of that has become already obvious in Mexico’s energy reform. On what do you base your expectation?

In Mexico, traditional and conservative Party of National Action (PAN, for its name in Spanish) and the Party of the Institutionalized Revolution (PRI) have established a block. They have manifested openly their opposition against the reforms that President López Obrador is advancing. They have also gathered around themselves a group of business people and representatives of the media of communication, who openly call to confront the President in both chambers of the state.

During the government of former President Peña Nieto, Mexico’s energy sector has been opened to private and foreign investment. The main argument was that this would decrease the electricity prices.

But not only did that not happen, quite the contrary, the electricity prices were further increased. Moreover, the production and distribution of energy started becoming concentrated in the hands of few companies.

Now, Mexico’s President López Obrador is trying to reestablish the control of the state on the energy sector. And here, the PRI and PAN are resisting, joined by the Party of Democratic Revolution (PRD), which has been founded as a leftist party but today has become a satellite of the other two, right-wing forces.

The people via the state must own strategic industries

Hence, these parties and the mentioned companies together with media are conducting a campaign against the Fourth Transformation and the energy reform.

But we in the state of Oaxaca think that the energy needs to be returned to the people, by handing it over to its government, because this is a strategic industry for the development of the country.

What kind of confrontation do you expect in the course of the Fourth Transformation?

We think that there might be a profound confrontation. Therefore, we have established Committees of Defense for the President in the state of Oaxaca. And we are organizing working groups in the communities, the neighborhoods and the municipalities with the people, establishing information circuits. We are informing the people about the scope of the energy reform and the Fourth Transformation. And we are also inviting the people to action and public presence.

If there is the need to mobilize the people and the masses to help the president to consolidate the reform, we want to be ready. We have gone through earlier experiences: when presidents in Latin America did not have popular organizations, they have become victims of coup d’états. We do not want that to happen in Mexico. Hence we are organizing this popular movement to defend the president during the transformation.

You spoke of a coup. What exactly do you refer to?

The conservatives might start conspiracies. In that case, they will not be able to count on the Mexican Armed Forces. The Mexican Armed Forces have taken the decision to march together with the President López Obrador. The President has confidence in the command of the military, so much that he included them to be part of the Transformation: They were given the duty to construct the airport of Felipe Gonzalez (Mexico City’s new airport, YS), they are managing the customs, a wide range of civil duties, responsible for security with the Guardia Nacional.

Mexican Government has turned the Armed Forces into an ally

This all means that the Government of the Fourth Transformation is well aware that the role of the military is fundamental, and it has turned the Armed Forces into an ally.

What we observe is intent by the right to attack the prestige of the government and advance a campaign against President Obrador. And obviously, at the certain moment, they will try to stop these reforms that we are advancing. But we know they will not be able to count on the military in that purpose.   And for that purpose, we have started these Committees of Defense in the state of Oaxaca and are working to provide an example for all Mexico.