Possibility of diplomatic talks between Türkiye and Syria; A critical resolution by the Vatan Party; 2022 Islamic Solidarity Games held in Türkiye 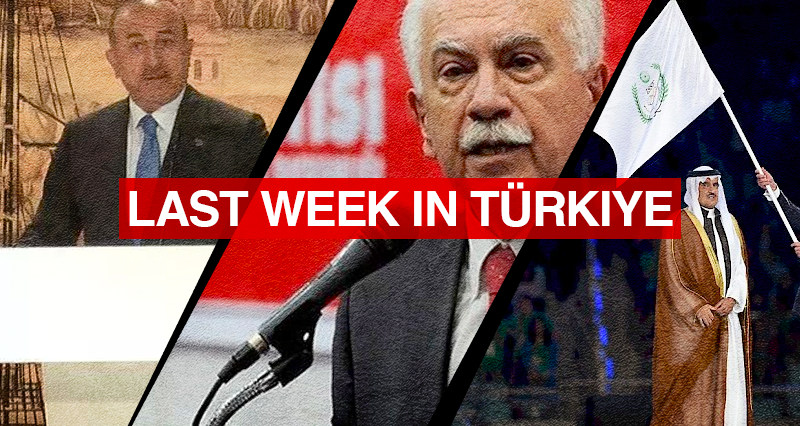 3 critical issues were on the public agenda in Türkiye in the last week.

Turkish officials’ statements regarding the talks with the Syrian government and a normalization process were dropped on the public agenda like a bombshell.

And finally, the 5th Islamic Solidarity Games of 2022 were held in the Central Anatolian city of Konya.

Erdogan: “We need to ensure some advanced diplomatic steps with the Syrian government”

In his announcements to the media on the flight returning from Lviv, President Erdogan made the following statements about Türkiye-Syria relations:

“We do not have our eyes on the Syrian lands because the Syrian people are our brethren. We do not have such ambitions over there. The territorial integrity is highly crucial to us. The regime can be sure about that (…) My hope is for a new constitution to be made as soon as possible in Syria, that the status quo could be secured and that steps to be taken to eliminate all the problems of the Syrian people. All the weight of those who sought a refuge from there, and of those who immigrated, was upon us. We host a total of 4 million refugees in our country. And we are not doing this so that we can be at a constant war with the regime. We are doing this because of our ties with the Syrian people, especially in terms of a common faith. Let us hope that the upcoming periods to be much more beneficial mutually.”

Erdogan also signaled for diplomatic steps to be taken between the two countries;

“We need to get this fact and accept it, once and for all. Political dialogue or diplomatic ties between states can never be cut off completely. There are, and should be, always such dialogues happening at any time. There is even a Turkish proverb, ‘Do not snap the tie even in a yarn, let that tie loose. One day you may need that tie.’ Now we continue our contacts with Egypt at a lower level of ministers in, for example. These things do not come out of nowhere. You cannot completely disable the diplomatic ties. The whole world has seen how much we need diplomacy today. We have always been a part of the solution. It was us who gave a hand to solve the Syrian problem. Our goal has always been to keep the regional peace, and to protect our country from the risks of the serious threats of this crisis.”

The Minister of Foreign Affairs Mevlut Cavusoglu has made the following statements on the same subject:

“We have kept saying that this agreement is essential for a long-lasting peace. We said that the regime and the opposition should come to an understanding. That is exactly what I said previously. What was the purpose of the Syrian opposition to set up a negotiating table? The purpose of this table to negotiate the government’s transition process with the Assad regime. This is not the first time we are trying to bring the regime and the opposition together. But this was what we said for a long-lasting stability in Syria.“

And the leader of the government ally Nationalist Movement Party, Devlet Bahceli, also made statements about the normalization of relations with Syria.

“The constructive and realistic statements from our Foreign Minister on the establishment of peace between the Syrian opposition and the Assad regime provide fresh air to the search for a lasting solution. No one is supposed to be annoyed from this. It is currently one of Türkiye’s agendas to raise the level of dialog with Syria to the level of political negotiations and the elimination of terrorist organizations from all areas, with a regional cooperation and even worthy of being seriously addressed.”

On the other hand Vatan Party leader Dogu Perincek has shared the information to the media that a delegation headed by him is to visit Damascus to meet with Syrian President Bashar al-Assad.

Perincek shared the following on the subject:

“They have been inviting us for seven or eight months. Our party already held talks with Russia. Ethem Sancak, Sule and Mehmet Perincek already held talks in Moscow. We are in touch with Iran. We are also negotiating with the Turkish government. And as a result, we will held these meetings in the plan of eliminating the terrorism threat in Syria, ensuring the territorial integrity of Syria and creating conditions for our Syrian guest brethren to return to their homelands.”

Perincek stated that the invitation came from the Syrian President Bashar al-Assad and said the following about the main goal of this visit:

“Mainly to end the terrorism threat and to ensure a safe return of our guests in Türkiye back to their homes. Syria has already announced an amnesty. And we will provide a full guarantee. They will go back to their jobs safely. Nothing will happen to them. In addition, the total elimination of the PKK requires a cooperation with Syria. Ours is an alternative… Tayyip Erdogan instead suggests a 900 kilometers long, 30 kilometers wide, safe zone, which is not a permanent solution.”

The Central Executive Committee of the Vatan Party has published a resolution containing important assessments on Türkiye’s general political course.

Some of the important parts of the resolution are as follows:

“Our homeland Türkiye is at a historical threshold. Our state and our nation are facing great challenges. The program of destroying the nation state, the integration with the world economy and cultural corruption implemented in Türkiye since 1980 has failed. Both our state and our nation are deeply in debt. That is the point where the Atlantic System comes to an end. The Republic of Türkiye has struggled to survive against the Atlantic System with its government, army, security forces and public administration institutions. The Gladio that NATO has placed in the state and army of the Republic of Türkiye has been crushed by the Turkish army and the Turkish nation and is being purged from state institutions. The US imperialism is being defeated in every region of the world. The reign of the Dollar is collapsing, and thus the tribute system of the United States is being destroyed. China and India are now at the forefront of the development of the world economy. Despite all the arrangements of Washington, European countries have come to the edge of breaking away from US control. We have come to the end of the Atlantic Era. A humanist, populist, publicist, sharing, libertarian and democratic civilization is rising from Asia. When we look at the world, region and domestic situation in total, Türkiye has entered the revolutionary conditions for the first time after the War of Independence and the Republican Revolution. The system is not operating and the people and the state are going out of the system. We have a challenging period ahead of us. The Homeland War and the Production Revolution process will reach the goal with the National Government of the Producers. The time has come for the Vatan Party. As practice has proved, the Vatan Party is the Homeland War leader and the Production Revolution process. We are moving from the construction of a Vanguard Party to the era of Organizing the Nation. Our Party, which has an unrivalled position in the youth masses and the women’s movement, is growing rapidly in all regions of our country, from workers and farmers to industrialists and merchants, among all productive classes and gaining members from all parties. The possible solutions inside the system are invalid. We have come to the end of the period when the AK Party ruled Türkiye alone. The National Government of the Producers, in which the Vatan Party is at the center, is the only solution and is inevitable. We will not let the chaotic organizations of the United States in the process leading to the election. We will never take part in the same front with FETO and PKK/HDP terrorist organizations. We will disrupt the plans of the Biden Alliance, the so-called Table of Six, to free FETO and the PKK from prison and reintroduce them to State rule. On the other hand, we will not be a partner in the insolubility of the AK Party government, which adapts to the Atlantic system and ignores the Production Revolution. We will create the power option for the nation and the Producers. For this purpose, we are ready to act together with all the forces of our nation. We call on all our citizens to become members of the Vatan Party to march together on the front line over the difficulties and to their duties to govern Türkiye. We want government authority from our nation for producing and dignified Türkiye. As the Homeland Party, we are ready for every task and sacrifice for the Turkish nation and humanity with our current program, tested policies, experienced leadership that has coped with many challenges, and dynamic youth that is the insurance of Türkiye. We announce it to the Turkish Nation and the world public with respect.”

More than 2 thousand athletes from 56 countries, including Türkiye, have taken part in the Games.

The games, in which competitions were organized in many branches such as football, basketball and athletics, were finished.

Minister of Youth and Sports Mehmet Muharrem Kasapoglu shared the following information about the games:

“We are hosting an event that brings the entire Islamic world together with such contributions. Konya is known as the city of tolerance, being the city of Mevlana Rumi. And this is an event that brings the Islamic World (the Ummah) together in the difficult periods that the world is going through. And our beloved country Türkiye and one of our exemplary cities Konya was chosen. I am happy to say that we have raised the bar of this meaningful organization to a very high peak.

(…) We have never seen such participation to these games before. This had been the most comprehensive, and the largest sports event of 2022.

Türkiye, which hosted the organization where the opening ceremony was held on August 9th although the competitions were held since August 5th, was remembered by the successes of the national athletes.

In the organization, where more than 4 thousand athletes from 54 countries participated in a total of 24 different branches, national athletes broke the game record by taking a total of 341 medals, including 145 gold, 107 silver and 89 bronze.

Türkiye, which went down in history as the country with the most gold and total number medals in the history of these Games, was followed by Uzbekistan as second and Iran as third in the number of medals.