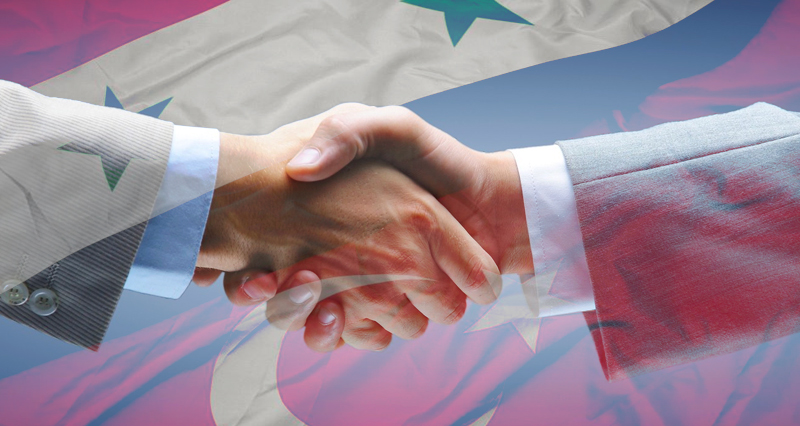 There is nothing as natural as the normalization of relations between Türkiye and Syria. This should have happened much earlier, but it is very important that such progress has taken place, albeit with a delay.

UWI expert, political scientist and writer Mehmet Perinçek evaluated the relations between Türkiye and Syria and explained the details of the visit of Doğu Perinçek, the leader of the Vatan Party (Türkiye), Damascus.

Turkish President Recep Tayyip Erdoğan has given green light to a possible normalization between Türkiye and Syria. Erdoğan said on his return from a visit to Ukraine “First of all, we must know and accept that political dialogue or diplomacy between states can never be cut off. There will and should always be such dialogues at any time.”

Özgür Bursalı, Secretary General of the Vatan Party, said that a delegation headed by Doğu Perinçek would visit Syria within 15 days to meet with Syrian President Bashar al-Assad.

Below we present the interview published by the Iranian Mehr News Agency with Mehmet Perinçek.

There has been a lot of talk lately about possible contacts between Ankara and Damascus. If we look at the words of Turkish officials, we can say that the media reports are not just allegations and that the relations between the two countries are likely to enter a normalization process. What is your opinion on this issue?

There is nothing as natural as the normalisation of relations between Türkiye and Syria. This should have happened much earlier, but it is very important that such a progress has taken place, albeit with a delay. Normalisation of relations will play a key role in terms of regional security. It will make a very serious contribution to the disruption of the US and Israel’s plans in the region. It should be noted that Damascus and Ankara should not content with only normalising relations, but they should also cooperate. They should cooperate both in terms of security, against PKK and PYD, and in the economic field, and for the sources of energy as well. The US is currently stealing Syria’s oil together with PKK and PYD. Türkiye can work with Syria to prevent this and then use it for the welfare of the Syrian people.

Statements by Turkish officials suggest that in order to pave the way for Türkiye to re-establish relations with Syria, a compromise must first be reached between opposition groups and Bashar al-Assad.  Do you think this method is accurate?

The East of the Euphrates and Idlib as a single front

Today, the Assad administration is the legitimate government of the Syrian state. Therefore, Türkiye’s only interlocutor in Syria should be the Damascus administration. Every element and group aiming to disrupt the territorial integrity of Syria must be eliminated. Terrorist groups such as the PKK must be eliminated. The east of the Euphrates and Idlib are actually a single front. A policy should be pursued to abolish autonomous structures in these two regions.

Distinction between the radical and and the moderate armed groups

It would also be accurate to make a distinction between radical armed groups and other more moderate armed groups. This is what was already decided in the Astana format. Türkiye should by no means allow these autonomous structures to become consolidated. The government in Damascus should seize control over the whole of Syria, which is also in Türkiye’s interest.

In this context, various measures can be taken to integrate moderate armed groups into Syria’s territorial integrity and Syria’s state, as well as to ensure the return of some opposition groups in Türkiye to their homes, in an orderly manner, through amnesty and other methods. Türkiye should support the Damascus administration in these matters. On this basis, a compromise can be reached.

Is the news true that Mr. Doğu Perinçek is going to Syria for a meeting with Syrian leader Bashar al-Assad? If so, what topics does Mr. Perinçek want to address at this meeting?

The relation between the Vatan Party and Bashar al-Assad goes way back. This relationship existed even before the outbreak of the civil war. Significant efforts were made to improve relations between Türkiye and Syria. During the civil war, delegations from the Vatan Party visited Damascus several times and took important steps to restore relations between Türkiye and Syria. Now, at the invitation of Bashar al-Assad, Doğu Perincek will go to Damascus with a delegation that will include Ethem Sancak and other important figures from outside the party.

The main agenda: expulsing the US and securing territorial integrity

The main agenda, obviously, will be the elimination of the terrorist organisation PYD/PKK, which the US calls “my ground force”, and ensuring the territorial integrity of Syria, Iraq, Türkiye and Iran in this way. In addition, there will be negotiations on the safe return of refugees in Türkiye to Syria. Certainly, cooperation between the two countries will be discussed not only in the military-political sphere but also in the economic one. The core of this meeting will be the disruption of the US plans and its expulsion from Syria.

There are talks that Türkiye is likely to launch an operation in the northern region of Syria in September. There seems to be a contradiction between the possible Türkiye-Syria dialog and the operation of the Turkish army. What do you think about that?

The possible operation of the Turkish Armed Forces

The operation of the Turkish Armed Forces in Syria will definitely not be against the territorial integrity of Syria. On the contrary, it is a step towards ensuring Syria’s territorial integrity and sovereignty. Yet, Türkiye’s operation absolutely has to be carried out in cooperation with Damascus. Not only coordination but also cooperation is imperative. As you know, there is the Adana Agreement between the two countries. According to the Agreement, the Turkish army has the right to intervene in the region. But of course, this right will never, ever be used in a way that violates Syria’s sovereignty. After the region is freed from terrorism, the Turkish army will withdraw from there. Furthermore, Türkiye should also obtain the support of Russia and Iran in this operation. When conducted in this manner, Türkiye’s operation will be in the favour of all countries of the Astana Process. I underline again: Of course, if only there is cooperation with these countries.