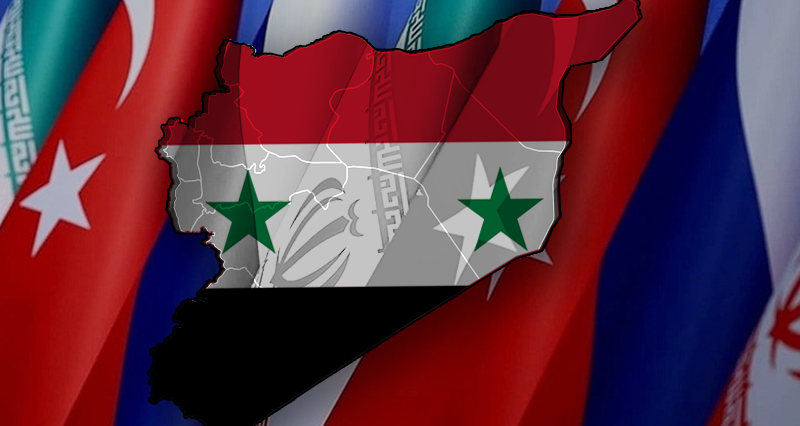 The 5 August meeting in Sochi between Turkey’s President Recep Tayyip Erdogan and Russian President Vladimir Putin has given rise to speculation in the west over Turkish-Russian rapprochement – and its possible negative impact on western efforts to curtail the imminent multipolar order.

Western NATO states have reason to be concerned about Ankara’s recent moves, given the momentum created on 19 July during Astana talks in Tehran – between Iranian President Ebrahim Raisi, Erdogan, and Putin – geared to resolve the Syrian crisis.

United against the States

What was striking about the meeting in the Iranian capital was its defiant tone, slamming US-led unipolarity (the so-called rules-based order), and accusing Washington of looting Syria’s resources and sponsoring terrorism, all while demanding that the US exits the region immediately.

Washington has long sought to undermine the Astana Process, launched in January 2017 by Russia, Iran and Turkey to demilitarize the Syrian conflict and establish ceasefires. To that end, it manipulated Turkey’s ill-defined Syria policy, expecting that Ankara and Moscow would collide head-on over “opposition-controlled” Idlib or elsewhere, thereby hindering possible rapprochement between the two Eurasian states.

However, it seems as if the Erdogan-Putin meeting has instead advanced beyond their earlier encounter on 29 September 2021, also held in Sochi, where it was then leaked that the two leaders had somewhat agreed on a broad geopolitical vision.

The two leaders focused on a wide range of areas of close cooperation – particularly on trade and economy – but also on prospective fields of mutual benefit such as defense industry ventures, as well as on regional issues like Syria, Crimea, and Cyprus.

Although few details have been released following that closed-door meeting, it is interesting to note the discernable change in Ankara’s stance on Syria since then.

There is now serious talk of normalization with Damascus and a renewal of the Syrian-Turkish 1998 Adana Agreement, which will entail a joint effort to defeat US-sponsored Kurdish separatists in Syria, especially in the areas to the east of the Euphrates where the latter are striving to install a US-backed statelet.

As things stand, there is no reason why Erdogan and Putin could not iron out a deal to end the Syrian conflict, especially since Ankara – in an 18-month flurry of diplomatic outreach to regional foes – has largely given up on its Muslim Brotherhood-oriented foreign policy by mending ties with Egypt, Saudi Arabia, the UAE, and even Israel.

The Turkish president certainly has a lot to gain from a well-orchestrated rapprochement with the Syrian government. For starters, Ankara and Damascus could agree on a protocol to repatriate millions of Turkish-based Syrian refugees back to their places of origin, and renew the Adana Agreement to create a common front against the Kurdistan Workers Party (PKK) and its Syrian affiliates.

Conceivably, Erdogan could even ask Damascus to recognize the Turkish Republic of Northern Cyprus – a very dear issue for Ankara – in return for Turkey’s full support for the re-establishment of Syrian sovereignty over all its territories, including those areas currently under Turkish occupation.

With strong Russian guidance, is not entirely inconceivable that the two states could return to a comfortable neighborly states quo, with trade, investment, and reconstruction activities leading the way.

It would be a far cry from the 1998 to 2011 Syrian-Turkish ‘golden era,’ when Ankara studiously worked to bolster friendly relations with Damascus, to such an extent that joint-cabinet meetings were occasionally held between the administrations of Syrian President Bashar al-Assad and Erdogan, where the latter would refer to the former as “my brother.”

Today, the emerging multipolar order makes diplomatic and economic re-engagement all the more conducive, because as NATO’s Madrid Summit demonstrated, the west needs Turkey more than ever, and Ankara’s moves to normalize relations with Damascus is less likely to incur a significant cost than before the Ukraine crisis erupted.

Indeed, even before events in Europe unfolded, Turkey undertook several military operations against the PKK/ Syrian Democratic Forces (SDF) in northern Syria, much to Washington’s dismay and outrage.

Ankara could proceed with these operations with less censure today, but it has not. Turkey appears to have realized – possibly under Russian advisement – that without normalization with Damascus, Turkish military moves on Kurdish separatists would yield significantly fewer results.

Moreover, Erdogan’s administration has been beset by the contentious domestic issue of the millions of Syrian refugees who remain inside Turkey. The days when the president and his close associates were preaching Islamic solidarity in defense of hosting Syrian refugees have long past.

The mood across Turkey has changed dramatically amid rising inflation, a collapse of the lira, and the general public’s disenchantment with the ruling Justice and Development Party (AKP). For the first time since Erdogan’s ascension to power in 2003, the masses sense that his once-unbeatable, Islamist-leaning populist party may be defeated in upcoming presidential polls slated for May-June next year.

True or not, there are public rumblings that the AKP – to escape an election loss – plans to bestow millions of Syrian refugees with Turkish citizenship, allowing them to vote in the pivotal polls.

The disoriented outlook of Turkey’s main opposition party has always played to Erdogan’s advantage in previous elections. The feeble-looking Kemal Kılıçdaroğlu, who took the helm of the Republican People’s Party (CHP) after a sex scandal involving its previous leader, has never managed to rally the public around him.

Importantly, Kılıçdaroğlu has typically trailed behind Erdogan in opinion polls because of his pro-American, pro-EU approach to almost everything – at a time when anti-US sentiment in the country polls at a startling 85 to 95 percent of the population.

Furthermore, Kılıçdaroğlu and his party do not make any clear-cut pronouncements about a peace with Syria. If anything, the CHP was as critical of Assad as Erdogan’s AKP, and its spokespeople barely weighed in on the divisive Syrian refugee issue, even though economically-challenged Turkey currently hosts more refugees than any other country.

The entry of a new figure – Ümit Özdağ, a professor of Political Science and International Relations, who recently formed the Party of Victory (Zafer Partisi) – onto the Turkish national political scene, has introduced a radical change in the discourse about Syrian refugees and their repatriation.

Almost overnight, Özdağ has gained widespread support from voters across the political spectrum. His unexpected surge in the polls has clearly contributed to a reassessment by the government and ruling party on the Syrian issue.

Today, almost all voices from the CHP to the AKP are floating arguments for some sort of repatriation, but as even the Turkish public understands, this cannot be done without normalization with Damascus.

Hence, Erdogan’s test-balloon musings to Turkish journalists on his flight back from Sochi, hinting that Putin had repeatedly recommended that Ankara coordinate with Damascus on any military operation in Syria to rout out the PKK/SDF.

Despite the positive national outlook on normalizing with Syria, Erdogan won’t have a smooth path ahead. Turkish foreign minister Mevlut Cavusoglu’s untimely remark a few days ago that Ankara should try to bring the Syrian opposition (a clear reference to the Turkish-backed Syrian National Army) and the Assad government together with a view to striking a deal, didn’t go down well at all with those oppositionists.

It almost led to an uprising in Syrian areas under Turkish control – particularly in Azaz, where militants burned down Turkish flags and vowed to fight to the bitter end against the “Assad regime” and even Turkey.

The statement the Turkish Foreign Ministry issued following these events underlined the long hard slog to a Syrian peace settlement, and revealed the depth of the Erdogan government’s involvement with these militants.

As it has predictably done since 2011, the FM statement conveniently shifted blame back onto the Syrian government for foot-dragging toward overall peace and reconciliation.

But Ankara desperately needs to drop its tired old refrain: demanding that Damascus agrees to a new constitution, pushing for federalization of the state, and insisting on new Syrians elections, under a care-taker government, composed of opposition politicians, and preferably without Assad at its helm.

Having failed to oust Assad militarily, Turkey once imagined it could unseat him through this convoluted political and electoral formula. Erdogan’s logic was that the millions of Syrians under Ankara’s influence – both in Turkey, as well as in Turkish-controlled Syrian territories – in addition Syrian Kurds in areas under the PKK/PYD, especially to the east of the Euphrates, would vote Assad out.

Trading the ‘rebels’ for the Kurds

This ‘fantasy’ contrasts sharply with realities on the Syrian ground, and also totally undermines Turkey’s own national interests.

Years of these haphazard AKP policies, premised on the unrealistic scenario of a sudden collapse of Assad’s government, all while stealthily transforming the country into a jihadist paradise – in the name of democracy – has instead become Ankara’s biggest foreign policy quagmire, and has emboldened its separatist Kurdish foes as never before.

Furthermore, Erdogan’s disastrous Syria policy has isolated Turkey for almost a decade in the region, even among Sunni states, and threatened to set off a conflagration with Russia, a major source of energy and tourism for the Turkish economy.

In fairness, the Turkish leader appears to be making some sound political maneuvers of late, and reaching out to Damascus is the most important of these for the region’s stability. Whether Erdogan will crown his new grand foreign policy moves with a Syrian peace by normalizing relations with Damascus remains to be seen.

If he doesn’t take this bold step, particularly in advance of Turkey’s presidential elections, Erdogan runs the risk of joining the long list of politicians determined to oust Assad, who have themselves left or been ousted from office under the weight of the so-called “Assad Curse.”

This article has been previously published on The Cradle.co here.