Germany is heating up 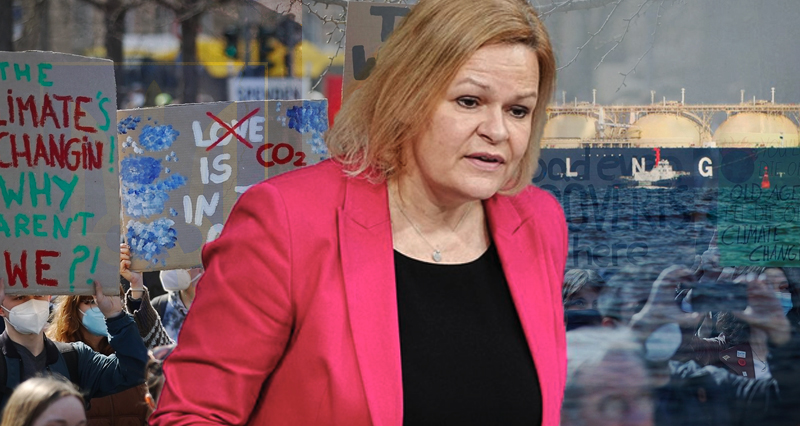 The tensions in Germany following the government’s turn around in energy politics are increasing. On August 14, the minister of interior, Nancy Faeser stated in an interview that Germany had “to be prepared for possible attacks on gas terminals”.

The minister gave the interview to Bild Am Sonntag, Germany’s most selling newspaper, on past Monday. In the interview, Faeser spoke about possible Russian disinformation campaigns and cyber attacks in the context of the Ukraine crisis. The minister announced an investment of 10 billion Euros within the next 10 years for that purpose.

Asked whether she was worried about possible attacks on Germany’s energy infrastructure, Faeser responded:

“We have to be prepared against possible attacks on gas terminals and other critical infrastructure. Besides of the Russian threat, this is also about fighting extremism by all means. We are alarmed by the attempts of left radicals to make use of the environment protests. We are taking this very seriously. On the other side, we also see the threats from the right.”

The minister’s interview was published when hundreds of environmentalists occupied in the city of Wilhemshaven the construction area of a gas terminal. LNG imports from the US and other countries to Germany are scheduled to arrive at the terminal starting from autumn.

Another protest erupted in Hamburg, when thousands blocked a liquefied gas terminal in the city’s main port. Protesters stated that LNG exports were not a solution to the evolving gas crisis in the country.

The increasing LNG imports to substitute imports from Russia do not only cause the protest of environmentalists. The according price increase is a matter of deep concern both in macroeconomic terms and social stability.

In this week, gas prices passed for the first the time benchmark of 500 Euros, with not decrease in sight, Bloomberg reported.

The German government meanwhile announced a redistribution package concerning gas prices on Monday. According to the reform, end consumers will pay 2.4 cent per Kilowatt/hour, in addition to the already existing price increases. Germany media expects this governmental increase a 4-member family’s spending by up to 500 euros. This comes on top to the already occurring prices increases.

The measure is scheduled to stay in force until 2024.

The government defended the measure as a necessary step to protect the gas importing companies from bankruptcy in face of increasing import costs.

Together with increasing inflation, approaching 7%, the population is facing severe economic problems. In a survey conducted by INSA institute 51% of the questioned expressed worries they would not be able to pay their energy bill in the winter. 56% said their economic situation had worsened over the last year. And 65% of the questioned said they were expecting mass protests and popular insurgencies in autumn.

Questioned whether she agreed with foreign minister Annalena Baerbock, who had warned against possible popular insurgency, Faeser stated she did “not expect popular uprisings”.

In another interview, Chancellor Olaf Scholz acknowledged the “citizens were going through hard times”, but did not forecast any social uprising.

On August 18, the Chancellor announced the reduction of the VAT from 19 to 7% for gas consumers. Scholz stated this decrease would ease the pressure on consumers to a level below the redistribution measure, and added: “The issue of justice is decisive to keep the country united in these times of crisis”.

But while the politicians and experts are discussing whether the population will take on the streets to protest prices and inflation in autumn, the German armed forces are undertaking another exercise.

Already in December 2021, they undertook “crowd and riot control” (CRC) exercises for cases when the police was not able to cope with riots. The exercise was undertaken in Kosovo, but media already comments its results may prove useful in the streets of Berlin.