Globalists’ fear of election and the confrontational American society 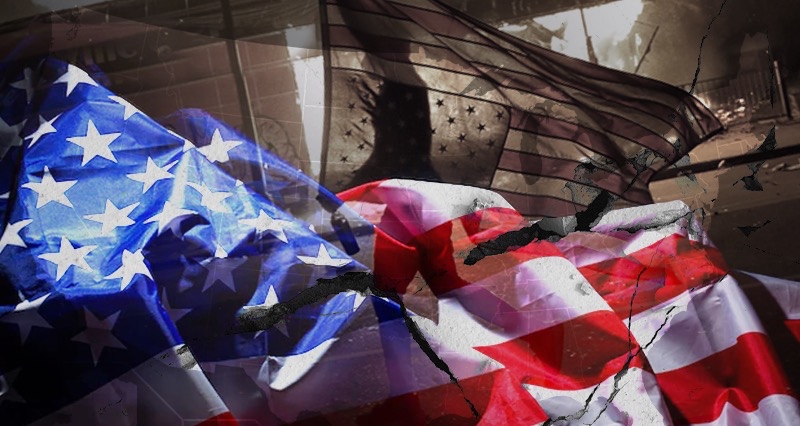 The American society has become divided in a way reminiscent of the Civil War of 1860. With the Capitol Raid and the FBI raid on Trump’s house, swords have been drawn between nationalists and globalists. The November 8 Senate elections are of historic importance not only for the US but also for the world.

This has finally happened! The FBI raided the home of former US President Donald Trump and scoured for documents related to the former president and the 2020 elections. This is a sign of a new era for the US, the so-called champion of democracy and human rights. You can also see this in the thousands of comments on social media after the FBI raid. Since Facebook is mostly a social media outlet for Democratic Party leaners and has banned Trump supporters, the comments are “in a holiday mood”. You can read thousands of comments nowadays that the raid on the house of Trump, their President just two years ago, is a triumph of democracy.

How did the US get to this point? How did the two-party system, which has been the prevailing political system since the US was founded in 1776, turned into two hostile camps? What are the consequences of this confrontation for the US state and its future? It is necessary to understand them, as any radical change in the United States will strongly affect the whole world, and Eurasia in particular.

Domestic peace endured as long as the exploitation was shared

The American Civil War of the 1860s served as a “honeymoon vacation” for nearly 150 years for the contradictions and struggles in the US social structure. The national unity that was achieved, albeit by force, was to bring prosperity to all of the capital owned sector of society as the US, having somehow emerged victorious from the two world wars, established its dominance over the world. The working class and the agricultural sector were also to gain a proportional share from the growing economy through their role in it. That is why there was no significant discontent and unrest in US society until the 1970s.

However, in the new era that began with the Vietnam War, differences, contradictions and struggles that had been suppressed for 150 years surfaced and caused deep social ruptures. The invasion and brutal repression of distant lands such as Vietnam, Cambodia and Laos, which in reality had nothing to do with or threaten the US, functioned as a “wake-up call” for the American people. And since then, American society has been moving towards a radicalism that can no longer be suppressed.

Radicalism came from the left and what might be termed as progressive circles on the one hand, and from the right and religious segments of American agrarian society on the other. Behind these seemingly contradictory concepts of left and right, which would mislead political quarters, lay the deep discontent of the entire American society and the desire for change. The motive for all these discontents was that the US was no longer the world’s dominant power and its generous share of the global pie was shrinking. The shrinking share of the pie has dramatically changed the reality for both the billion-dollar corporations and the American working in a cornfield in the mountains. And every class and groups of the society was bound to take a political stance in line with the changing reality.

Globalization: a fairy tale of salvation

After the collapse of the Soviet Union, with a thousand American ploys and diplomatic mastery, the American rulers planned a new campaign under the banner of Globalization. They have declared the whole world as a wild market for themselves, claiming that every aspect of societies such as economy, culture, social life and politics are now “globalized”. They sought to apply on a global scale the “Wild West” mindset of exterminating the American Indians and establishing a new state on the virgin lands of North America.

When the map of the civil war of the 1860s reappears

Now, in the political and economic sphere, the map of the Civil War of the 1860s, which resulted in 2 million US citizens killing each other, has reappeared. All the coastal states turned Democrat blue, while the traditional and agrarian middle states went Republican red. In the political sphere, this manifests itself in the division between “American Nationalists” and “American Globalists”, represented by Trump and Biden.

We can summarize the most important issues of social disintegration that have recently become sharper in American society, which is divided from top to bottom, from West to East:

1. The US must recognize that it is economically and socially “ill” and must turn inward to prioritize the treatment of these illnesses: This is the position of Trump and the majority of Republicans. On the opposite side, there is the aggressive stance of Biden and the Democrats, who say, “Global sovereignty of the US must be preserved at all costs.” This will be the key issue in the upcoming elections.

2. The Constitutional Court decision to ban abortion: Republicans see it as a question of culture and morality, while Democrats believe it to be about freedom. Almost all rural and traditional voters will keep this issue on the agenda in the upcoming elections.

3. As the economic pie shrinks, strategies in the fight for the share are being debated: American nationalists, under the leadership of a billionaire businessman Trump, advocate the management of the world economy in the manner of an inter-corporate competition and the development of international relations to a certain extent on “win-win” model. The aim is to ensure that the share of the pie, which seems to be shrinking, remains good enough. Biden’s Democrats, on the other hand, dream of protecting and even increasing their share of the pie through aggressive policies.

These key issues will play a decisive role in the US midterm elections on November 8. That is why the aggressive American globalists, led by Biden, have been doing their best for the last two years to eliminate Trump from the political arena. The raid of Trump’s house by the FBI is also related to this. Raiding Trump’s house, even if they know they will uncover nothing in the house, should be interpreted both as a way of intimidating Trump’s supporters and emboldening Biden’s supporters. But for sure, this action will strengthen Trump’s position in American society and contribute greatly to the Republican victory in the November elections. In the primary elections, Trump-backed candidates are already winning in almost all states.

The visit to Taiwan by Democrat Nancy Pelosi, the number two of the US political system, will make even more sense if seen in this context. This was designed and executed by the Think Tanks as an attempt to show how brave the Democrats are, and to ensure that the American people would not give up on them in the elections. The raid on Trump’s house immediately afterwards was planned as another proof of Democrats’ courage. Undoubtedly, they will not succeed and on November 8, the American people will respond to all these. If these last initiatives of the Globalists do not work, I think it is clear that we will enter a period in which methods other than elections will be employed.

Latif Bolat
He was born in Mersin-Turkey. Studied at the Ankara State Conservatory, Gazi University Music Department and Ankara University-School of Political Sciences. Did his graduate degree at San Francisco State University in International Business and Marketing. Worked as a Theater Music Director and newspaper reporter as well as a computer engineer. Finally, he decided to stay as a music scholar. He traveled for his concert and lectures in 40 countries including USA, India, UK, Italy, Iran, Spain, Brazil, Argentina, Sweden, Greece, and many other locations. He produced 5 Turkish Mystic Sufi music CDs and a Turkish Mystic Sufi poetry Anthology in English, titled “Quarreling with God”, published in Oregon, USA. www.LatifBolat.com [email protected]