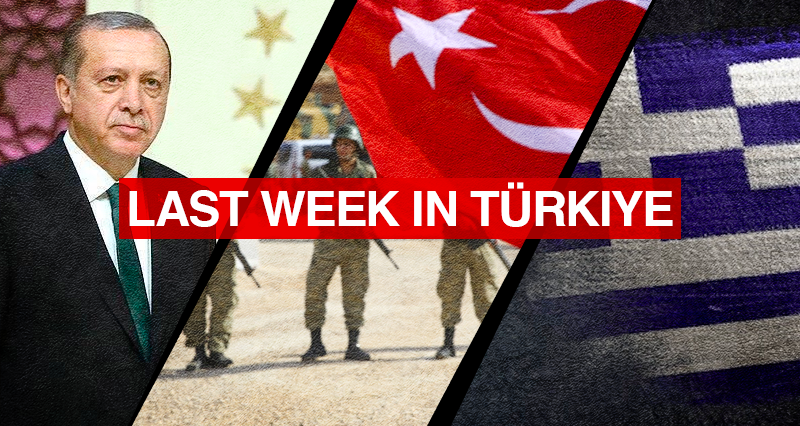 Last week, the public agenda in Türkiye discussed the announcements made after the meeting between the President Recep Tayyip Erdogan and his Russian counterpart Vladimir Putin in Sochi; the alleged possibility of a diplomatic meeting between Erdogan and his Syrian counterpart Bashar al-Assad by the Turkish-government affiliated Türkiye Newspaper; and the recent tensions with Greece.

Erdogan spoke after the Sochi Summit

President Erdogan, who held a critical meeting with his Russian counterpart Vladimir Putin in Sochi, made important statements to journalists on his way back.

Erdogan said his meeting with Putin was “successful” and made the following statements:

“At the invitation of the Russian President Mr. Vladimir Putin, we have concluded our official visit to Sochi in a positive and a successful manner. We have discussed our bilateral relations and international issues in Sochi, after the meeting we had with Mr. Putin in Tehran on July 19th. We have extended the invitation to Mr. Putin to hold the next meeting of our High-Level Cooperation Council in Türkiye.”

Erdogan continued his words as follows; “During our meeting, we have exchanged ideas on the further development of our cooperation in trade and economic areas. We have previously stated our target in trade as 100 billion USD. Towards that end, we want to develop our cooperation in areas such as trade, tourism and agriculture and especially the energy sector. We are determined to ensure that our bilateral trade volume reaches a much more balanced. A memorandum was also signed in Sochi, as a roadmap for our economic and trade relations by our Minister of Trade and the Russian Deputy Prime Minister Alexander Novak.”

Referring to the cooperation with Russia in Syria, Erdogan used the following words: “We also discussed the steps that can be taken against the terrorist organizations stationed in Syria. We also agreed on the decision to give the necessary responses to our fight against these groups of criminals who threaten the territorial integrity of Syria and who attack our soldiers, police, security forces and civilians as well our Syrian brethren.

We are witnessing the positive reflections of our dialogue with Russia in the Caucasus, Syria and in Ukraine.”

Erdogan also spoke on the issue of the new grain corridor in the Black Sea and made the following statements: “The initiatives to export Ukrainian grain through the Black Sea is the latest global example of this. What is important now is the healthy implementation of the plan and the positive atmosphere that could be to be attributed to concrete steps towards the return to the negotiations in Istanbul.”

When asked about the Akkuyu Nuclear Power Plant, a joint Turkish-Russian project, Erdogan replied: “Of course, it is not possible not to discuss such an issue. Akkuyu Nuclear Power Plant has a special importance in our country’s energy strategy. Our goal of commissioning Akkuyu’s first reactor in 2023 continues. We have once again discussed these issues in our discussions with the Russian side. Things like ‘25,000 people have stopped working right now. This place has been closed’ were being rumored. I did not accept such a thing, and neither does the Russian side. I will follow the works in Akkuyu on the spot, together with our delegation.

After that, I will tell Mr. Putin about the current situation there. And I will offer him to determine our road map according to him. They certainly do not accept stopping the process, that is for sure.”

Erdogan evaluated the attacks organized by the US-backed PKK terrorist organization in the north of Iraq to pit Türkiye and Iraq against each other with the following statements;

“Both the Ministry of Foreign Affairs and the Ministry of Defense have made statements before. What occurred is a different version of the well-known attacks of the terrorist organization PKK. Just as they have done such things up to this day, they have now thrown the ball on the Turkish Armed Forces and Türkiye immediately after carrying out such assassinations, as they did the same way previously. That is the truth of this matter. We stand by our statements that we made so far. Of course, our Directorate of Communication has also told this to different countries of Europe, especially to America, and the process continues in this way. From the first moment, we told them that we could help with everything by talking, negotiating and contacting our local interlocutors there, and that we would do our best to investigate this incident. This offer of ours is still in. We even expressed to them that we could provide them with medical support if they wished, about the wounded there. Not only in Northern Iraq or other parts of Iraq, but we said that we could take it to our country from there and do it in our hospitals, training and research hospitals in the nearest provinces, surgeries or care. We conveyed our condolences to all our interlocutors (…) After the incident in Zakho, there was an attack on our Consulate Building in Mosul. This attack took place on a civilian target. Everyone needs to see who can attack the civilian targets and who can do such infamy.”

A report by the pro-government Türkiye newspaper on the possibility of a meeting with the President Erdogan and his Syrian counterpart, Bashar al-Assad, dropped like a bombshell.

The details of the news, reported by Yilmaz Bilgen, are as follows; “In the Tehran and Sochi talks, important decisions were taken that will be reflected on Syria. Türkiye and Russia have, together with Iran and the Assad regime, have offered joint action against the PKK network in the east of the country. It is stated that an unknown Gulf country and another Muslim country in Africa are conducting diplomatic traffic with the two sides for the Erdogan-Assad meeting. It is noted that the Erdogan-Assad meeting, which Ankara says is “too early,” could also take place as a phone conversation.

Another development on the Turkish and Syrian relations was that the administrations from both countries regarding the civilian negotiation traffic have moved to the stage of establishing a commission of experts who know the region very well. Samir Hafez, a Syrian intellectual-politician and former Turkmen Assembly Speaker, stated that the Ankara-Damascus tension has caused losses not only to Syria and Türkiye but also to the entire Islamic world, and added, “This Ankara-Damascus rivalry epigraph, which was opened 12 years ago, should be closed urgently.”

Emphasizing that the production of consumer goods such as bread, water, fuel and job opportunities in Syria have decreased to nothing, Hafez said: “The current situation has exhausted both Syrians and the Turkish people greatly. The winners of this mess were Iran, Israel and the PKK. Safe areas in Syria should be restored and the dignified lives of our people in their countries should be saved at once.”

In the rest of the news, the following evaluations were included; “In Türkiye’s talks with Iran and especially Russia, the return of refugees was among the most important topics. Türkiye wants an extension in the scope of the amnesty laws announced by the Assad regime, so far to be carried out under international supervision and supervision, and demands steps to be taken on issues such as the release of political-opposition prisoners, the cancellation of the lists of criminals of tens of thousands of people, the updating and return of the home, land and workplace deeds of the Syrians who have left the country, and the restoration of their previous rights, including civil service.“

Ongoing tensions between Türkiye and Greece

The tensions between Türkiye and Greece, which broke out due to the provocations of the Athens administration, are still ongoing.

Turkish Minister of Foreign Affairs, Mevlut Cavusoglu has made the following statements in the 13th Summit of Ambassadors:

“We continue our Eastern Mediterranean policy without making concessions in accordance with the international law and the principle of equal rights. In the Aegean, we want the problems related to each other to be handled in a holistic manner and to be resolved comprehensively, permanently and in accordance with the international law. However, Greece cannot find the will to solve these problems in question. They do not give up from their typical behavior. We have already explained to our interlocutors, especially the UN, that these Islands which have non-military status according to international agreements, were militarized let alone the coasts. We will continue to address this critical issue in terms of the national security of our country.”

Speaking at the same conference, Minister of National Defense Hulusi Akar made some statements about Greece’s provocations.

Stating that Turkey is in favor of solving these problems through dialogue and diplomacy, but they have not received the necessary response from Greece on this issue, Minister Akar stated that there are many false reports against Turkey in the Greek media, “They have shown the photos and videos from our military exercises years ago and show them on Greek newspapers and television. Calling it ‘The Turks are preparing for the offensive’. There is no such thing. Let me take you to the Foça Naval Base. Everybody is on his or her regular schedule there. There is such an insistence, consciously or unconsciously, and these instances need to be broken.”