Tensions in the South Caucasus may lead to a new war 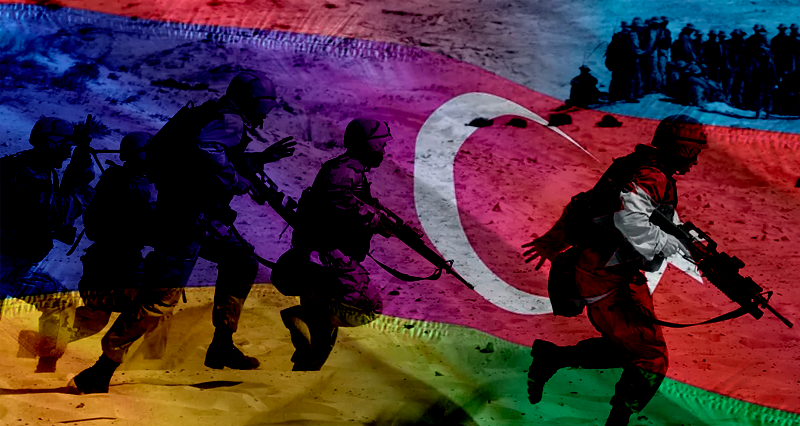 There is tension again on the Armenian-Azerbaijani state border. After the agreement of November 10, 2020, for the first time, military operations on this scale were carried out in the region, the Azerbaijani army flew attack drones again, and a significant number of personnel and military equipment of the Armenian side were destroyed. What was the reason?

In fact, this tension has military and political implications. First, let’s approach the issue from the military side.

The reason why the Azerbaijani army launched the anti-terrorist operations called “Revenge” was provocation by the Armenian side. Illegal Armenian armed forces in the region, where the Russian peacekeeping forces are temporarily stationed, opened fire on the Azerbaijani military positions in the Lachin region and killed 1 Azerbaijani soldier. The killing of 18-year-old soldier Anar Kazimov caused sharp protests in the Azerbaijani society, and revenge was inevitable.

The Azerbaijani army immediately started anti-terrorist operations and launched aerial attack operations against illegal Armenian armed groups operating in Karabakh. In a short period of time, about 10 Armenians were killed, 20 Armenian soldiers were injured, a large number of military equipment was destroyed, and the military base belonging to terrorists was destroyed. The fact that “revenge” operations lasted for one day reveals their purpose of warning. That is, the Azerbaijani side could have continued operations, but it did not. With this, official Baku took the revenge of its soldier and gave another serious warning to Armenia.

What does Azerbaijan want?

What is this warning about?! What messages are sent to Armenia with this? As we mentioned earlier, this tension in Karabakh also has political reasons. The Azerbaijani side clearly states that the conditions of the agreements dated November 10, 2020 and January 11, 2021 are not being fulfilled by Armenia, which seriously hinders the establishment of lasting peace in this region.

In the tripartite agreement of November 10, it is clearly stated that in parallel with the deployment of Russian peacekeeping forces in Karabakh, all Armenian armed groups in the region will be removed from the territory. However, the provocations and attacks on Azerbaijani military positions in the region during the last 2 years show once again that Armenia still does not comply with this condition, armed Armenians remain in the region. The Armenian side, the Armenian government claims that the armed Armenians in the region do not belong to the Armenian army, but are the self-defense forces of the so-called Nagorno-Karabakh. Therefore, the Armenian side confirms that the issue is an internal affair of Azerbaijan. That is, Azerbaijan has the right to carry out anti-terrorist operations against illegal armed groups existing in its territory. And official Baku does it.

Russia also has a responsibility to achieve peace

The interesting thing is that illegal Armenian militants operate in the territories under the control of Russian peacekeeping forces, and the Russian side turns a blind eye to this. Although the official Moscow was informed about this several times, the result did not change. This time, the Azerbaijani army took action.

Another reason for the “Revenge” anti-terrorist operation is related to the Zangazur corridor. Thus, the Armenian side does not want to take any serious steps regarding this corridor, which is one of the main provisions of the November 10 agreement, and tries to violate the agreement by making unique subjective comments about the Zangazur corridor.

The Zangazur Corridor, which will connect the western region of Azerbaijan with the Nakhichevan Autonomous Republic, must pass through the territory of Armenia, and official Yerevan must fulfill all its obligations in this regard.

Zangazur corridor is vital for Azerbaijan. It is through this corridor that Azerbaijani citizens will be able to come and go to Nakhichevan by land. In addition, cargo transportation, energy supply and other transportation processes will take place through this corridor to Nakhichevan.
This corridor is of great importance not only for Azerbaijan, but also for Turkey and the Turkic world. If we approach the issue from a broad scale, the realization of the Zangazur corridor, which can be considered the most profitable economic route from China to Europe, can change the geopolitical landscape not only of the region, but also of the world. In this regard, official Baku is trying to put pressure on Armenia until the end so that official Yerevan fulfills its obligations.

Time to hand over the city of Lachin and the corridor

Another issue causing tension between Yerevan and Baku is related to the Lachin corridor. Armenians coming from Armenia to Karabakh use this corridor and it is currently under the control of Russian peacekeeping forces. Still, according to the agreement of November 10, 2020, Armenians can comfortably use the Lachin corridor until an alternative road is constructed. Today, an alternative road is ready, and Azerbaijan has built it. Now the Armenians should leave the city of Lachin and the corridor should come under the control of the Azerbaijani army. No matter how much Armenia tries to violate the conditions, it must fulfill this obligation, and the Russian side is considered one of the responsible parties in this matter.

The biggest problem waiting to be resolved between the parties is that the final peace agreement has not yet been signed. The peace agreement put forward by Azerbaijan was not accepted by Armenia. That is, the Armenian side refuses to sign a peace treaty based on the principles of territorial integrity and inviolability of borders of Azerbaijan. In such a case, should Azerbaijan unilaterally recognize the territorial integrity of Armenia?! It’s an interesting question. If Armenia does not recognize it, why should Azerbaijan?

With this logic, Azerbaijan can claim the territory of the Republic of Armenia at any time and conduct military operations on the territory of Armenia. But official Baku doesn’t. Because Azerbaijan’s only desire is to protect its territories. The people of Azerbaijan, who do not claim the land of any country, fight only for their territories. It is Azerbaijan’s sovereign right to protect its territory and fight against illegal terrorist groups rooted in its territory within the framework of borders adopted by the UN.
Considering these arguments, it is appropriate to assess the situation in Karabakh. If Armenia does not fulfill its obligations and continues to threaten Azerbaijan’s borders, official Baku will have no choice but to launch new anti-terrorist operations. Continuous military operations can lead to the third Karabakh war.

Learning from the bitter consequences of 2020 may be more useful for Armenia. Because, against the background of today’s reality in the world, no one will believe the false propaganda of Armenia and the official Yerevan will be left alone. Today, in addition to successfully continuing the alliance relations with Turkiye and Russia, Azerbaijan acts as a reliable energy provider for Europe. The Azerbaijani army, which left the 44-day war with victory, is stronger and more professional today. Therefore, the next war will not last for 44 days, but for 44 hours, and the tricolor flag of Azerbaijan will fly in Khojaly and Khankendi.

It is in the hands of Armenia to do this without war and to contribute to the peace process.