Are the Russians approaching the ‘warm waters’? 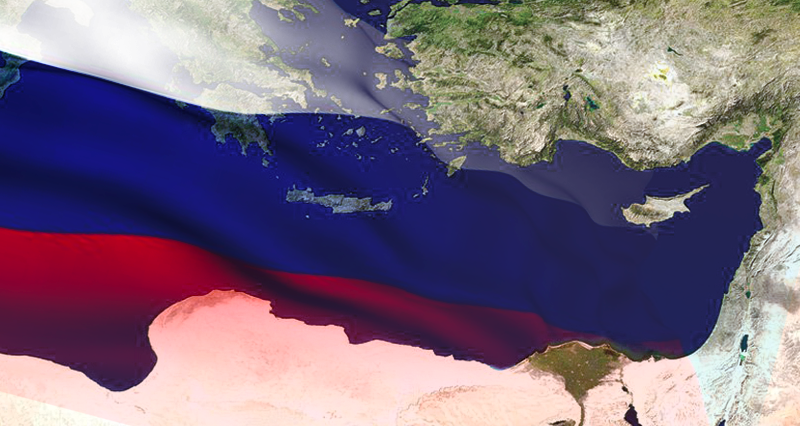 At present, pessimistic approaches base themselves on the hearsay that “Russia will land in the warm waters” in order to reject Turkish-Russian friendly relations in Syria, Libya and the eastern Mediterranean.

In fact, the question of accessing the “warm waters” goes back to Russia’s search for a ‘non-freezing harbor’, which started as early as the 18th century. At that time, Russia was geographically stuck between the glacier-covered seas in the north and the Ottoman Empire with the Bosporus and the Black Sea in the south. As Russian ports in the Baltic and Vladivostok froze in winter, maritime trade could not flourish and the naval force necessary to become a global power could not be built up. The axis of the struggle not only with the Ottomans, but also with Sweden and Germany in the west, Japan in the east, and Britain via Pakistan, India and Iran in the south for nearly 300 years was based on the search for ‘non-freezing harbor’.

But this major problem for Russia was solved step by step, first with the establishment of the ‘thin navy’, next with the Crimean War of 1856 and the establishment of dominance in the Black Sea, and then with the melting of the glaciers year by year along with the development of nuclear-propelled ships in the following years. Today, with 18 nuclear icebreakers and nuclear-propelled warships, Russia has the capability to fly the flag in every sea in the world. The Admiral Kuznetsov aircraft carrier and the stealth aircraft they will soon deploy on it are the greatest force multiplier of this force. Russia currently has over 100 ships operating in the oceans.

Russia has long since settled in the Mediterranean

In this period, we see that the Russian Navy, which frequently confronted the US 6th Fleet in addition to its regular activities in the Mediterranean, caused a lot of concern in Washington and was reported hour by hour by the CIA.

Reconstruction of the 5th fleet

After the collapse of the Soviet Union, the 5th Fleet of the Russian Navy was deactivated on December 31, 1992 due to the downsizing of the Russian Armed Forces. In that process, all ports except Syria/Tartus were evacuated and regular rotations were terminated. Almost all naval power in the Mediterranean was terminated. After a long struggle to regain its footing, Russia’s return to the Mediterranean Sea took place in 2013.

With Moscow’s decision to intervene in the Syrian conflict, the Russian Defense Ministry re-established the 5th Fleet in the Mediterranean based on a combination of ships from the Black Sea Fleet and the Northern Fleet deployed to Syria in September 2013. As of June 2017, this Fleet consisted of 15 warships and auxiliary vessels. In June 2019, the Syrian Parliament approved a 49-year rent of the Port of Tartus to Russia. Expansion of the base quickly followed. Vladimir Putin, who asked Syria for additional naval space last year, plans to expand Tartus to accommodate all platforms in the future.

Search for a base in Africa

With Russia’s return to the Mediterranean, the search for bases in different countries has begun again. Having settled in Sirte during the war in Libya, Russian forces want to legitimize their presence there during the process of political settlement. In addition, negotiations are being held to reactivate the bases established during the Soviet era. Russia, which has signed military cooperation agreements with 21 African countries since 2015, is known to have received assurances from the Central African Republic, Egypt, Eritrea, Madagascar, Mozambique and Sudan to establish military bases. Russian naval bases, to be established especially in countries such as Egypt, Eritrea, Libya, Tunisia or Algeria, are considered to have a strategic impact. Having expanded its military bases in foreign countries to 700,000 square kilometers, Russia currently has peacekeepers in South Sudan, Lebanon, Congo, Liberia, Ivory Coast, Haiti and Morocco.

Reinforcement for the Mediterranean fleet

At the same time, the Russian Navy has made a serious build-up of the Mediterranean Fleet in recent years. Before the Ukraine war, the Black Sea fleet was increased to 50 ships to participate in missions in the Mediterranean. A budget of 2.5 billion dollars was allocated to this fleet for the next 5 years. Two Kilo-class submarines were also sent to the Mediterranean. NATO calls these submarines ‘black holes’, because they are the quietest in the world.

Russia’s landing in the Mediterranean has positive rather than threatening consequences for Türkiye. Especially in the Eastern Mediterranean, there are seven different cooperation mechanisms, including trilateral, quadrilateral and quadrilateral, established against Türkiye. Greece and the Greek populated Southern Part of Cyprus, backed by the US and the EU, continue their piracy attempts by creating de facto situations in Turkish sovereignty areas. Against this front, the presence of the Russian Navy in the region as a balancing nuclear power suppresses the arrogance of the US and the countries under its control. The Russians, who have repeatedly warned the Greek Cypriot Administration and reacted to the US-French buildup in Cyprus, have been taking a clear stance by conducting missile tests and drills in the region especially in recent years. It is well known that British ships, which had previously come to strike Syria, were also intercepted by Russian submarines and forced to turn back.

The Russians, who have also established a layered air defense with their ships in Tartus, aircraft in Khmeimim and air defense systems, protect Syrian airspace with the A2AD (anti-access-area denial) strategy.

Furthermore, it is expected that Russia and Türkiye may conduct joint hydrocarbon activities in the Mediterranean in the following period.

The move that will shift the strategic balance in the Eastern Mediterranean will be the recognition of Turkish Republic of Northern Cyprus by Russia. The landing of a passenger plane from Moscow at Ercan/TRNC will shake things up. Having landed in the Mediterranean 70 years ago, the Russians now have the potential to change the balance in the region in favor of Türkiye. Realizing this potential, cementing strategic friendship and eliminating distrust is much easier than one might think. The cooperation of two powerful navies is a candidate to become the US’s nightmare. So long as we don’t let the opportunities slip away.