The new Russian Naval Doctrine’s emphasis on the Eastern Mediterranean: An opportunity for Türkiye to break through the US containment 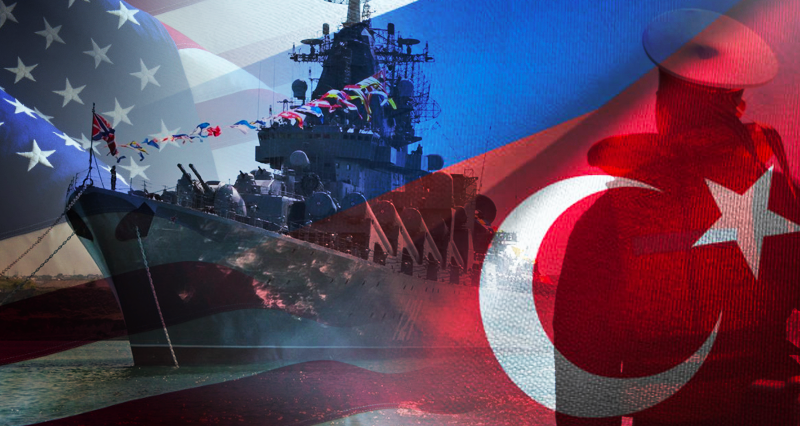 The Eastern Mediterranean Basin was included in the new Russian Naval Doctrine approved recently. The area is considered for the first time as a “region that would significantly affect the country’s economic development, national prosperity and security”. And the growing Russian interest in the Eastern Mediterranean creates some important opportunities for Türkiye and the Turkish Republic of Northern Cyprus (TRNC).

Russia has announced its national interests and benefits over the seas and oceans of the world, with a new 55-page Naval Doctrine. Two new documents were approved during a ceremony held at the St. Petersburg State History Museum on the Russian Navy Day. The new Naval Doctrine and Naval Charters, signed by Russian President Vladimir Putin, have redefined the primary objectives, areas of interest and all the internal charters of the Russian Navy.

Saying that they have clearly defined the limits of Russian national interests in his speech, Putin added, “We will ensure the protection of these regions by all means”. Stressing that the Russian Navy has continuously improved its capabilities in recent years, Putin stated, “Our fleet is capable of responding to any force that decides to put a shadow our sovereignty and freedom, with a lightning speed”.

The primary threats are the USA and its allies

This new doctrine defined that the real threat are “the United States of America and its allies”, whereas in the previous Naval Doctrine announced by Russia in 2015, the primary external threat had been the NATO expansion towards Russia. Greece is also included among the countries that are not friendly towards Russia. In the document, “The desire of the United States and its allies to obstruct Russia’s rights and interests over the World Ocean and their related maritime claims” were described as the primary threats. In addition, “attempts by several nations to change the existing legal regimes of the maritime areas and straits used for international navigation in order to achieve their own geopolitical goals” were also included to the list of these threats.

The doctrine drew up a long line of maritime transport from the Kuril Islands, to the Baltic straits and the Black Sea, and from the Eastern Mediterranean to the coasts of Asia and Africa, as Russia’s lines of national security. It was also declared that the maritime cooperation with the allies in the Arctic, Asia-Pacific, the Caspian and Indian Ocean would be increased. Article 15 of the document states:

1) Territorial waters of the oceans and seas adjacent to the coasts of the Russian Federation, including the Azov Sea and the Black Sea;

3) The Black Sea, the Baltic Sea and the Straits of Kuril Islands;

4) The areas through which world maritime shipping transits through, including those along the coasts of Asia and Africa.”

An important opportunity for the TRNC

The Russian decisions to re-establish the 5th Fleet and to expand the Port of Tartus especially after 2015, had a great impact in adding the Eastern Mediterranean to its areas of interest. When asked about the possible impacts of this situation on Türkiye and the TRNC, Retired Rear Admiral Deniz Kutluk has made the following evaluations:

The Ercan International Airport, which is currently under the control of the TRNC, is ready for the Russian use. We have to first encourage this. Russians can also use the seaports of the TRNC, and we also have to encourage that. The banking system can also be eased up. Thus, the banking sector in the Greek Cypriot Administration can actually shift towards the North. It can be eased up for the Russian citizens to buy real estate in the North. They already have heavily invested in the South. The sanctions imposed due to the war in Ukraine, are now putting a strain between Russia and Greece/the Greek Cypriot Administration. And we can take an advantage of this situation.”

Things to know about the Russian Naval Doctrine

1. Where does the Russian national interests stretch to?

The naval doctrine states that the Russian national interests stretches “to all of the World Ocean including the Caspian Sea as major naval power”. And Moscow declares that it will defend its interests based on “the universally accepted principles and norms of international law”, and also by taking the interests of other nations into account.

2. What is the main threat for Russia?

The document outlines the numerous “challenges and threats” Russia faces in the oceans, largely related to the activities of the United States and its allies. However the doctrine highly stresses on “the strategic course of the US on domination of the World Ocean” and the “encirclement of the NATO military infrastructure on its own national borders.”

3. What about overseas bases?

The document recognizes the lack of overseas bases and supply ports, which are crucial for expanding the operational range of the Russian Navy. However, the doctrine also foresees the establishment of such a facility in the Red Sea.

The doctrine includes plans to build a new dockyard in the Eastern Russia. It is also stated that this dockyard will be used to build ships suitable for the “development of the Arctic Ocean”, as well as building “large-capacity ships”, including “modern aircraft carriers for the navy”.

5. Is the Arctic on the focus?

The doctrine dedicates a special place for the Arctic region. The document foresees the developing of the military capabilities in the region, exploiting the natural resources on the high seas, and making the Arctic Sea Route a safe, year-round and a globally competitive Russian shipping route.