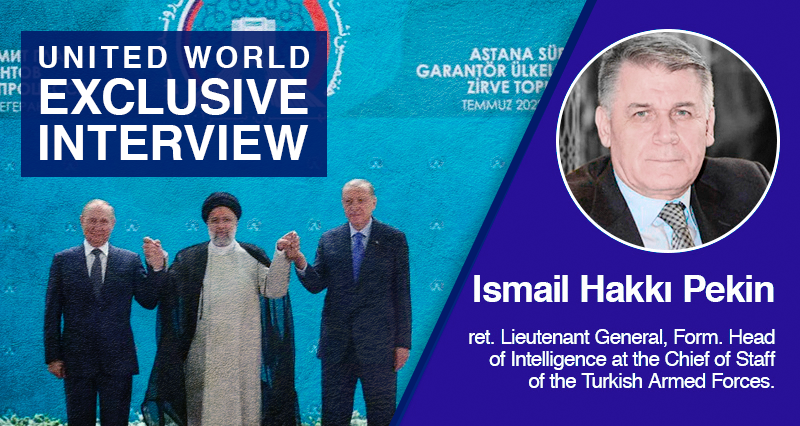 The Turkish government is repeatedly stating its will to pursue another military opeation in the north of Syria. Ankara has also brought up the topic on the recent meeting of the Astana trio in Tehran in meetings with Iranian and Russian counterparts.

We interviewed Ismail Hakkı Pekin, retired Lieutenant-General of the Turkish Armed Forces and former Head of Military Intelligence at the Chief of Staff, on regional dynamics and constellations concerning the Syrian Arab Republic.

The Tehran Summit brought together the heads of state of Iran, Türkiye and Russia. How do you evaluate the summit? There were many comments that the countries had a lot of disagreements, especially between Türkiye and the other two countries. In particular, it was said that the other countries were not in favor of the operation that Türkiye was planning to carry out.

The answer to this question depends on what is expected from the Tehran Summit.  When we look at the circumstances under which the Summit was held, the following events stand out: The Russian-Ukrainian war is going on. There is the grain problem in Ukraine.  After the Summit, there has been an attack in Zakho and Türkiye was blamed, and then there were attacks including in Mosul. This Summit was held in a challenging period.

The Astana Summit was established as a platform between Türkiye, Iran and Russia to find a solution in the Syrian war. With this meeting, the three countries intended to reactivate the Astana Summit. As you may recall, there were criticisms that Astana had lost its function. Meeting at the presidential level can be considered as a response to those criticisms.

As for the disagreements between the countries, the three countries do not necessarily agree on all issues. At the Summit, everyone put forward their own concerns.

Viewing the matter from the perspective of Iran, Iran does not welcome Türkiye’s presence in certain regions. Iran has a line, the “line of resistance”: a line that starts in Tehran, stretches through Iraq, Syria and then through Lebanon to Hamas in Gaza. For Iran to hold this line, Syrian leader Bashar al-Assad must remain in power. This is also what Russia wants. The Syrian government currently has control over approximately 55-60% of the Syrian territory. Russia and Iran do not favour the change in this situation. Tel Rifaat is among the areas where Türkiye plans to launch an operation. Tel Rifaat is strategically important. It is very close to Aleppo.  Aleppo is a main center connecting the east, west and south of the country. Aleppo is a crucial region with a very large population. Türkiye itself makes statements that raise suspicion from time to time.

From Russia’s point of view, it is of primary importance that there are no moves in the region that would undermine Syria’s territorial integrity. Secondly, Russia is being cautious to avoid escalation of tensions and conflicts in the region. Russia does not like to see its obligations in the region increase while at war in Ukraine, because in that case Russia might have to send some additional forces to the region.

The problems are centered on Türkiye-Syria relations. The Turkish government is still unwilling to come to an agreement with the Syrian government. One of the reasons for this is the Syrian National Army, also known as the Free Syrian Army, which Türkiye supports. This army is seen by Iran, Russia and Syria as terrorists. This is a serious point of disagreement and the four countries need to come to an agreement on this.

If the Syrian problem is to be solved, Syria must be part of the deal and part of the political equations. The opposite scenario is not tenable. Destroying Syria’s territorial integrity and the current Syrian government cannot achieve a solution to the problem.  On the contrary, it would put the region in an insurmountable situation. If so, there will be a massive migration to Türkiye.

Given the fact that these obstacles remain, it is quite understandable that no definitive agreement came out of the Tehran Summit. Nothing more could have been achieved. At the Summit, Türkiye once again conveyed its concerns to Russia and Iran. Obviously, Türkiye needs to be very careful about the equilibrium and dynamics in the region, and Türkiye has already been doing so.

Astana is a great opportunity for the region

The negative reviews and propaganda on the Tehran Summit, and the sayings like “the countries could not agree on this and that issues” are basically not accurate. Everything has its time.

The problems we mentioned are not ones that can be resolved in a single meeting. The Tehran Summit is a step, a huge one. The point is that these steps should be continued. The Astana platform is a great opportunity for the region.

The strong emphasis of the Tehran Summit: the US must leave the region

An important stance rose from this Summit was to emphasize that the US should get out of the region. In other words, the question is the US withdrawal from the east of the Euphrates. The US wants to prolong the war in the region. Why? Simply because it pushes Russia, Türkiye and Iran into this region. The US and Britain are also using Hayat Tahrir al-Sham as a tool in Idlib. Given the aims of the US, we can say that difficulties await Türkiye.

So how can Türkiye overcome the difficulties? By joint meetings and negotiations of Türkiye, Iran and Russia, Syria’s inclusion in the talks and reaching a common understanding. The Tehran Summit at least kept that commitment in place.

Türkiye has been saying: “I will establish a safe zone along the Syrian border, and let’s settle at least 1 million refugees in that zone. So that terrorist organizations do not infiltrate my country.” To achieve this goal, Türkiye is trying to isolate the US in the region. For that, terrorist groups need to be pushed further south, towards Raqqa and Hasakah. Türkiye would also seek to control Syria’s main supply and trade line, which runs through Ayn al-Isaa, with one branch to the Mediterranean Sea via Aleppo and the other to Damascus via Homs.

Considering the outcomes of the Summit, do you think it is likely that Türkiye will carry out an operation in the near future?

After that, Türkiye may carry out some operations in the region. In fact, Türkiye is already conducting some operations. Both in Iraq and Syria. In Syria, Operation Claw continues and in Iraq, Türkiye has many bases. There are some gaps in the safe zone Türkiye is trying to establish, but Türkiye is in a strong position to take control of these areas. The National Intelligence Organization conducts operations in the depths of neighboring countries. These are called “surgical operations”. Very important pin-point operations are carried out against the YPG both in Iraq and Syria. These are precisely planned operations. The Turkish Armed Forces also restrict the mobility of terrorist organizations and ensure security to prevent infiltration from the region.

Such operations may not enable Türkiye to fully establish the “safe zone”, but can help Türkiye to maintain security in that area. This is what Türkiye is currently doing. Apart from these, Türkiye can also conduct limited operations. When it goes beyond these “limited operations”, in other words, when operations are carried out with larger units, Iran, Russia and other Arab countries, especially Syria, are likely to take a stance against Türkiye. As I said, Türkiye is also paying attention to this fragile balance.

The main problem for Türkiye is east of the Euphrates. The US is attempting to establish a garrison state in this region. The US insists that the YPG organization in the region is against ISIS. “If I don’t train and arm the YPG, ISIS will take over here,” the US says. In response, Türkiye says that Türkiye is the one fighting ISIS and contrary to what US claims, ISIS is not the major threat. Russia is also fighting against ISIS. Türkiye can conduct operations against both ISIS and YPG in agreement with Russia.

Türkiye is waging a very important fight against terrorism. Türkiye’s struggle is vital both for itself and for other countries. Moreover, Türkiye is fighting both at home and abroad. Türkiye is working to cut the external links of terrorism. Namely the US and some other Western countries. Türkiye puts great pressure on the US and countries like Sweden and Finland. As long as the external support and funding of terrorism is not eliminated, we have to continue the fight against terrorism. They are doing the same thing to Russia. They send weapons to Ukraine and then Russia is being forced to fight. I mean, this problem applies to both Türkiye and Russia. For example, many Western countries propagandized the YPG as “freedom fighters”.

And let’s pay attention to another point. Russia does not want to lose the Kurds to the US. Russia asks them “Let’s find a solution based on Syria’s territorial integrity”. There are tribes that Russia seeks to influence. Türkiye also tried this, but failed in the end. In addition to the operations to be carried out in the region, it is also necessary to gain the local people.