Ukrainian military tactics and the struggle over public opinion 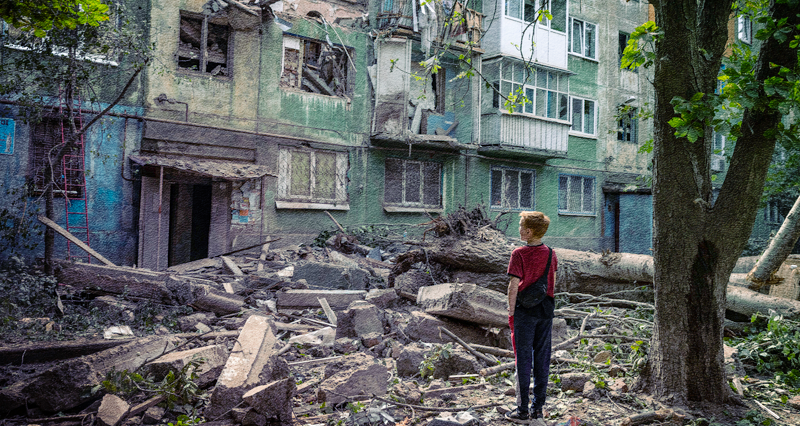 The tides of Western public moral evaluation towards the Ukrainian crisis are changing day by day. A report by Amnesty International, Western NGO, published on August, has caused an outcry.

The NGO declared that between April and July, its researchers spent weeks investigating sites of Russian air strikes. The report states:

“Throughout these investigations, researchers found evidence of Ukrainian forces launching strikes from within populated residential areas as well as basing themselves in civilian buildings in 19 towns and villages in the regions. (…)

Most residential areas where soldiers located themselves were kilometers away from front lines. Viable alternatives were available that would not endanger civilians – such as military bases or densely wooded areas nearby, or other structures further away from residential areas. (…)

Amnesty International researchers witnessed Ukrainian forces using hospitals as de facto military bases in five locations. In two towns, dozens of soldiers were resting, milling about, and eating meals in hospitals. In another town, soldiers were firing from near the hospital. (…)

The Ukrainian military has routinely set up bases in schools in towns and villages in Donbas and in the Mykolaiv area. Schools have been temporarily closed to students since the conflict began, but in most cases the buildings were located close to populated civilian neighborhoods.”

Amnesty is aware of its function to create moral evaluation on the Ukraine crisis in the minds of the Western public. The NGO therefore hurries to state “The Ukrainian military’s practice of locating military objectives within populated areas does not in any way justify indiscriminate Russian attacks.”

Still, the fact that a Western NGO has documented Ukrainian army’s careless stance towards its own population, including positioning itself within hospitals – remember that a Russian attack on the hospital in Mariupol was used as an indication of inhuman approaches, has caused great debate.

The Ukrainian President did not respond to the factual accusations towards the Ukrainian military, but took the issue to the level of a moral debate. Zelensky stated:

“There cannot be — even hypothetically — any condition under which any Russian attack on Ukraine becomes justified. Aggression against our state is unprovoked, invasive and openly terroristic. If someone makes a report in which the victim and the aggressor are allegedly the same in something, if some data about the victim is analyzed and what the aggressor was doing at that time is ignored, this cannot be tolerated.”

Oxana Pokalchuk, the Head of Amnesty’s Ukraine section, who criticized the report and resigned from her post, supported Zelensky. In her Facebook account, Pokalchuk claimed “As a result, without intending to the organization has published material that sounds like support for the Russian narrative.”

“There is no room for differentiation in the emotionally charged atmosphere surrounding the war in Ukraine. A seasoned human rights organization like AI should know this. It should be able to anticipate how its reports will be received by the public. And it should be able to publish its findings in such a way that they do not enable a perpetrator-victim reversal in Moscow and provoke outrage in Kyiv.”

“Throw the report out of the window”

And the Russian Novaya Gazeta Europa provides a clear indication of its understanding of press freedom and truthful reporting:

“If such a report were submitted as an article to any self-respecting publication, the editor would throw it out of the window and dismiss the correspondent.”

None of these doubts or questions whether the reported facts are true or not. They are fully concerned about the effects on public support for Ukraine the report can have.

But others reacted differently, criticizing the Ukrainian army for its tactics.

The newspaper Denik from the Czech Republic argued:

“However if Ukraine goes against the law and puts the public in unnecessary danger, its actions may be understandable tactically but they are not excusable. … Both the West and Ukraine’s leadership should take Amnesty’s report seriously and draw consequences. No one can demand that Ukraine fight brutal invaders with kid gloves. But it must not deliberately hold civilians hostage.”

Writing in the Romanian Libertatea, Martin Gherman, who was brought up in Ukraine, states:

“For the Ukrainian state, criticism often means not just disagreeing but also being the enemy. … There have been a good deal of emotional, unreasoned reactions by Kyiv to various accusations or even minor comments from outside in the past. Council of Europe reports are a case in point: All of the resolutions passed by this international organisation, which suggested amendments to the country’s education act or other regulations concerning minority rights, were either sharply criticised by Kyiv or simply ignored.”

“An executioner’s axe for the Kyiv narrative”

“The Ukrainian resistance is not a holy, pristine struggle, as it has been portrayed for months by almost the entire international community. … This report constitutes an executioner’s axe for the Kyiv narrative, which has always portrayed Russian generals as calculating sadists who attack public buildings only to sow panic among the civilian population and claim as many victims as they can. … It would be foolish to describe Amnesty as pro-Russian or, as all manners of conspiracy theorists like to say, as ‘subservient to the strong powers’, even though more than a few will try to do just that.”

Days later, on August 7, Amnesty International reacted with a public statement. The NGO firstly “regretted the distress and anger that our press release on the Ukrainian military’s fighting tactics has caused”– placing the “distress and anger” suffered by the civilians due to these tactics in a secondary place.

The NGO tried to limit the damage by again and again stating that Russia was responsible for the crisis, the NGO would not say “that the Ukrainian military is not taking adequate precautions elsewhere in the country”, that “Amnesty International is not attempting to give the Ukrainian military detailed instructions regarding how they should operate”, that AI “challenged the world to demonstrate its solidarity with Ukrainians through concrete action, and we will continue to do so”.

Despite the allegiance to the general line, the organization insisted on the accuracy of its local findings.

But the damage was done – and deepened even further.

The German daily newspaper Die Welt picks up the story about the Ukrainian President’s offshore bank accounts as revealed in the Pandora Papers – and a documentary investigating the issue being prohibited for airing by the authorities in Kyiv.

The US news network reports that refugees flow – from the Ukrainian side to the Russian-controlled territories.

Another US TV network, CBS, has aired a documentary that claims on citing experts that only 30% of arms delivered to Ukraine make it to the frontline. The documentary also criticized the corruption and bureaucracy in Ukraine around arms deliveries.

The Ukrainian government protested and CBS news retracted the documentary. Ukrainian Foreign Minister commented “Welcome first step, but it is not enough.”

All this reporting did not prevent the White House from announcing a new arms delivery to Ukraine.

At the same time, in his press conference on August 8, US Secretary of State Blinken stated “And we hope to see, as the Ukrainian president has said, this resolved diplomatically over time”.

The military conflict within Ukraine is increasingly accompanied by a fight over the public opinion – even more so with a harsh winter coming to Europe.