The United States’ miscalculation in Taiwan 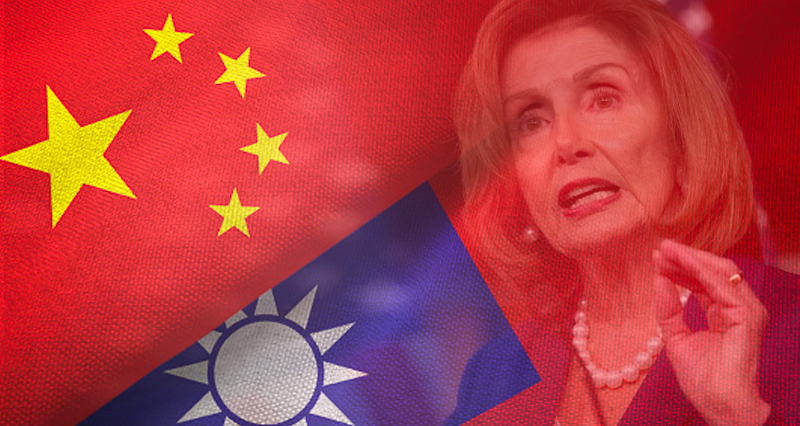 The US and China are once again engaged in conflict in the Pacific after Nancy Pelosi, the Speaker of the US House of Representatives, visited Taiwan. The problem is not just a provocation of the US playing the Taiwan card. If we take a comprehensive look, the only goal of the US in supporting the separatist movement in East Turkestan, the orange revolution attempt in Hong Kong in 2019, and in launching trade war strategies against China is to prevent China’s peaceful rise. Furthermore, the Regional Comprehensive Economic Partnership (RCEP), the largest free trade agreement in the world, which also includes US allies like Japan, South Korea, New Zealand, and Australia, was signed under China’s leadership and disrupted the US balance of power. Therefore, the United States, whose hegemony has been injured, develops a strategy to “fight against China” once again. Even as it develops its own defense doctrine in this direction, the USA is desperately trying to include NATO and the G7 nations in this “struggle.” And let’s not forget Joe Biden’s statement in 2020 after he was elected President of the United States in a shady election: “The main challenge in the 21st century will be between us and China.”

The historical roots of Taiwan’s problem

Taiwan, which the Chinese Communist Party (CCP) leaders refer to as “the last phase of the Century of Humiliation”, was invaded by the Netherlands and Spain in the 17th century. In modern times, Taiwan was occupied twice by Japanese imperialism in 1874 and 1895. Chiang Kai-shek, leader of the Chinese Nationalist Party (Kuomintang-KMT), fled to Taiwan, which had been liberated from Japanese occupation in 1945, after his party lost the civil war in 1949. Chiang Kai-shek brutally suppressed the revolt against the KMT in Taiwan, which the western media portrays as the “island of democracy,” and the country remained authoritarian and despotic for 25 years. Taiwan remained under martial law until 1987 following Chiang Kai-shek. The United Nations (UN) and the United States recognised the puppet government in Taiwan, with 13 million people, as the true representative of China until 1971, instead of the People’s Republic of China, which was founded in Beijing in 1949 with the world’s largest population (550 million at that time). In 1971, this irrational situation came to an end, and most of the world recognised the CCP-ruled People’s Republic of China as the true representative of China, and the Taiwan-based Republic of China was expelled from the UN. Accordingly, Taiwan was accepted as a part of China within the “One China Policy”.

Nevertheless, since the 1950s, there have been multiple cases related to the Taiwan Crisis. As a result of the US’s significant infrastructure investments in Taiwan, which the US sees as one of the major bases in its Pacific and China containment plans, Taiwan’s economy has witnessed a remarkable improvement. Over the Taiwan Strait, the US Army’s 7th Fleet has regularly sailed while shouting propaganda about “defending Taiwan from the CCP.” Over time, as more CIA personnel settled there, the area progressively transformed into a US base.

Compared to the Mao era, China’s foreign policy, which was reshaped with the “Reform and Opening Up” after 1978, was more passive in terms of international interactions, and it was about avoiding complex connections that prioritized and would jeopardize economic development. Also, Taiwan crossed some red lines in the 1990s as a result of growing neoliberal influence and stronger ties with the West. It should be noted that enterprises in Taiwan have gradually moved their manufacturing bases to the mainland as a result of this process of economic liberalisation.

Deng Xiaoping emphasized that Taiwan “might have its own army”, although he stressed that “it would not be entirely autonomous” in his 1983 speech, titled “An Idea for the Peaceful Reunification of the Chinese Mainland and Taiwan”, in the US. This led to a new expansion in US influence. Despite this, China was forced to reaffirm its red lines during the Third Taiwan Strait Crisis in 1996.

The Xi Jinping administration continues the strategy elaborated in 1993. Accordingly, in Taiwan, under the names of “Special Administrative Region”, “One Country-Two Systems”, such as Macau and Hong Kong, an administration is envisaged that seen within the inseparable integrity of China, once again. The main opposition in Taiwan, KMT, is a party that tends to merge with mainland China, unlike in the past.

Although the American puppet Democratic Progressive Party (DPP), which won the elections again in 2020, received 8 million 170 thousand 231 votes, the pro-unification KMT broke the voting record in the history of the party with 7 million 658 thousand 724 votes. Alongside the ongoing “orange coup” attempt in Hong Kong, on January 2, 2020, the helicopter carrying Taiwan’s top military official Shen Yi Ming and other senior soldiers crashed in a suspicious manner and killed them. It had an impact on the elections in Taiwan, resulting in a sharp pro-US victory.

Today, the US policy, which is gradually moving away from the “one-China policy,” is the main cause of China’s increasing reaction to Pelosi’s visit. US-backed provocations escalated following the local Taiwanese government’s reelection as an American collaborator. What happened in the recent past can be summed up as follows:

USA is the real cause of the problems

Taiwan is currently one of the top investors in China. Over the past 30 years, Taiwan has been authorised to spend 193.51 billion dollars in China. Each year, the trade between Taiwan and the People’s Republic of China is close to $200 billion. Taiwan’s economy is heavily dependent on the mainland.

In a survey conducted in June 2022, only 5.2% of Taiwanese respondents said that they supported Taiwan’s political separation from China and establishing an independent state. We would not be discussing the Taiwan issue in the world today if American imperialist policies were not exist. Only 13 nations have recognised Taiwan as an independent nation, while 157 still do not recognise Taiwan’s “independence.”

The failure of American imperialism to achieve its goals in Hong Kong and Xinjiang is demonstrated by the USA’s decision to play the Taiwan card once again. So far, China has fought to maintain its unitary structure under the CCP without hesitation. In the White Paper “The Taiwan Question and Reunification of China”, which was released in August 1993, the CCP maintains its policies. China states clearly in this policy document that it will use force to defend itself in the event of external interference. Following Pelosi’s visit, Beijing will conduct military drills close to Taiwan’s island to demonstrate its readiness for military action.

On the other hand, Beijing also considered the possible impact of a possible intervene in Pelosi’s plane, on the Taiwanese people, that could be comparable to the impacts of the military helicopter crash before the 2020 elections. Furthermore, it is evident from the USA’s escalating provocations that pro-unification candidates, not separatists, will probably prevail in Taiwan’s 2024 elections. The United States lacks the power to obstruct Taiwan’s peaceful reunification with China as a result of the failure of the futile QUAD-AUKUS alliance in the Pacific.