The Modernization and Localization of Scientific Socialism in the 21st Century 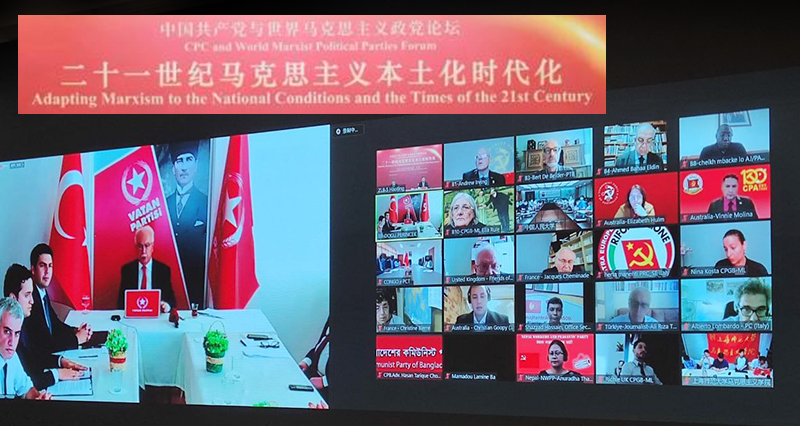 The Communist Party of China (CPC) has organized the World Symposium for Marxist Political Parties on July 28, 2022. The forum was hosted by the International Department of the CPC Central Committee. More than 300 representatives from over 100 Marxist political parties, left-wing political parties and political organizations in 70-plus countries attended online.

The Modernization and Localization of Scientific Socialism in the 21st Century

I salute the World Symposium for Marxist Political Parties.

The history of Scientific Socialism is actually a history of modernization and localization. We can summarize this history in three phases:

First phase: The 19th century, with a Europe and working class-centered theory and practice of revolution (Marx and Engels).

Second phase: The 20th century, with a worldly and global theory and practice of revolution, focused on the axis of oppressed nations (Lenin and Mao Zedong).

Third phase: The 21st Century, with a theory and practice of revolution that has a global scale and is humanity-focused, with states as its main force.

Scientific Socialism was born in the 19th Century in Europe. The other continents back then constituted the periphery of the revolutionary movement. Therefore, Marx and Engels’ theory of revolution was centered on Europe and focused on the working class. The Paris Commune of 1871 confirmed this theory. But the government of the working class lasted only three months.

In the era of foreign trade, capitalist countries have calmed their own national working classes using part of the profit they had obtained in international exploitation. In a sense, they have converted their own working classes to become a part of the bourgeois nation. Upon that, Marx and Engels have turned their eyes and look at the end of their life towards the East, especially Russia, Turkey and China.

With capitalism entering the phase of imperialism, the contradiction between the bourgeoisie and the proletariat became secondary. In the 20th Century, the epicenter of the revolution moved to the Oppressed World, especially to Asia. Under these circumstances, Lenin made the analysis of “Reactionary Europe and Progressive Asia”.

Russia was also essentially a country of peasants, and part of the Oppressed World. Consequently, the Soviet Revolution has always fought against imperialism from 1917 to 1945, and until the 1930s, it had the character of a national democratic revolution.

In the 20th Century, the revolution has modernized, localized and became earthly by escaping over the boundaries of Europe. Turkey’s national democratic revolution in the beginning of the 20th Century was followed by revolutions in other countries of Asia, Africa and Latin America.

The Chinese revolution led by Mao Zedong succeeded and survived, because it has progressed on the ground of the realities of those of China and those of our era.

In this process, the leadership of Lenin in Russia and Mao in China has shaped the praxis of Marxism becoming a modern, contemporary, localized and earthly ideology.

On the other side, after the 1950s, the Soviet Union and the countries under its dominance have gone through processes of returning to capitalism. Mao Zedong has examined this development, and he stated that, even after the collectivization of the means of production, the danger of a return to capitalism was continuing. The “capitalist roaders” in the state and party leadership led this return to capitalism. The theory of continuing the revolution during the construction of socialism was based upon this great experience.

The dissolution of the Soviet Union after 1990 has started a new period. The US imperialism began to follow the goal of eliminating statehood in the countries of the Oppressed and Developing World. The nation states’ resistance against globalization has become the new driving force for modernization and localization. The working classes also essentially have fought at the front of defending the nation state.

As it is well known, Lenin had demonstrated that the final tendency of imperialism was to eliminate statehood. That was due to the reason that the nation state was limiting imperialist exploitation with its army, its tariffs, and its dominance over the national market, its national currency, its state-owned-enterprises and its subsidies for agriculture etcetera. The United States’ strategy of globalization was essentially targeting to crush down these obstacles.

In regard to the economic dimension, Scientific Socialism has localized in our times within the struggle against the tribute system based on the reign of the Dollar. Every state has joined this struggle in so far as it has defended the national economy and the national monetary system.

The reign of the Dollar was established step by step after the Second World War, crushing down the system of the exchange of corresponding values that existed during the times of competitive capitalism. A slice of paper, which is not even worth a cent in the American currency, is being exchanged in the world market with goods worth 100 dollar. The United States’ usury capital had established a tributary system on that way. The US armed force was the force of coercion in this system.

We observe that in the 21st Century, the imperialist capitalism has turned into a Mafia Dictatorship that oppresses, exploits and alienates the whole humanity. Under these circumstances, the “community with a shared future for mankind” has emerged, as comrade Xi Jinping states.

Revolutionary forces in each and every country are now not only embracing the working classes but the whole people and the entire humanity.

The enemy of the revolution is a very small community we can call the “imperialist mafia”, with the United States at its core. This community is alienating humans from their labor, from the fruits of their work, from the society and even from its own sex. The contradiction between the imperialist system on the one side and humans and nature on the other has reached such an extreme degree as to attempt to convert women in man and men in women.

Liberalism has killed humanism, which was his twin brother. From now on, socialism with its focus on humanity carries the banner of humanism.

Now, the strategy of the revolution foresees to unite the entire humanity and all states against the US hegemony and tribute system. In each and every country, the revolution progresses on the ground of the reflection of this confrontation.

Today, the prior target is to eliminate private property of the global usurers, in other words the global mafia.

In is very noteworthy that states with their desire for independence are the main driving force of revolution in our days. This is in so far not surprising, as states are an organized force that is armed.

The struggle of the states against hegemonism takes place on the armed, economic and political fronts.

On the armed front, the struggle of the states of Syria, Palestine, Turkey, and Russia against US hegemonism is going on with full throttle today.

On the political front, besides of all states of the world specifically states of Western Europe and even some NATO members are struggling against US hegemonism.

Today, the working class is the vanguard of the revolution, because it is the class that will, together with itself, eliminate all other classes as well and is uniting humanity in a shared future.

The Covid pandemic has demonstrated that capitalism has already killed Humanism.

The Community with a Shared Future for Mankind has already emerged. The banner of humanism is rising high in the hands of the political parties of Scientific Socialism.

The United States’ reign of Dollar is crushing down, and their armed forces are insufficient for their claim of global hegemony. Besides, Asia has become the locomotive of the world economy.

Our era is the era of National Democratic Revolutions and opening to socialism as demonstrated in the Chinese example.

The rising civilization is public-centered, human-focused, humanist, sharing, and values the private initiative in as far as that served the societies’ interest.

In the current times, Artificial Intelligence and robots are replacing manual labor and partly even brainwork. But that development does not change the reality that “humans are the greatest productive force”.

The basis of the system of exploitation will weaken to the degree that robots are employed, because, as machines cannot be exploited, neither can robots. With the opportunities that artificial intelligence offers to the productive forces, the scarcity of goods will finish, the basis of property and private profit disappear and classes and their struggle will end. Therefore, there will be no more capitalist and working class. Undoubtedly, this process will not occur by itself, it will advance with the revolutionary struggle of the mankind.

In a world where the production satisfies the human needs, there is neither ground for imperialism nor for any system of domination. Those supporting a harmonic living of the mankind will substitute the moral and ethical values that were instruments for the exploitation of humans by humans.

Humanity will without doubt face new problems with the use of robots in production. The extreme development of technology thanks to artificial intelligence will lead to an extreme exploitation of the world’s resources, in a degree we cannot even imagine today. In that situation, humanity will have to invent new products and new models of production.

The Scientific Socialism can full its duty to show the way in the struggle against oppression and exploitation by modernizing and localizing itself. In this struggle, the key question is that vanguard parties get to government by mobilizing their nations and working classes.

As Vatan Party, we state that Turkey that is on the frontline of the war against US imperialism has arrived in a period of historic opportunity. And we promise to the whole mankind: In the coming years, we will contribute to the great cause of humanity as Turkey’s governmental party.

I greet you wholeheartedly with feelings of solidarity and offer my respects.