The meeting of Bolívar and San Martín in Guayaquil 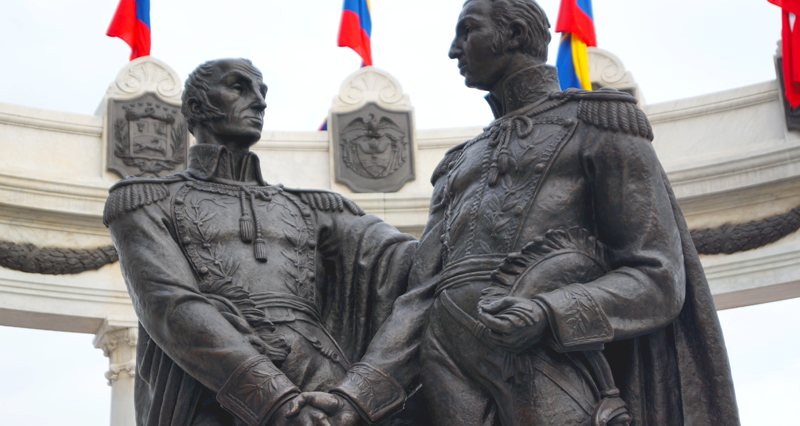 If we were to use modern terms, we would have to say that this July 26 and 27 have been commemorated as what could be considered the most important Summit meeting in the history of Latin America: the one that gathered General José de San Martín, the Liberator of the South and our Liberator and Father of the Nation, Simón Bolívar.

Without a doubt, we are facing an event of the greatest relevance: not only because of what it’s meaning at the time of occurrence, but – and above all – because of the projection that this fact has had throughout history.

If we review the texts referring to the event and written over time, we will discover that the fundamental axis of the story – in which there were no direct witnesses – deals with the differences in thought and ideas that San Martín and Bolívar had. Looking at from a historical perspective, today in the 21st century, in the midst of a situation of extreme regional and global conflict, does anyone in their right mind believe that this is the most important thing to highlight when remembering this event?

Although perhaps someone could accuse me of speculating, I have not the slightest doubt that, after reading the documents that are available to analyze and study the Guayaquil Meeting, which reaches its bicentennial annversary, it can be affirmed with full conviction that San Martín and Bolívar made contradiction the catalytic instrument to advance in what they did agree on and for which they gave the best of their glorious lives: the independence and freedom of Spanish America.

It is true to say that Bolívar and San Martín arrived at the meeting in totally different and even opposite conditions. This circumstance -somehow- influenced the spirit with which the Liberators attended the interview and modeled its results.

On July 13, just a few days before, San Martín had written to Bolívar to inform him that he would gladly receive the help he had offered to achieve Peru’s independence and let him know that he would sail to Guayaquil to meet him in Quito. He did not know that the man from Caracas had been in the port for two days, nor did he know the movements that had taken place in the city during the last few days. The arrival of San Martín in Guayaquil was a surprise for Bolívar. He only found out when the schooner Macedonia, which was transporting San Martín from El Callao, had entered the mouth of the Guayas River, sailing against the current, and had dropped anchor on the island of Puná .

On the deck of the ship, San Martin shifted restlessly from port to starboard. As he approached the mainland, uncertainty and concern increased without even having a certain explanation of the feeling that accompanied him. Perhaps it was due to the pressure of returning to Lima empty-handed without fulfilling the proposed objective. But he was also moved by the proximity of his meeting with the Colombian Liberator from whom he had heard so many diatribes, whose truth or falsity he could now verify.

He could not know that he was only a few hours away from the unleashing of events that, despite the fact that they would take place in a period of no more than 20 hours, would give rise to dissimilar opinions and interpretations that oscillate in a wide spectrum that goes from myth and legend to the purest speculation.

The historians of defeat and conflict present as the essence of the meeting the disagreements of different men, with different origins, uneven past and who – as has been said before – attended the meeting in unequal conditions. It is true that Bolívar considered the matter of Guayaquil “solved” with the occupation of the city by the Colombian army. But that does not obscure from history the meeting and fraternal conversation between the two greatest men born in the entire history of this region of the world.

It is worth mentioning that the decision regarding Guayaquil was made by Bolívar because of the concern generated by the political weakness of San Martín, who could be influenced by the interests of the Lima aristocracy, very prone to Spain and who had approached independence through interest, not by thought. This was a premonition of conflicts and instability, a characteristic feature of Peru, from then until now, 200 years later, when once again the oligarchy that sees the loss of its interests, bets on imbalance, insecurity and chaos.

Bolívar’s concerns went far beyond the debate over the status of Guayaquil and the vicissitudes that could be generated from the internal contradictions that afflicted the province. Like San Martín, although from a different location, the Liberator looked at these events from a totalizing regional perspective in the face of America’s independence.

From the final moment of the summit meeting between the two great Liberators of America, what history has recorded enters the field of interpretations and also of elucubrations. Both may have been made from ill will or good elucidation around the observation of events that can only come from the later writings and comments of the protagonists. And in this matter, when turning to historians, one finds a wide range of opinions that point to such a large space that goes from the absolute contradiction and the strong rhetorical confrontation between San Martín and Bolívar to that of a healthy productive exchange in the that the known and accepted differences were put aside to focus the debate on what united them, which was the need to complete independence.

Rivers of ink have been spilled to argue in both directions. In both cases, fundamental nouns give rise to support each position. In this instance, the benefit is to extract the positive from the encounter in order to deliver it as sustenance so that the new generations receive the influence that these two great men bequeathed to us.

After reading some works on the subject, inspired by an exclusively San Martinian vocation from Argentina and another, Bolivarian from Venezuela, both endowed with a strong purist view of the performance of the two Liberators, I consider that both provide visions that are not very useful for assess the meeting in a fair dimension. From both sides, nationalist interests can be discerned that seek to achieve absolute truths in the actions of one or the other liberator. The truth is that in them, clearly, a spirit of the Great Homeland prevailed that was above the evident existing differences. Concluding with difference and not with convergence, is typical of small minds that fail to understand the service they did and the work that Bolívar and San Martín delivered to all Ibero-Americans.

There are no real possibilities of making a detailed study of this fact: the sources of information are multiple and the conclusions obtained are dissimilar. Trying to accurately obtain the boundaries between what is true and objective in relation to what is false and fictitious, that is, with what is imagined from human subjectivity, is a very difficult task.

On the other hand, taking the facts out of context and from the circumstances in which the Liberators had to live and act does not contribute much to the elucidation of the event. From this point of view, it is worth taking care of the original documents, that is, the direct sources so that everyone can draw their own conclusions.

In this sense, it is imperative to analyze the report that Lieutenant Colonel José Gabriel Pérez, Bolívar’s secretary, on his instructions, sent to Colombia’s foreign affairs secretary Pedro Gual on July 29, 1822, two days after the second meeting among the Liberators. Only this document and Bolívar’s letters to Sucre and Santander on the same day can provide a real idea of the Liberator’s opinion on the meeting.

From the perspective of San Martín, only the handwritten letters that the Protector sent to General Miller on April 19, 1827 and the one addressed to the Peruvian Marshal Ramón Castilla on September 11, 1849 seem to be valid.

Wanting to make a summary of the interview, it can be concluded that the differences between Bolívar and San Martín were circumscribed to two aspects:

Likewise, they agreed on most of the aspects discussed. Among them it is worth highlighting:

When reviewing these direct sources, it can be concluded that there were many more points of agreement than disagreements between the Liberators. Furthermore, none of the differences had any importance in the subsequent course of the war or in the political events that were to mark the future of Hispanic America. In more substantial elements -which were not the subject of debate in Guayaquil- but which would have fundamental importance for the future of the nascent republics, the two Liberators were exponents of a very advanced thought for their time.

No one can doubt that both were possessors of a thought that aimed not only at political independence, but were also capable of discovering with crystal clarity the challenges that the American republics would face in their economic future before a Europe and a United States that already showed their voracity and appetite for the great wealth and the enormous productive potential of America.

Being the economy “the substance” of government management in terms of the search for happiness and the solution of the most pressing problems of the people, it is imperative to highlight the thought of both Liberators as an essential element of a conceptual and practical closeness that had they been allowed, they would also have put it at the service of the peoples of South America, just as they did with their swords on the battlefields.

Their meeting in Guayaquil is inscribed as one of the greatest events in the history of international relations on the continent. Two hundred years have passed and neither time nor distance can cloud the greatness of such an event. They had to overcome great obstacles to get there, both displayed a foolproof perseverance, an unprecedented willpower and conviction to face and overcome any type of inconvenience that arose in their extraordinary effort to achieve freedom and independence. obtained two years later in the fields of Ayacucho, in a fact that filled them with glory despite the fact that neither of them participated directly in this battle that would definitively consecrate the patriotic victory for which they gave the best of their admirable lives sowing with it, the identity of an America that must inexorably advance towards its integration.