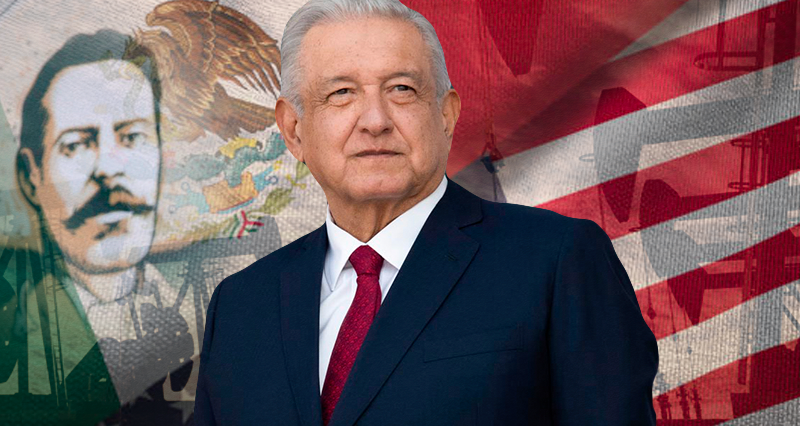 Mexico’s energy reforms keep on fueling tensions with the country’s northern neighbor, the United States. Mexican President Andrés Manuel López Obrador presented the latest public episode in his daily press conference on July 28, when he questioned the free trade agreement between Mexico, United States and Canada, the USMCA. USMCA was signed in 2018 as a follow-up on the infamous NAFTA.

“Not going to hand over independence to foreign government”

Asked about beginning consultations within the USMCA and whether his government was willing to abandon the agreement in order to defend national sovereignty, President López Obrador responded:

“I spoke of the points that help us understand the issue:

First, the proximity to the largest market in the world, and hence the importance of the treaty, that is important without a doubt.

Two, I talked about honesty.

And, three, of justice. Well, first of all, even in the case of the most important market in the world, if having access to that market implies giving up sovereignty, we do not accept that. We are not going to hand over our independence to any foreign government. In addition, they are not right, even though they have many lambiscones, traitors, who applaud them in our country, they are not right.”

The Mexican President thus reacted to US protests against his government’s energy reforms. In a press statement on July 20, the US Trade Representative Katherine Tai had stated that Mexican measures “undermine American companies and U.S.-produced energy in favor of Mexico’s state-owned electrical utility, the Comisión Federal de Electricidad (CFE), and state-owned oil and gas company, Petróleos Mexicanos (PEMEX)”.

Joined by Canada, the US government filed a complaint letter and introduced legal consultations within the USMCA framework. The three sides have time to find an agreement till August 19. If not successful, they can request a dispute panel.

The US text in detail complains about the following Mexican measures:

1. The Electric Power Law, as amended, calls the national operator to favor state-owned company CFE over private competitors in dispatching electricity into Mexico’s grid. The letter complains that “Mexico has failed to accord national treatment to U.S. goods” and “Mexico has failed to accord to U.S. investors and their investments treatment that is no less favorable than that it accords, in like circumstances, to Mexican investors and their investments”.

2. Inaction, Delays, Denials, and Revocations of Private Companies’ Abilities to operate in Mexico’s Energy Sector. Specifically, the Mexican government and bureacracy is criticized by the US officials by hindering US companies ability to operate renewable energy facilities, such as wind and solar installations, import and export electricity and fuel, store or transload fuel and build or operate retail fuel stations”.

3. Postponement of Requirement to Supply Ultra-Low Sulfur Diesel for Pemex only. In December 2019, Mexico’s Energy Regulatory Commission (Comisión Reguladora de Energía, or CRE) issued a regulation granting only Pemex a five-year extension to comply with maximum sulfur content requirements under its applicable automotive diesel fuel standard, which as of December 2018 required ultra-low sulfur diesel to be sold throughout Mexico. This measure practically excludes US exporters of diesel to Mexico.

Mexican oil refinery inaugurated to decrease imports from the US

The Mexican government has long been pursuing an energy policy that sthrenghtens the role of state-owned companies in the sector. In addition, Mexico has recently inaugurated new oil refineries on its soil. In his government report in the third quarter of 2021, the Mexican President had stated:

“But, most importantly, we stopped privatization in the energy sector, that is, in oil and electricity. This new energy policy seeks to produce the gasoline that the country uses here in Mexico and stop importing it. To this end, resources continue to be earmarked for the modernization of the six existing oil refineries. In three years, public investment for this purpose has amounted to more than 33.58 billion pesos (TN-1). When we took office these refineries were abandoned and the previous administration had begun to sell off the plants (such as the hydrogen plants) inside their facilities. At the beginning of our administration the refineries were producing 511,000 barrels per day and now they process 706,000 barrels; that is, 38 percent more.”

On July 1, López Obrador inaugurated the Olmeca oil refinery in Dos Bocas, which will with a capacity of 340.000 barrels per day become PEMEX’ biggest facility.

President López Obrador meanwhile cited in his press conference article 8 of the USMCA, which “recognizes Mexico’s Direct, Inalienable, and Imprescriptible Ownership of Hydrocarbons”.

Mexico’s retreat from USMCA? “We will see when it comes to that, now, it is about arguments”

Asked whether he would retreat from the USMCA, López Obrador responded first by saying “we see that when it comes that”, and added he would reject “vulgar journalism”. The Mexican President also emphasized the dependency of the United States from the production in Mexico.

He finished his words by saying “So, what the conservatives want is to tie up knives, they are very fundamental. But this is not so, this has to do with arguments”.

But given López Obrador’s principled and public stance on strengthening the public energy sector in Mexico, and the US’ strong drive towards energy transition, which among other aspects opens new spheres of investment for US companies, strong discussions seem unavoidable.