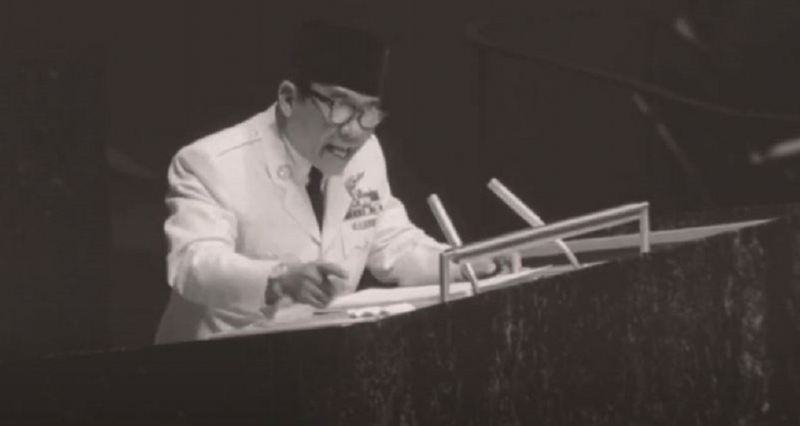 A libertarian voice loaded with virtue is rising from the easternmost edge of Asia… A pioneer speaks: “Millions of Asian and African peoples have joined the ranks of independent countries. This is a fait accompli. After the Second World War, there is probably nothing more important than this. It has an explosive force at least the size of a hydrogen bomb and constructive power of at least as much as atomic power. (…) The old standards have disappeared in international relations and international spiritual ties. “

And the leader continues his rebellious words: “The new rule cannot be based on the basis of being subject nations to nations, or of people to people. The new balance cannot be imposed as before. For the future of justice and the formation of equal conditions demanded by all nations of the world, it is imperative to create an atmosphere of friendship and understanding among nations. (…) We do not demand any special conditions or special privileges. We just want equality and equal rights and we insist on it. At the same time, we take responsibility for equal obligations for the security of the world and the well-being of humanity.” (1)

This leader is President Ahmet Sukarno, who is considered the Atatürk of Indonesia, the most populous Islamic country in the world. These rebellious words of his, perhaps, express a historical warning in the speech he made looking into the eyes of the Americanist rulers of Turkey in the General Assembly of the Turkish Grand National Assembly on April 24, 1959.

It has been 63 years, but it is as fresh as if it was said yesterday, and it is being a solution to the needs of humanity today.

Sukarno, the host of the 1955 Bandung Conference, which was the first effective debut of the developing countries on the world stage, made another speech that shook the world with the title “We Must Establish the New World” at the United Nations General Assembly on September 30, 1960.

He exclaims: “Imperialism and the struggle to defend it is a great crime in our world. Most of the gentlemen in this Council disclaim imperialism at all. Gentlemen, many of you were born free and will die free. Some of you were born in countries that practiced imperialism against others but never suffered from it. But my brothers in Asia and Africa recognized the whip of imperialism. They suffered. They accept the danger, craftiness, and perseverance. (…)

“We are trying to build a world where everyone can live in peace. We want to build a world of justice and prosperity for all people. A new world without imperialism, colonialism, and exploitation!” (2)

He was also one of the callers of the 1961 Belgrade Conference, which established the Non-Aligned Movement.

The name of this great revolutionary is actually Ahmet Şükrani. However, when expressing his surname in Portuguese, it became Sukarno. We commemorate this great revolutionary leader with whom we share the same aspirations, with respect and gratitude on the 52nd anniversary of his death. Because we need more leaders like Sukarno today. Especially in the Islamic world.

He was born in June and died in June

June is Sukarno’s birth month (6th June 1901), the month in which his five principles (Pancasila), as famous as Sukarno, were formulated (1st June 1945), and Sukarno said farewell to the mortal world on 21st June 1970. This is why June is commemorated as the “Month of Sukarno” in Indonesia.

An exhibition was organized under the leadership of Professor Doctor Darwis Khudori from Le Havre Normandy University to commemorate Sukarno this year in Paris in June. On the initiative of the Paris-based solidarity movements “Nations Emergentes” (Developing Nations) and “Bandung Spirit Network” in collaboration with ANRI (National Archives of the Republic of Indonesia) and the Republic of Indonesia and under the auspices of the 6 Mayors of Paris , (Visionary Sukarno Under the theme ) Sukarno’s photographs are exhibited at Gallery Luxembourg. This exhibition will come to Turkey through BRIQ next June.

Ahmet Şükrani was the son of a Javanese teacher and was born in Surabaya. His original name was Kusuo Sosro, but among Muslims, he was known as Ahmed Şükrani. He had completed his primary education in a village school and his secondary education in a Dutch colonial school. When he was a high school student in Surabaya, he resided in the house of Ömer Said Çokroaminoto, a friend of his father who was one of the leaders of “Sarekat Islam”. Influenced by Çokroaminoto, the man who founded Southeast Asia’s largest political party before the First World War, he leans toward an anti-colonial political stance.

He married Çokroaminoto’s daughter in 1920, the year after he achieved his high school diploma, and was patronized by his father-in-law. In the same year, he enrolled in the architecture program of the recently established technical institute in Bandung, but after his father-in-law was arrested, he returned to Surabaya and worked as a railway clerk there for a short time. After Çokroaminoto’s release in 1922, he returns to school and completes his education.

More interested in politics while studying in college, Sukarno joined the youth group Jong Jawa and eventually rose to the position of leader of the Bandung department. At that time, Bandung was a centre dominated by innovative Islamist and socialist views. During his senior year, he founded a new association. The aim of the association was to ensure the full independence of Indonesia. When he graduated, he opened an engineering and architecture office in Bandung with a friend.

Focusing more on politics, Sukarno began writing articles trying to reconcile Islam and scientific socialism on the basis of nationalism. In his writings, he argued that Islam, Marxism, and nationalism should be united in the cause of Indonesia’s independence.

He established the Indonesian Nationalist Party (Partai Nasional Indonesia [PNI]) in July 1927. The party became the centre and voice of the Indonesian national movement before long. However, due to his opposition to the colonial government, his party was dissolved in 1930 and he was sentenced to four years in prison. Sukarno was released two years later, joined the Indonesian Party (Partai Indonesia [PARTINDO]), his own party’s successor, and was chosen as its leader.

Due to the party’s rapid expansion, he was arrested once again in 1933. He was exiled first to the eastern Indonesian island of Flores, and four years later to Bengkulu in Sumatra. While he was in exile, it was prohibited to read political books. Ahmet Şükranı states that he read religious and cultural books and especially improved his knowledge about Islam.

Sukarno, who was released with the Japanese occupation in March 1942, was appointed the chairman of the Central Advisory Council formed by the military administration. Sukarno presented the “Pancasila,” which means “five principles,” in his well-known address on June 1, 1945. Pancasila evokes the “6 arrows” of Kemalism. “Five principles”, consisting of the principles of nationalism, just and civilised humanity, democracy, social justice, and belief in a single god, were accepted as the basic philosophy of the state to be established.

Sukarno declared the independence of Indonesia on August 17, 1945, in the capital, Jakarta, together with Mohammed Hatta, one of the other important nationalist leaders and was elected head of state by the 135-member Indonesian Central National Committee.

After the imperialist Dutch military forces took control of the capital city of Jakarta, Sukarno moved his government headquarters to Yogyakarta in Central Java. While he was fighting for independence against the Dutch during his four and a half years at this location, he was also dealing with government crises and various groups on the other hand.

However, on December 19, 1948, along with other government members, he was arrested by the Dutch soldiers, who also occupied Yogyakarta, and exiled to the island of Bangka. Six months later, the Netherlands surrendered, thanks to the increasing international support for Indonesian independence and the national struggle waged inside. On December 27, 1949, the day after Indonesia’s independence was officially recognised, Sukarno returned to Jakarta from Yogyakarta.

Founders of the non-aligned movement

He helped launch the Non-Aligned movement by being among the organizing leaders of the Bandung Conference in 1955. He continued his struggle against Dutch and US imperialism. He waged a fierce struggle to end the Dutch occupation of New Guinea (West Irian). Suspending diplomatic relations with the Netherlands in August 1960, he resorted to military force to liberate New Guinea. After this, he got closer to the Soviet Union and China and took against the USA. He succeeded in annexing New Guinea to Indonesia in May 1963 and was later declared head of state for life by the parliament.

He became the target of the American coup

The US administration was having it out for Sukarno. Especially his alliance with the Indonesian Communist Party, the fact that the Indonesian Communist Party gained more than 30% of the votes in the elections, was counted as a reason for doing away with Sukarno. On September 30, 1965, hundreds of thousands of communist party members were killed in a bloody coup led by the US collaborator General Suharto. Sukarno had to transfer some parts of his presidential powers to Suharto on March 11, 1966. He was dismissed from the post of head of state by the provisional parliament in March 1968 and placed under house arrest by order of Suharto, which would last until his death. When he died in Jakarta on June 21, 1970, he was buried next to her mother in Blitar, East Java, instead of the national heroes’ cemetery in Jakarta. Although the ideology of Sukarnoism was banned until the end of the 1970s, Sukarno’s dignity was restored and his tomb was made a place of pilgrimage by the public. His daughter, Megawati Sukarnoputri, became Indonesia’s fifth president between 2001-2004 years.

One of the people who made our world beautiful

Sukarno, a close friend of revolutionary leaders, such as Nehru, Mao Zedong, Zhou Enlai, Tito, Nasser, Nkrumah, Ho Chi Minh, Che Guevara, and Fidel Castro, also had earned the deep respect of J. F. Kennedy and De Gaulle. Sukarno, who fought against colonialism and imperialism throughout his life, was a big fan of Atatürk. He was most influenced by the Turkish revolution, he advocated the separation of religion and state affairs in Indonesia, especially as is the case with Turkey.

We should get closer with Indonesia

Sukarno’s hometown Indonesia is an archipelago state of more than 17,000 islands. Indonesia, with a population of 279 million, is an important Asian country with the world’s most fertile soils and various underground riches, including oil. Currently, the Indonesian Struggle for Democracy Party, which is the successor of Sukarno’s Indonesian National Party, is in power. Sukarno’s daughter, Megawati Sukarnoputri, recommended Joko Widodo, who was elected president by popular vote in 2014 and 2019, for this post. Joko Widodo advocates for an independent, sovereign, strong and effective Indonesia.

It is a necessity for Turkey to be in close relationship with Indonesia in building the new international order and establishing the production economy. We wish Sukarno’s great aspirations will become a strong bridge between our nations.