“Where we lack sovereignty, we lack jobs” 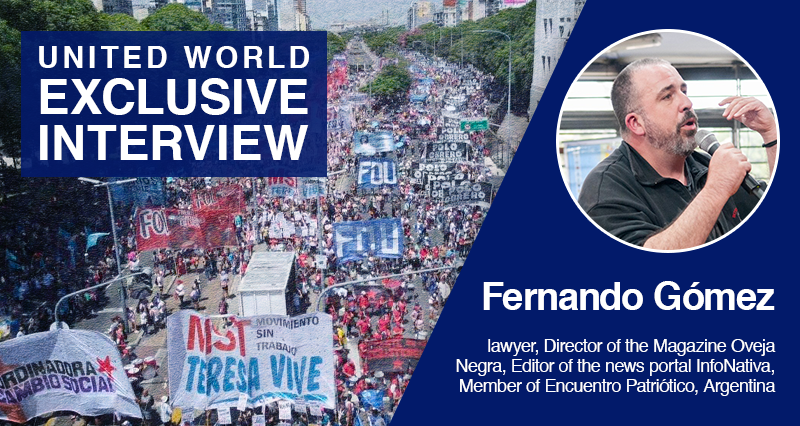 As other countries, Argentina is going to economically hard times. The country faces high inflation, the national currency is weak and additional pressures come from long time relations and recent agreements with the IMF. In the last weeks, the people have started protesting the economic situation in demonstrations and on the streets.

On the economic situation and the protests, we spoke to Fernando Gómez. Gómez is a lawyer, communicator, Director of Oveja Negra Magazine, Editor of InfoNativa Portal, Peronist militant, member of the collective of the political organization Encuentro Patriótico. He has taken part actively in the recent protests.

How do you describe the latest protests in Argentina on the subject of the economy?

Argentina is going through a stage marked by the worsening of the economic crisis that has been dragging on for seven years since the rapid restoration of the neoliberal dogma that determined the subordination of economic development to the satisfaction of the interests of the centers of power. Political tensions appear within the forces that make up the political system, whose legitimacy is deteriorating rapidly. The majority of our people see in their pockets, on their tables and in their daily subsistence, the consequences of an unbearable social pain that aggravates, dangerously, the crisis of political representation currently existing.

The social protests of the last time are framed in this triple crisis that crosses the local political dynamics. Massive mobilizations of social and popular organizations that are based on representing the most humble of our country, those who experience poverty as a chronic and daily scourge, mark the daily agenda of street protests.

Strongly stigmatized by the media, their demands for work and dignity are blurred by occasional spokespersons of the political system or by the narrative of the media, which present the protests as tools to claim more subsistence subsidies from the State. Nothing can be further away than that from the horizon of Social Justice that runs through the most deeply rooted traditions of our people.

On the other hand, receiving strong media attention, there are minority reactions from social sectors linked to the different expressions of the Argentine right wing or liberalism, which are mobilized for exclusive reasons of an ideological nature and which, in spite of being opposed to the government, are those who hold the privileges of the economic model that remains unalterable in the country.

“Half of the economically active population has no registered job”

What are the dominant demands of those who are protesting? To whom are these demands addressed?

In Argentina half of the economically active population does not have a registered job. An important portion does not even have salaries and the family economy is sustained by subsistence activities. It is an enormous social part of Argentina, silent and silenced, that forges community where politics is subtracted from its transforming responsibilities.

From “work and dignity” to “altering the government’s economic course”

The current demands are for work and dignity, in the medium term to condition the government to alter the economic course that inexorably leads the country to a worsening of the social crisis experienced by the vast majority of our compatriots and in the long term, there is a dispute in full crisis to build a social agenda that puts the humble as a priority response in times of urgency.

The government is the main addressee of the claims that, from inside and outside the government itself, accumulates claims to modify the chosen course of remaining subordinated to the mandates of the International Monetary Fund.

We are also the fifth largest producer and the fifth largest exporter of beef. We are located in the famous lithium triangle, being one of the countries with the highest production capacity for a product whose value grew 500% in the last year. We are the 29th oil producing country, the sixth that increased its production the most during 2021.

Thousands of ships depredate our Argentinean sea, our mountain range incorporates mining resources and the Patagonian plateau is in open dispute by multinationals seeking from gold and rare earths, to the novelty of the famous green hydrogen. Above all, land. Lots of land.

At the same time, our country has a housing deficit that reaches 3,500,000 homes. It lacks railroads. It needs trains and ships. In the detail of goods that we import, we see millions of jobs that are generated abroad and that we lack in our land.

“An immensely rich country condemned to dependence on foreign needs”

Where we lack sovereignty, we lack jobs.

These are the problems of our country. We are an immensely rich country, condemned to economic dependence on foreign needs.

In addition, since 2018, under the responsibility of the government of Mauricio Macri, the destiny of our country was conditioned by contracting a record loan with the IMF. The current government of Alberto Fernandez, arrived representing the enormous social majority that rejected the agreement with the IMF, but today the pact with the IMF was legalized and legitimized and its adjustment recipes are executed in a shameless manner.

Therein lie the conflicts that our country is going through.

How was the Argentine government’s reaction to these protests and their demands?

The government of the Frente de Todos is characterized by an unbearable self-inflicted impotence. It can be receptive to social demands and not resolve a single claim that it claims to be moved by. It can correctly characterize a conflict and do the opposite of what it describes to resolve it.

“A government that can describe reality, but not transform it”

It is a government that can describe reality, but not transform it, thus denigrating not only the proper sense of politics, but also the sense that in a democracy, to be able to conquer with the vote of the vast majority the control of the institutional levers of the National State, which ends up not being able to change anything.

How do you evaluate the change of Minister of Economy in this context?

The appointment of Minister Silvina Batakis, even before she was sworn in, was characterized by the ratification of the agreement reached with the IMF, and she quickly focused on guaranteeing prerogatives to the economic power in order to stop the devaluation of our currency and, with it, the violent inflationary effects that threaten the economy of most Argentine families.

There is no change whatsoever in the economic course implemented by the former Minister of Economy, Mr. Guzmán, and for that reason, he announced an even more severe adjustment program on public finances which threatens to deteriorate the triple crisis that the national economy is already suffering.

On the one hand, U.S. representatives have recently traveled to Argentina. On the other hand, Argentina is evaluating cooperation in China’s Belt and Road and even becoming a member of BRICS. Where do you place these protests in this context?

The oscillating geopolitics of Alberto Fernandez’s government seems far from the daily agenda of the popular majorities. Plagued by urgencies, the reality of the protests that cross our country cannot be linked to international alignments.

However, the causes of the economic deterioration are severely linked to the political dependence of Argentina to the imperial pretensions of the United States.

On July 26th, Alberto Fernandez will meet with Joe Biden, while the investment agreements with China remain paralyzed in bureaucratic spheres that depend on his close ally Gustavo Béliz.

The threat to our sovereignty and economic dependence are not only ideological problems for those of us who are nourished by Peronism and, therefore, by revolutionary popular nationalism. It is an urgency for this stage marked by opportunities for Argentina, which only nourish the balance sheets of a handful of economic groups of capital or at the service of foreigners.