British national captured in Mariupol: The US sends weapons to YPG via Ukraine 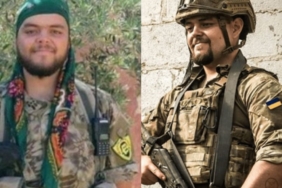 Aidan Aslin is a British national who fought as a mercenary at the side of the YPG/PKK in the north of Syria in 2015 and 2016. Upon his return to the United Kingdom, he was detained, but released afterwards and went back to Syria. He expressed himself in support for a so-called Kurdish autonomous region in Syria and called Western countries to support that effort more strongly.

In 2018, Aslin went to Ukraine and engaged in fighting there. Russian forces captured him in Mariupol in the Donetsk region in April 2022.

He was trialed by the Donetsk authorities of being a mercenary and sentenced to the death penalty. He is currently detained in the Donetsk region awaiting the execution of his penalty. The British government protested against Aslin’s conviction.

John Mark Dougan has interviewed Aslin on his past activities in Syria and published the interview on Youtube. Below UWI documents the parts of the interview that concern Aislin’s service for the YPG/PKK. Aslin’s statements are enlightening also in the context of the Astana meeting today between Russia, Türkiye and Iran on Syria. They show clearly the connection between the conflicts in Syria and Ukraine.

John Mark Dougan interviewed Aidan Aslin in the prison where he is being held. UWI publishes below parts of the interview.

Dougan: The most surprising revelation to me was American and NATO weapons sold by corrupt Ukrainian officials to his former YPG. The former cop in me says he’s got more information to give, but I didn’t want to push it and risk his appeal. I’ll try to do a follow up interview after his appeal decision.

Aidan Aslin: I went to Syria, you know, and suddenly some confusion. People think I was fighting against the regime, which I wasn`t. People who know the Syrian conflict know the YPG are neutral with the regime and there`s been negotiations for a long time with Russia and everyone else like meditating trying to push a peace process. In Syria our enemy was ISIS, but also Turkey.

And people might question like how can I serve in Ukraine military, which is not NATO, while Turkey is in NATO. I can understand some people`s thinking, but you know, from my point of view I can`t go to a new country and tell – «Oh, you should hate the Turks because they do this to this group of people».

Personally I don`t work with Turkish regime. When I left Syria, they invaded Afrin, they caused so much destruction, damage, and also they like the Free Syrian Army.

When I returned from Syria to Britain, the British government arrested me… I had to go to the police station three times a week.

So I was looking for places to move, somewhere where I wouldn`t be by Britain… I saw few options in the French Foreign Legion, there was Ukraine and also Russia….

One of my Kurdish friends used to live in Moscow… I`m 100% sure he was SBU (Ukrainian Secret Service, UWI), because I don`t think there is any other departments other than that. I think it was SBU that went to Afghanistan… They wanted basically sell weapons for a price.

Special Forces (SF) units like American weapons, like rifles and stuff. The Americans and the West have given them it so much, like American weapon systems, they gave it to SF units, Ukrainian SF, the 62-millimeter motor…?  It`s funny because the Kurds have the 62 millimeters as well…

Did your Kurdish friend make any specific comments on the weapons the Americans were going to send?

My Kurdish friend said they apparently were going to be sending some new rockets. He wasn`t specific… They can really use it in fight against Turkey.

They are in NATO, but at the same time, they use NATO weapons against Kurdish civilians, Syrian civilians, and it frustrates me.

So do you think perhaps, may be US government is specifically following weapons to Ukraine to give to YPG?

Yes, it`s definitely definitely possible. Because if you look at the political dynamic between Turkey and NATO, Europe, EU over past six, may be 10-11 years, there was the crisis from the refugees, they were totally using it as a weapon… You have America supporting the Kurdish YPG against ISIS they totally hated. They were going to let these refugees into Europe.

Did your friend mentioned by chance how many weapons or how much they were costing?

So America is using American taxpayer dollars to send the weapons to Ukraine, which are being sold from the Ukrainian military to the Kurds who were paying for it with American dollars?

The weapons bought by the Kurds are being used against Turkey who happens to be US ally in NATO. The funniest thing about it is basically a full circle.

Yeah, two circles. You have Turkey, they have NATO (F-16, NATO boards, missiles), they use it on Kurds, who return with US made weapon systems against Turkey.