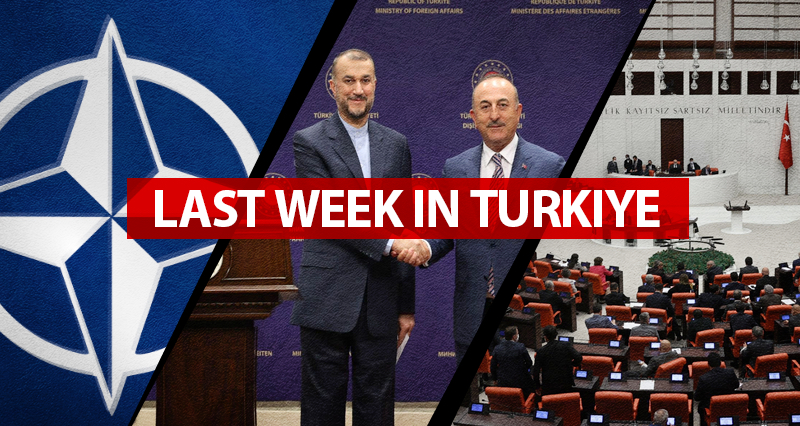 Last week, the public agenda in Türkiye has been busy with three main topics.

First was the agreements reached in the NATO Summit in Madrid, and the domestic reactions and oppositions to the negotiations over Türkiye’s veto power for Sweden’s and Finland’s ascension to membership.

Second was the visit by the Iranian Foreign Ministry to Türkiye and his discussions with his Turkish counterpart as well as President Erdogan about the regional issues.

Third was the recent decision to raise the national minimum wages, as a measure against the rising living costs.

Negotiation with NATO and domestic reactions

It was announced that the NATO applications of Sweden and Finland were accepted by the member states including Türkiye during the recent NATO summit in Madrid.

This process brought heavy discussions among domestic political groups in Türkiye, some of which outright suggesting Türkiye should leave NATO and going for a public campaign over the issue.

One of the first criticisms came from the government-allied Nationalist Movement Party (MHP) leader Devlet Bahceli. Bahçeli said “Türkiye is not desperate for NATO. Even leaving the organization can be discussed if the conditions get that disadvantageous. We did not come to existence thanks to NATO, and we will not perish without them. Let them have Sweden and Finland, and open up another front against Russia. Perhaps the best option would be forming another organization including the Turkic and Islamic nations all over the world, in order to balance NATO.”

The main opposition party, the Republican People’s Party’s (CHP) leader Kemal Kilicdaroglu reacted to these statements. Kılıçdaroğlu said “Mr. Bahceli suggested to leave NATO. NATO is essential for Türkiye, but I would still like to see how serious they are as government. The US surrounded Türkiye with its military installations. Their goal is clear. I suggest they bring up the issue of shutting down the US military facilities in Türkiye, to the parliament, and I guarantee we will support it with the same spirit as our founding leaders have done”.

Another critical reaction came from the CHP parliamentary group leader Engin Altay. Altay criticized the government’s inconsistency while celebrating a common understanding of anti-terrorism among NATO members. He said: “We are not surprised by such actions of Erdoğan, this has now become a routine. He has also done that before to Israel, Saudi Arabia and the UAE. He has done it with the Pastor Brunson crisis. I read the agreement. It is an agreement of goodwill only. But we are still happy to see a unified NATO against terrorism. As CHP, we were always consistent against the countries that support terrorism”.

Altay also applied for a request of a closed session in the parliament, for an elucidation of the agreement Türkiye signed with these two Nordic countries.

The Deputy Chairman of the governing party (AKP) Numan Kurtulmus meanwhile stated that “the government has still not fully approved the applications of Sweden and Finland. It has just temporarily removed its veto decision, and has clearly explained that it still hold this veto power if the promises are not kept. In this regard, Türkiye has played its cards well and taken a promise on not supporting any of those terrorist organizations, by these applicants. It is now their decision to keep that promise or not. Türkiye knows what it is doing very well.”

The leader of the Vatan Party Dogu Perincek, has announced the start of his party’s “Türkiye to leave NATO” campaign on June 2nd. Perincek stated “We can see the bloody history of the NATO in Türkiye when we look at the past decades. NATO has been conducting prosecutions, assassinations and massacres against our thinkers and intellectuals over the past decades. This is why it was an issue for Türkiye for already many decades to leave NATO, and not a topic that came up only with Sweden and Finland’s application. Türkiye became a member of NATO in 1951, but has been under a systematic oppression of the Atlantic system since 1945. It is possible for Türkiye to survive as an independent and sovereign nation, by breaking the chains put on by NATO. This is why Vatan Party has initiated ‘Türkiye to leave NATO’ public campaign”.

Public support has been very intense for the stalls that were placed all over Türkiye, to collect as many signs for the campaign. The campaign was accompanied with demonstrations and press statements in front of various NATO facilities and military installations.

The campaign was also resonated throughout international media, especially in countries such as Russia, Iran and Kazakhstan.

On June 27th, Iranian Foreign Minister Hossein Amir-Abdollahian has paid an official visit to Ankara. He met with President Erdogan and Turkish Foreign Minister Mevlut Cavusoglu during his visit. Iranian foreign minister said he discussed the recent developments in Syria with Cavusoglu.

In a joint press conference, Abdollahian has said that Tehran understands Türkiye’s security concerns stemming from northern Syria amid Ankara’s vows over a new military incursion against the presence of the terrorist organizations.

“We understand Türkiye’s security concerns in a very good way. We, at the same time, understand its statements about a special military operation [into northern Syria],” Iranian Foreign Minister Hossein Amir-Abdollahian told at a joint press conference with Turkish Foreign Minister Mevlut Cavusoglu in Ankara.

“We are of the belief that the security concerns of our Turkish friends should be eliminated as soon as possible and in a permanent way,” he stated.

At his meeting with Erdogan, the Iranian Foreign Minister said he discussed the formation of a high-level strategic body between the two countries to oversee the implementation of the long-term cooperation pact.

For his part, Cavusoglu said terrorism is a common problem of all nations and therefore requires global and regional cooperation.

“We have been against one-sided sanctions on Iran and do not approve those sanctions,” Cavusoglu added.

“Our cooperation in the fight against terrorism is important as two neighbors. We also shared our concrete expectations. We need to continue to work together on this issue as terrorism is the common enemy of all of us,” he stated.

In the meantime, Erdogan reiterated Ankara’s determination to eliminate terrorist threats against Türkiye stemming from Iraq and Syria at a press conference following a routine cabinet meeting late on June 27th.

“Our operations that will permanently save our Iraqi border from terrorist attacks continue successfully. As soon as our preparations for completing the deficiencies of the security corridor that we have started to create on our Syrian border are finished, we will start new operations there as well,” he stated.

The US and other prominent Western nations stood against a potential Turkish military move against the YPG, meanwhile Iranian government also not approving the military operations as an ally to Syria. Iran also has militia groups in different parts of the Syrian theater which support Damascus’ fight against the Syrian opposition groups.

On previous Tuesday, the Turkish presidency announced that the President Erdogan will be visiting Iran on July 19th.

Raise in national minimum wage and the ongoing inflation problem

Türkiye has decided to raise the minimum wage in the country by 30%, President Recep Tayyip Erdogan announced Friday, in an effort to safeguard households from soaring inflation.

Effective as of July 1st, the new minimum wage has been set as 5,500 Turkish Liras (around $330) per month, Erdogan told a televised address in Istanbul.

The increase follows a 50% hike as of January, which had lifted the minimum wage to TL 4,250.

“Inflation is a problem not only of Türkiye, but of the whole world,” Erdogan said, stressing the government’s determination to prioritize and address challenges households are facing.

According to the country’s Social Security Institution (SGK), more than 40% of all workers in the country of around 84 million earn the minimum wage.

The government claims that the inflation will fall with the new economic program, which is claimed to prioritize low rates to boost production and exports and aims to achieve a current account surplus.

Erdogan recently said that he expects inflation to come down to “appropriate” levels by February-March next year.

Fueled by soaring food and energy prices, Türkiye’s annual inflation rate rose at a lower-than-expected pace last month but still jumped to a 24-year high of 78.62%, while the consumer price index saw a 4.95% rise on a monthly basis, according to the Turkish Statistical Institute (TurkStat).

This marks the highest reading since September 1998, when annual inflation was 80.4%.

Many opposition parties and groups claimed that the inflation is far higher than what TurkStat claims.

An Anadolu Agency (AA) survey predicted that the consumer price index would rise 4.44% in June monthly, while the economists surveyed forecast annual inflation would climb to 77.74%.

It was expected to reach 80%, according to the median estimate in a Bloomberg survey of 17 economists.

The median estimate of 12 economists who participated in the Reuters poll for annual inflation in June was 78.35%, with forecasts ranging between 72.30% and 81.80%.

The lowest annual increase was in the communication sector with 23.74%.

The largest annual rises were seen in transportation with 123.37%, food and non-alcoholic beverages with 93.93%, and furnishings and household equipment with 81.14%.

Inflation has surged since last autumn when the lira slumped after the central bank gradually cut its policy rate by 500 basis points to 14%.

The rise in food prices was further stoked this year by the economic fallout from Russo-Ukrainian War, as well as the lira’s continued decline. The currency shed 44% against the dollar last year and was down 24% this year before recovering some losses in recent days.