Wave of militarization in Europe, Pt.1: Is Germany coming back? 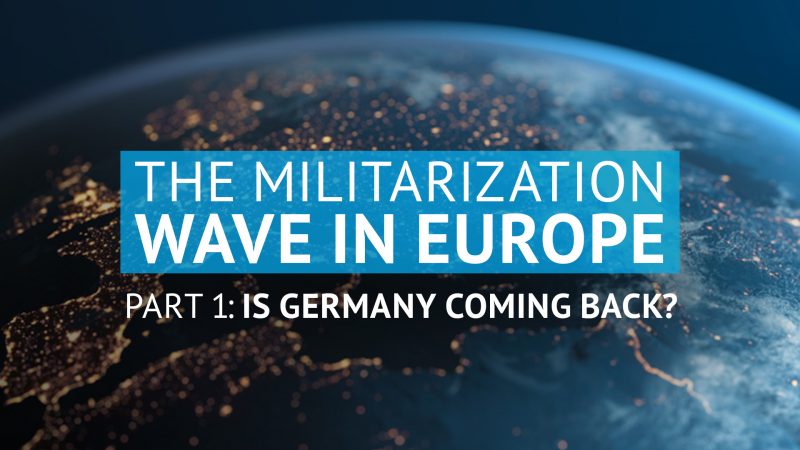 Russia’s military operation against Ukraine triggered a wave of militarization in many European countries. Increased military spending and investment, discussions on conscription, attempts to join NATO and much more. French President Emmanuel Macron’s announcement on June 13, stating that France and Europe had switched to a “war economy”, can be read as the naming of these latest developments. That is the greatest wave of militarization Europe has experienced since the end of the Cold War.

Germany’s Bundestag on 3 June approved the creation of the 100 billion euro special defense fund, which Chancellor Olaf Scholz had announced in response to Russia’s invasion of Ukraine. In the 736-seat parliament, deputies approved the measure 567 votes to 96 with 20 abstentions.
There was a consensus among the parties that make up the majority of the parliament. Germany’s coalition government (consisting of SPD, Liberal Democrats and Greens) and the largest opposition party Christian Democrats (CDU/CSU) had agreed on the budget before the parliamentary voting.

Details of the budget

The budget aims to boost the German army in many ways. The details of the budget make this aim clear. The bulk of the investment is the following:

19.3 billion euros — Will be earmarked for the navy, mainly for new corvettes, frigates and a 212-model submarine. More than 16 billion euros will strengthen the army’s holdings with Marder transport tanks and Fuchs armored troop carriers.

16.6 billion euros — Will be used for updating armored personnel carriers and other combat vehicles. Over the longer term, the Bundeswehr is also eyeing a successor to the Leopard 2 tank, which is supposed to be developed together with France.

20.7 billion euros — Development of the communication system named “SATCOMBw” with programs to ensure digitalization in field operations and purchase of radios.

NATO’s demand has been met

With the new budget, Germany also meets NATO’s demand of “spending two percent of GDP on defense each year”. German Chancellor Olaf Scholz has promised to meet NATO’s request. During Donald Trump’s presidency, this demand caused a bitter dispute between the US and Germany.
Since the end of the Cold War, Germany was on a downward trend both in terms of the number of military personnel and the budget allocated to the army. For instance, Germany has significantly reduced the military from around 500,000 in 1990 to 200,000 today.

In addition to the strengthening of the army, there is also a debate on conscription in Germany. Since the Russian military operation, many politicians have made statements for and against it. Finally, the President’s talk on the issue seems to reveal the importance of the issue. In an interview with Bild newspaper on June 12, Frank-Walter Steinmeier stated that he wanted a public debate on compulsory social service (Pflichtdienst), including military service. He added that introducing such an obligation would not be easy.

He said the following: “The question is whether it wouldn’t do our country good if women and men put themselves at the service of society for a certain period of time. This doesn’t have to be in the armed forces. In my opinion, compulsory social service could be done just as well in caring for senior citizens, in institutions for the disabled or in shelters for the homeless.”

Before Steinmeier’s statement, many politicians had already expressed their views on the issue.

Markus Söder stands on the opposite side. He stated that he saw little point in reintroducing conscription. Besides, to him, there will be a “constitutional problem” if young people are obliged to do a one-year service.

According to the Inspector General of the Bundeswehr, Eberhard Zorn, could conscripts not do what the German army needs to get done. He declared that the armed forces needed “well trained, and in some cases even highly specialized, personnel” to ward off attacks like cyber ones. Thus ”Conscription is not necessary in the current situation.”

Security expert Wolfgang Hellmich SPD tried to draw public attention to the need for consensus on conscription: “We urgently need to have the debate about general compulsory service. Because for that we need a social consensus.”

The Parliamentary Commissioner for the Armed Forces, Eva Högl from SPD, has rejected the conscription.

The Chairman of the Defence Committee, Marie-Agnes Strack-Zimmermann, also spoke out against conscription. To her, the important thing is the modernization of the armed forces: “The Bundeswehr should become a modern, compact army with high-tech equipment and not equipment from the 1990s.”

CDU chairperson Carsten Linnemann told that he had been striving for the implementation of compulsory social service for a long time. “Personally, for years I have been campaigning for the introduction of a society year that is mandatory for young men and women after they have finished school. Such a service would not be limited to the Bundeswehr (Germany’s military forces), but would also take into account the care and social sectors as well as THW, fire brigades or clubs.”

Patrick Sensburg, President of the German Reserve Soldiers’ Association, also advocated for a universal reintroduction of military service for both men and women.

Objections to the budget

Of course, there are also those in Germany who oppose the military budget and increasing militarization. For instance, as part of the election campaign for the Student Parliament of Berlin Humboldt University, members and supporters of the International Youth and Student for Social Equality discussed with hundreds of students the immense rearmament of the Bundeswehr and the “war politics of Germany”. “Stop the war! €100 billion for education and health instead of for rearmament!” is their call. The group urges the danger of a third world war and the necessity of an international anti-war movement.

Gregor Link and Johannes Stern in their article dated 12 June on the International Committee of the Fourth International’s World Socialist Web Site mention what can be accomplished with the budget allocated to the army.

“The sum would be enough to support every family in Germany with €5,000 per child and at the same time pay out €360,000 in compensation for pain and suffering to the relatives of all those who officially died from coronavirus. Alternatively, the amount could be used over five years to double the number of nurses and pay their most senior colleagues a bonus of €1,400. A single billion would be enough to install air filters against the coronavirus in all classrooms.”

Even without being calculated such precise figures, it is reasonable to assume that many in Germany feel that allocating a budget of 100 billion dollars to the military means savings in other areas of their lives.

The end of “pacifism” for Germany?

Since the 2nd World War and the catastrophe brought to the entire world, one of the features that have characterized Germany’s foreign policy is its reluctance to invest in and use hard power. It can be said that especially former Chancellor Angela Merkel tried to be very careful in this regard. But Russia’s military operation seems to have changed the situation considerably.

Journalist Allan Little, in his article on the BBC on March 19, calls Germany’s foreign policy since World War II “guilt-ridden pacifism”. But he claims that Germany’s pacifist era is over with Russia’s campaign in Ukraine. Little recalls German Chancellor Olaf Scholz’s speech in the German parliament a few days after the launch of Russia’s campaign, when he considered it a “Zeitenwende” (turning point), and British Foreign Secretary Liz Truss’s statement that there had been a “paradigm shift” and that for them the “era of indifference” was over.

Little lists six turning points in European history and asserts that Russia’s campaign is the seventh:

1815: Congress of Vienna redraws map of Europe, restores balance of power and ushers in decades of peace after the upheaval of the Napoleonic wars

1848: A wave of liberal and democratic revolutions across Europe

1945: Yalta – great powers agree to partition Europe into Western and Soviet “spheres of influence”. Iron Curtain falls across the continent

According to Little, Russia has – with its operation in Ukraine – added the seventh point.