Either we all save ourselves or we will all disappear equally! That is the dilemma. 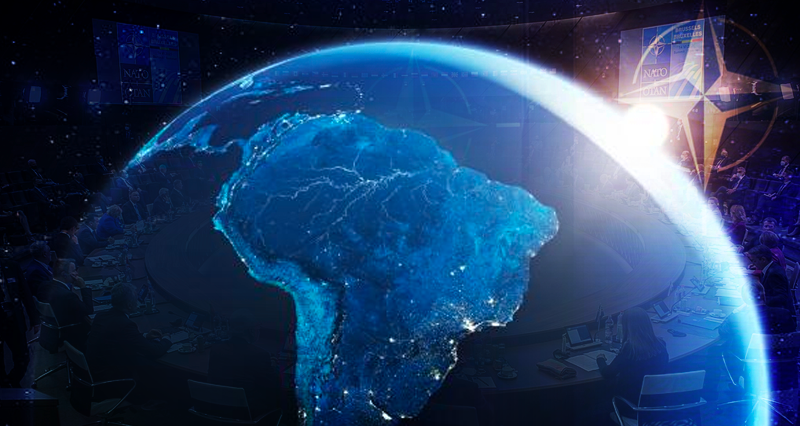 Following the recent strategy decided by NATO at its Madrid Summit, which establishes that China “challenges its interests, security and values”, and that Russia is “the most significant and direct threat” to its interests, the world is moving very quickly towards its partition in terms of the structure of the international system.

The event reaffirmed the values of NATO. One might ask, what that means, when it seems that they are referring to the traditional policy of the United States to endorse Russia an alleged interest in “establishing spheres of influence and direct control through coercion, subversion, aggression and annexation”. NATO adds that Russia “uses conventional, cybernetic and hybrid methods…”, as stated in a statement published on the website of that warmongering organization, the largest terrorist structure on the planet.

In the case of Latin America, it is very easy to verify the truth: how many Russian or Chinese military bases are there in the region? How many aircraft carriers or fleets of those countries roam our seas? How many presidents have Russia or China assassinated in Latin America and the Caribbean? How many invasions have they executed or propitiated?

They suppose the stupidity, ignorance and forgetfulness of our citizens to pretend that we do not know or forget our history. Or perhaps they believe that we are still Spanish, and that we have pantomime monarchs, governments that only serve as puppets for the amusement of their masters and presidents who sit at the table of the powerful to collect the crumbs that Washington throws when it finishes to eat?

The truth is that Europe is a continent militarily occupied by the United States, from where it plans and executes its global hegemonic project based on offensive actions against any part of the planet. In a recent article, the Spanish analyst Luis Gonzalo Segura explains it with certainty and precision:

“They tell us that Europeans and North Americans are partners, but there are unquestionable facts that dismantle this fallacy. Normally, 70,000 North American soldiers are deployed on European soil in military bases distributed throughout the geography of the Old Continent, a figure that currently rises to more than 100,000 troops. In addition, there is a multitude of US weapons in Europe, including weapons of mass destruction – not like the ones the United States claimed existed in Iraq, the real ones.

Now, having confirmed this fact, ask yourself: How many European military bases are there in the United States ? The answer is known to all: none.

Some might reply that there is an asymmetry in the association between Europeans and North Americans, but the truth is that what exists is an abnormality. An abnormality if we consider Europe and the European countries as sovereign and independent, but an absolute normality if we accept the reality: Europe is a territory militarily subjected to the United States”.

Viewing the situation from this perspective, we are moving towards an unprecedented international system, never before explained and unthinkable even in the most recent past. In an article in the Mexican newspaper La Jornada, the laureate American economist Joseph Stiglitz argues: “It seems that the United States has started a new cold war.”

But this one is unlike the one of the last century, in which the ideological element was the organizer of international relations. Stiglitz affirms that in the face of the American hypocrisy that supports its points of view in a supposed defense of democracy, the one of today “… makes one think that, at least in part, what is at stake here is global hegemony rather than a question of values”.

The avalanche of multilateral events in recent weeks such as the summits of the BRICS, the Americas, the G-7, NATO, the Saint Petersburg and Davos Forums, among others, show the intensity with which the main protagonists on the international stage are acting and the maelstrom of negotiations in which they are involved.

The unipolar versus the multipolar world

It is worth mentioning that the government of Venezuela has taken note of this situation, which is why President Nicolás Maduro has sought to broaden the country’s vision and space, assuming himself, together with Vice President Delcy Rodríguez, the personal responsibility to solve Venezuela’s problems in this world that is so chaotic and in full swing and where the empire intensifies its aggression, while struggling in a multisectoral crisis from which they visualize that they can only get out through war and a permanent conflict that ensures they increase their income through of its main industry: the production and sale of weapons.

Thus, we arrive at this original and strange situation framed in the possibility of that new cold war that Stiglitz speaks of. What is new is that bipolarity manifests itself differently. On the one hand, the western pole self-styled “international community” made up of 11% of the planet’s population, which works inward in unipolar terms with the United States acting hegemonically and having Europe, Australia, New Zealand and Japan as subordinates. obedient, even to the detriment of their own citizens.

The other pole, made up of the vast majority of humanity, has proposed to build a great multipolar environment in which various centers of world power can participate in a space of cooperation and aid that has already been made clear in the fight against the pandemic.

In this field of confrontations and definitions, the validity and persistence of an international law built after centuries of searching for peace on the planet is compared against the US proposal to establish “an international system based on rules” as a form of unilateral imposition of its imperial logic. At this point, it is no longer known what the role of the UN will be in the future. If it continues to exist, it will be necessary to define, under what conditions it will do so, when we observe that NATO has taken over the main multilateral organization on the planet.

The current situation is only comparable to the one that began to be experienced after the Nazi defeat in Stalingrad in February 1943, which made it possible to visualize that after the defeat of Germany and its allies, a new world would ensue and it had to be organized and structured.

But now the situation is different and much worse. The Tehran (November 28 to December 1, 1943), Yalta (February 4 to 11, 1945) and Potsdam (July 17 to August 2, 1945) conferences shaped the structure of the international system of postwar period. The ideological adversaries Joseph Stalin of the USSR, Winston Churchill of Great Britain and Franklin Roosevelt of the United States met there (Harry Truman in the latter because President Roosevelt had died in April of that year). It was about exterminating Nazism and around that goal, they had become allies.

At the beginning of the cold war of the 20th century, despite everything, in the face of the debacle that produced 100 million deaths, rationality and the desire for peace prevailed, even though it was impossible to produce ideological approachments. Of course everything changed, when only four days after the end of the Potsdam Conference, Truman (a president from the Democratic Party) rushed back to Washington to order the dropping of an atomic bomb on the defenseless Japanese city of Hiroshima. It became clear that for the United States, rationality had a limit if it threatened its hegemonic desires.

Curiously, one of the agreements of the Potsdam Conference, held two months after the end of the war and the surrender of Berlin, was the demilitarization and denazification of Germany, the same objective that Russia is now proposing when carrying out its special military operation in Ukraine. It is worth asking, why in 1945 was it valid and now, it is not? What has changed? Or rather, what hasn’t changed so that 77 years later, the objective is the same?

Today the situation is different, the irrationality that emerges – precisely – from the West’s support for the resurgence of Nazism and fascism as tools of hegemonic control of the planet prevails. They had already done it before by creating Al Qaeda in Afghanistan and the Islamic State in Iraq and Syria, but this time, it has a greater scope when the entire structure that orders the international system has been called into question.

Of course, Biden is not Roosevelt, Johnson is not Churchill, nor is Macron De Gaulle. Beyond ideological differences, one cannot fail to recognize that those were statesmen, while these of today are no more than clowns trying to stage a circus in which they intend to save themselves from the debacle. Subjecting their peoples to unspeakable difficulties just to apply sanctions to Russia that have been reversed in an unfavorable way for their promoters, can only come from small and mediocre minds that are hardly thinking about safeguarding peace and coexistence for all on the planet.

That size is the trance we are facing. But today, the world cannot evoke that supposition that it is possible that someone is capable of preserving himself, because now, either we are all saved or we will all disappear equally. Let each one do what corresponds to him.