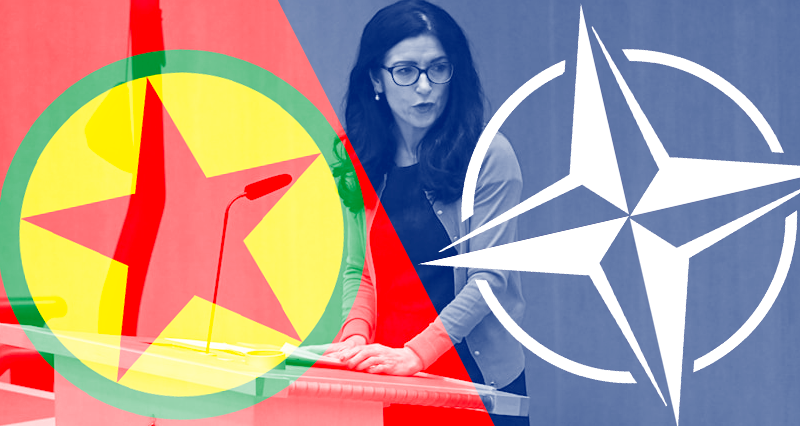 Things had gotten complicated in Sweden after Türkiye announced that it might veto Sweden and Finland’s admission to NATO because of their support for PKK and YPG. The press and parliament are demanding an explanation of the contents of the Kakabaveh-Social Democrats agreement, which was made behind closed doors. The cost of the ‘Kurdish/PKK/YPG card’ to Sweden is now being discussed in the press.

Sweden abandoned its policy of  “non-alignment in peacetime to remain neutral in wartime” in order to become a member of NATO. 16 NATO countries have arrived in Stockholm with warships, aircraft and submarines for a joint Baltic exercise (Baltops). 257-meter-long USS Kearsarge docked in Slussen. The people of Stockholm rushed to the harbor to see the ship. This time, the Prime Minister took C (Center Party) leader Annie Lööf with him to the ship to welcome the guests. They conducted joint exercises as they have been doing for years without Sweden being a NATO member, but the fate of Sweden’s application to membership of NATO is not yet clear. This is upsetting Swedish politicians.

Only a month ago, all of the parties supporting the no-confidence vote had followed S (Social Democrats) into the NATO process, encouraging Prime Minister Magdalena Andersson and giving her 100% support. Even after, the Swedish parliament voted “Yes to NATO” the Prime Minister and the leader of the main opposition party, Ulf Kristersson (M), gave a joint press conference and proudly announced that the decision to join NATO had united Sweden. Prime Minister Magdalena Andersson expressed her disappointment and said: “Given the elections in three months, and the crucial process for NATO membership, the no-confidence vote is utterly irresponsible. I consider that against the whole government, and if Johansson is impeached, I will resign.” With the Prime Minister’s challenge, the crisis moved to a new stage. While the gangs and street executions were to be discussed in the parliament, the incident turned into a situation that will deepen the NATO crisis that Sweden is going through.

The 175 members of the 349-member Swedish parliament can not only form the government, but can also overthrow it. The situation in today’s parliament and the number of deputies of the parties is deplorable! The opposition parties have a total of 174 votes and need only one vote to pass a no confidance vote or to overthrow the government. The ruling party, the Social Democrats, have 100 MPs, while the C (Center Party), V (Left Party) and MP (Periphery Party), which support them from the outside but always make their threat felt, have a total of 174 MPs. It’s a path to nowhere. There is only one “key vote”. This “key” belongs to the independent MP Amineh Kakabaveh.

Kakabaveh had also paved the way for the Social Democrats to power in November 2021 due to the parliamentary arithmetic. Now the government once again appealed to Amineh Kakabaveh’s “key vote” to save Morgan Johansson from the no-confidence vote.

But Kakabaveh, who knew the value of her vote, was well aware that Türkiye had put her name on the table during the NATO discussion. She was looking for a new bargain with the government.

The press began to publish one article after another criticizing the Social Democrats for making a binding agreement and concessions with Amineh Kakabaveh in order to secure her single vote to form a government in November 2021. The blockage of the NATO process was criticized not only for the inaccuracy of the agreement with Kakabaveh, but also for Sweden’s wrong approach to the Kurdish issue. Amineh Kakabaveh, who thinks that she may withdraw the deal with Social Democrats, in the face of the government’s statements like “we had already declared the PKK as terrorist organization” in order to soften Türkiye’s harsh stance, announced that she may use her vote to bring down the government in the spring budget talks. Amineh Kakabaveh was dissatisfied with the government’s attempt to find a middle ground after Türkiye’s stance and began frequently to express that she will not support the government, portraying this situation as a failure to fulfill the agreement between them.

The Social Democrats’ reassurance is insufficient for Kakabaveh

Kenneth G. Forslund, spokesman of the Social Democrats’ Foreign Affairs Committee, said that Kakabaveh had not broken the agreement, but had taken a stand because not all of the agreement’s promises had been fulfilled, but that she is in favor of resolving the problems. Forslund added that the Social Democrats have met with the Syrian opposition, and even arranged for them to hold a meeting in Sweden in accordance with the agreement with Kakabaveh. Forslund said that they will reach a consensus with Kakabaveh, but that it would be difficult for them to agree on the issue of Kurdish refugees, who have been labeled as “terrorists” by SÄPO and the Immigration Department and denied residence permits and citizenship, because neither the government nor the Social Democrats can intervene in the decisions of the institutions.

In short, a political crisis has been added to the trauma caused by Türkiye’s stance. Once again, all eyes were on Kakabaveh, because both the government and the opposition were desperate for her vote.

Looking for an opportunity to turn the situation to her favor, Amineh Kakabaveh announced that she would not vote against Morgan Johansson in the no-confidence vote if the Social Democrats publicly declare their commitment to the agreement they made in November 2021. Thereupon, on behalf of the Social Democrats, party secretary Tobias Baudin made the expected statement.

According to the statement, party secretary Tobias Baudin had made an agreement with Amineh Kakabaveh on behalf of the Social Democrats in return for her support to Magdalena Andersson’s government in November 2021. The Social Democrats promised to deepen relations with the PYD in northern Syria. It was emphasized that it is unacceptable that “freedom fighters” who fight in the ranks of the YPG/YPJ or the PYD and sympathize with them are labeled as terrorists by “some actor states”. The agreement also included that the Social Democrats would demand the release of the president of HDP (the party of PKK in Türkiye), Selahattin Demirtaş, who has been in prison for more than 5 years.

Kakabaveh, having relieved to have got what she wanted, took the floor, and delivered a long and completely anti-Türkiye/anti-Erdogan speech, just as she had done at the formation of the government in November. Kakabaveh, praising Justice Minister Morgan Johansson, indicated that she would vote against the no-confidence vote. Criticizing the government’s efforts to find an agreement with Ankara on NATO, “The decisions of the Swedish Parliament are taken here, not in Ankara,” she said. She praised YPG and Selahattin Demirtaş. She claimed that Erdogan used chemical weapons against Kurds during military operations.

Kakabaveh said: “All parties in the parliament support the independence fighters fighting for human rights. The Social Democrats and I share the same views on self-government in Rojava. I trust that the Social Democrats will continue to defend these ideas. The freedom fighters of the YPG/YPJ, who are fighting against Daesh and saving the world from terrorism, deserve every support. This also applies to Selahattin Demirtaş. All political prisoners must be released.”

Throughout her speech, which resembled a propagandist speech, Kakabaveh criticized Türkiye but this time neither Prime Minister Magdalena Andersson nor the other ministers cried. The prime minister and the foreign minister did not show any signs of approval of the speech; on the contrary, they listened to Kakabaveh anxiously as if to say “you are destroying us with every word” often averting their eyes. Defense Minister Hultqvist, on the other hand, never looked up from his desk, scribbling on the papers in front of him. When Kakabaveh finished her speech, she did not receive the applause she had hoped for, with only a few people in the 349-member parliament applauding.

Who won the no-confidence vote?

Thanks to Kakabaveh’s vote, the government did not have to resign, but the government’s relation with the PKK was once again revealed. After the no-confidence vote, Kakabaveh announced that she did not vote against Justice Minister Morgan Johansson, saying “the Social Democrats are loyal to our agreement”. Besides, ”Unfortunately, I don’t have any influence in the NATO negotiations with Türkiye,” she said, indicating her desire to be part of the negotiations.

In a press conference immediately after the no-confidence vote, Magdalena Andersson reiterated that despite the Social Democrats’ promise to support YPG/YPJ, they did not compromise anything for Kakabaveh. When asked by journalists if the agreement with Kakabaveh could cause problems in the negotiations with Türkiye, Prime Minister Andersson gave a vague answer: “This is an agreement between the Social Democrats and Kakabaveh, it has nothing to do with the Sweden’s NATO membership.” She could not also explain how the agreement with Kakabaveh would be implemented.

Prime Minister Magdalena Andersson also opened a new “legal and ethical” debate by stating that the Social Democratic Party, not the government, made the agreement. Does a party’s agreement with a MP to form a government legally bind the government or not? Is it ethical to give in to the demands of an MP until you form the government and then say “It was not us who made this agreement, it was the party”?

In an article by Halil Karaveli in Svenska Dagbladet, one of Sweden’s prominent newspapers, it was emphasized that after Social Democrats confirmation – showing that the Swedish government does not intend to meet Türkiye’s demands – that they had made an agreement with Amineh Kakabaveh, Türkiye would complicate Sweden’s application process for NATO membership.

Kakabaveh said that the agreement in November 2021 includes deepening relations with PYD, as well as to help women, Kurds and other organizations in northern Syria, and that the Swedish Foreign Ministry would also voice its demand for the release of Selahattin Demirtaş.