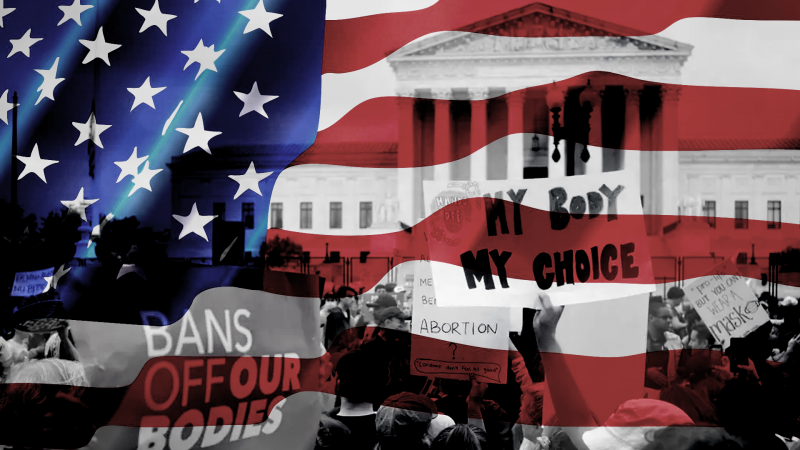 In the United States, the leak of a draft Supreme Court decision to revoke the right to abortion, known as “Roe v. Wade” 1973 decision, has brought the credibility of the country’s highest judicial body into question. It is known that of the 9 justices of the Supreme Court, 6 were appointed by a Republican president, and a Democratic president appointed 3. Four of the other Republican-appointed judges, along with Judge Alito, who penned the draft, are allegedly behind this decision.

It is expected that an official decision will be published before the court’s current term ends in late June or early July. Until then, the draft text can be negotiated and Justices could also change their positions as the draft circulates. If Roe v. Wade is overturned, abortion in the United States may cease to be a constitutional right and the matter of abortion rights would fall to individual states to determine. That would almost certainly lead to complete rollback across more than 22 states.

In April, Politico had leaked a draft opinion that the conservative majority of the US Supreme Court has ready to suggest reversing Roe v. Wade, a historical decision protecting women’s right to have abortions without government restrictions. Senate Majority Leader Chuck Schumer, a Democrat, said the Supreme Court’s overturning of the Roe case would be “one of the most damaging decisions in modern history.” In response, Senate Minority Leader Republican Mitch McConnell took a tit-for-tat, calling the leak of the draft a “shocking breach and an attack on the independence of the Supreme Court” and arguing that the “leak” is Democrats putting pressure on the Supreme Court to try to undermine the independence of the American judiciary.

The credibility of the court is questioned

In the recent history of the Supreme Court, which prides itself on keeping its internal deliberations confidential, no draft resolution had yet been made public while the case is pending. With the leak, the reliability of the Supreme Court and judges, the country’s highest judicial body, is also brought into question. Newspapers went to print with headlines like “leaky Supreme Court”. Legal experts said the leak is proof that the Supreme Court isn’t all that different from other Washington institutions.

To be elected as a judge, it is sufficient to be nominated by the President of the US and to get Senate approval after detailed Senate inquiry processes. According to the constitution, these 9 judges remain in office until they die or retire of their own accord. Although it is known that the appointment of judges is purely political due to this election process in which party ideologies are dominant, this fact has come to light with the leak—executive power stands above judicial power in US. So much so that, judges are appointed to the court in line with their ideological attitudes and views, which divides the American people into conservatives and liberals. This distinction becomes even more prominent in topics such as racial and religious issues, abortion and gay marriage. With the appointments made by Trump, a conservative majority was formed in the court and the topics that were on the agenda of the conservatives began to come to the court’s agenda as well. Now, the bias and credibility of the Supreme Court, which is expected to be an impartial body, is being discussed. Rival factions leak sensitive information in hopes of gaining political advantage. Speaking to the NYT, Sherry F. Colb, a law professor at Cornell, commented, “The court is now no better than other institutions of government.”

In the United States, the controversy over the right to abortion has a long history and is still difficult to resolve. Today, the leak of this draft not only exposes the huge differences within the Supreme Court, but also brings the fragmentation of American society to the surface again. The escalating differences among politicians have deepened the estrangement between people of different parties, resulting in “group differentiation”, which in turn makes it difficult for dissidents to compromise with each other.

They made abortion a topic for elections

On the other hand, with the leaking of the draft, abortion, which has been one of the culturally controversial issues in the US for years, came to the fore in the country. Last month, more than 300 protests were held across the country in defense of the right to abortion, particularly in cities such as New York, Washington, Los Angeles, Austin and Chicago. Moreover, the issue of abortion may become one of the important agendas of the midterm elections to be held in November 2022. Democrats are trying to boost their support by promising to protect women’s right to abortion before the 2022 midterm elections. Democrats say they will pass the right to abortion into law if they win a majority in Congress this election. For this, they need 10 seats. In his interview on the issue, President Biden said that he predicted a “mini-revolution” in November’s midterm elections if the Supreme Court overturns the decision. He also called for votes. According to a Kaiser Family Foundation survey, over half of Democratic voters said a reversal would motivate them more to vote in the midterm elections, while 73 percent of Republican voters said a reversal would make no difference in their motivation.

The issue of abortion has become a material of political division in the country and people are deeply disappointed and helpless about the deterioration of the political environment in the United States. It is expected that the split between Republicans and Democrats during the election process will become more evident through the abortion debate. While more than 20 states are attempting to ban abortion, it is stated that some states will revise the law and some will make it legal. In states that have legitimated abortion, it is thought that there will be a backlog in the health system. Women who wish to have an abortion from states that are prohibited will apply to other states. However, this will be a serious disadvantage for women who will not be able to cover their travel expenses because the distance between these states is very long. It is estimated that a significant portion of the disadvantaged women will be black and Latino people. In addition, some Republican states will seek to prohibit women from having abortions in other states. Just as women are deprived of their right to abortion, their right to travel may also be taken away.

In summary, this leak has caused another blow to the US system, which is trying to fortify its own people over the rhetoric of “democracy” in the face of failures at home and abroad. Although the Democrats try to turn this development in their favor in the short term, it can be predicted that the people’s trust in many institutions, especially the law, will decrease in the medium and long term. Meanwhile, the infighting between the two parties in the judicial system also marks a major step backward in the separation of powers in the United States.