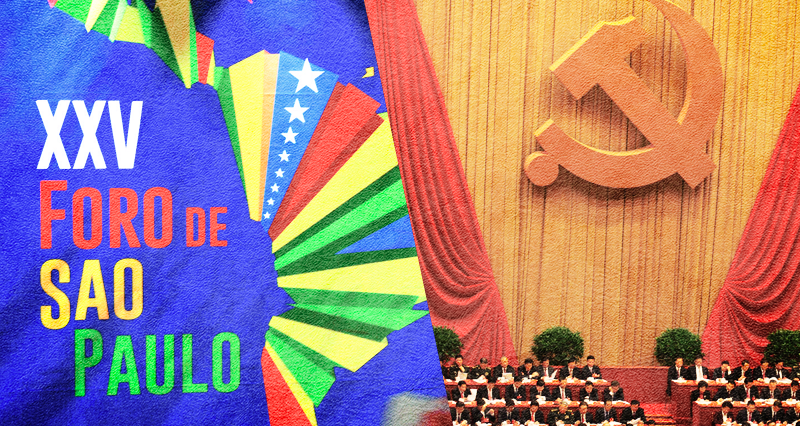 Remarks held at the meeting in the second cycle of debates between the member parties of the Sao Paulo Forum and the Communist Party of China, on June 14, 2022.

Dear friends of the Communist Party of China,

Dear friends of the political parties united in the Sao Paulo Forum,

Today we commemorate the 94th anniversary of the birth of one of the greatest Latin Americans in history: Comandante Ernesto Che Guevara. With the ever-present memory of his life and work, I am grateful for the opportunity given to me to offer some opinions and present some ideas regarding this meeting and its importance for Latin America and the Caribbean.

These meetings pave the way to achieve the main objective that the political parties of Latin America and the Communist Party of China should have: to get to know each other.

More than being different countries, Latin American and Caribbean nations on the one side and China on the other make up two different civilizations. Therefore, our ties, more than a simple international relationship, are the expression of an intercivilizational nexus. Here we can diagnose the complexity of these relations. If we do not understand and accept these circumstances, it will be difficult to establish mutually advantageous bonds of cooperation and help.

Chinese tradition establishes that whoever establishes ties of any kind is considered a friend. For us it is different: friendship is a stronger bond, which is established from shared identities, values and principles. There an initial difference arises that we must overcome through dialogue and mutual understanding. In the past, China has been a friend of Latin American leaders who have persecuted, assassinated and disappeared leaders and political activists of some of the parties present at this meeting.

Only knowledge, exchange and mutual support can accelerate the rapprochement that has occurred in recent years. Here are the best friends of China in Latin America and the Caribbean, the most illustrious and advanced representatives of the best of the societies of our countries. Those who are here do not intend to approach China from petty commercial or profit interest. Their interest lies in exchange and cooperation that benefit the peoples of the region.

In the long, millennial history of China, Latin America and the Caribbean represents its most recent relationship if we compare it with any other continent on the planet. Although there are authors like the British Gavin Menzies who assures that the Chinese fleet under the command of Admiral Zheng He arrived in what would later be called America at the beginning of the fifteenth century, long before Christopher Columbus, such information has not been verified. What is proven is that the first Chinese immigrants arrived in the region around 1565 through Acapulco in Mexico. Subsequently, they continued to arrive in isolation in Peru, at the beginning of the 17th century, and in Brazil during the following century, and it was in the 19th century that a continuous migratory current was established, initially to Trinidad and Tobago and Brazil.

But, beyond that, it was in the 20th century, after the creation of New China in 1949, when interest in getting closer and getting to know each other began to awaken. It took ten years for the triumph of the Cuban Revolution to allow a Latin American and Caribbean country to establish relations with China for the first time, and another 11 years for Salvador Allende’s Chile to become the first country of the American “mainland” and second in the entire region to formalize diplomatic ties with China in 1971.

Think about what that means. In Chinese history of 5 millennia, just 5 decades ago; China only had relations with two countries in the region. So it’s only natural that we don’t know each other very well. It was those two countries: Cuba and Chile, with brave leaders – Fidel Castro and Salvador Allende, both with strong revolutionary convictions who dared to disobey the imperial mandate and established relations with China. It must be said and repeated: they were not Batista’s Cuba or Pinochet’s Chile, they were Fidel’s Cuba and Allende’s Chile. Perhaps that is not important for China, because its foreign policy is State policy, but for us it is, because these leaders shape our identity and – why not say it –also partly our culture. There is a difference that we must know and learn in order to understand and accept ourselves better.

That same year 1971, China finally regained its seat in the UN and the Latin American oligarchies were authorized by the US empire to approach China. Starting this year of 2022 and during the current decade, most Latin American countries will commemorate 50 years of the establishment of diplomatic ties with China. In that eighth decade of the last century, the independence of our Caribbean brothers and sisters also began to be massively verified, and with it, a still unfinished process of establishing their ties with China.

To the shame of Latin America, we are the continent with the largest number of countries that recognize Taiwan, but I can say that I do not believe that there is any member party of the Sao Paulo Forum that shares and accepts that policy. In this meeting there are parties from countries that have no relationship with China, but they are doing their best to reverse this illegal and unjust situation because, as I said before, here are China’s best friends in the region.

At the end of the same decade, the reform and opening policy began in China. The objective was clear: China had to get out of the slow pace that – with obvious financial and technological limitations – prevented a more accelerated advance of its structural transformation on the road to socialism. Such a decision caused relevant changes, which international politics and the Ministry of Foreign Affairs were not unaware of. In fact, the Foreign Ministry was transformed into the Ministry of Foreign Trade and the embassies into commercial offices.

China’s contacts with the societies and peoples of the region were minimal. Diplomats were demanded and valued for their ability to attract investment and trade. But our Chinese friends should know that entrepreneurs in Latin America (with rare exceptions), unlike China, do not have national or patriotic interests, they only care about profit and profit for themselves and their families. The great profits that a successful trade relationship with China brings are neither received nor enjoyed by the people. Here’s another difference.

This is what is changing since the arrival of President Xi Jinping to the General Secretary of the Communist Party of China in 2012 and to the highest magistracy of the State in 2013 and it is what we all celebrate.

I dare to say that none of the participants in this meeting is against China strengthening and increasing its trade, financial and investment links with the elites of our region. However, I believe that these relations should be extended to the academic, cultural, social and other spheres, aimed at strengthening the ties between peoples, which is the only thing that projects true strength and makes relations between friendly countries irreversible.

Therefore, this meeting is very important. It is part of the mutual effort to continue advancing on the path of solidifying friendship and cooperation that will result in better living conditions for our peoples, as well as invigorating and strengthening the shared interest and mutual effort so that peace, democracy and a development that covers all of humanity like a great umbrella reigns on Earth.

Greetings, dear friends, and may the friendship between the Sao Paulo Forum and the Communist Party of China be strengthened.

Thank you very much.