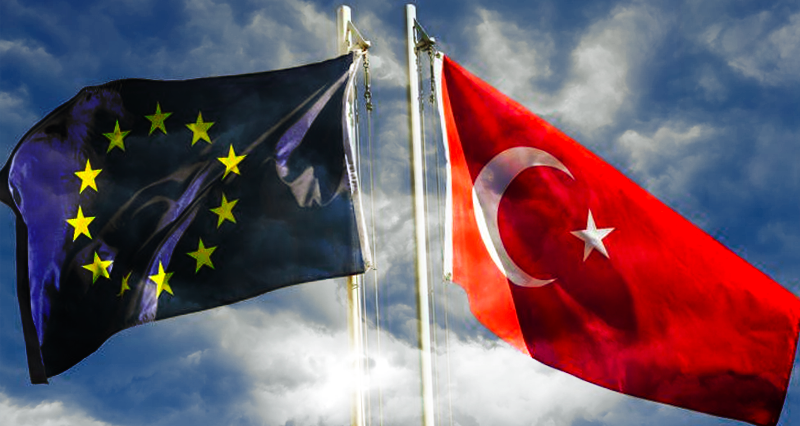 The European Parliament has once again confirmed its interventionist and conflictive stance towards Türkiye on June 7. On that day, the EP has approved the 2021 Commission Report on Turkey with 448 votes in favor, 67 against and 107 abstentions.

The EP concludes in its document that there is no room to reopen the negotiations on Turkey’s membership, given the “persistent gap between Turkey and the EU” and the “lack of political will” on Ankara’s side to “carry out the necessary reforms”.

The parliament reiterates its “firm conviction” of Turkey’s strategic relevance in political, economic and foreign policy terms, and “notes a slight improvement in overall EU-Turkey relations over the past year”.

Still, the EP raises comprehensive demands on both Turkey’s domestic politics as well as its international relations.

Under this chapter, the EP demands from Turkey the implementation of the ECHR’s decision concerning Osman Kavala and “condemns and regrets” the country’s withdrawal from the Istanbul Convention on preventing and combating violence against women.

Turkish regulations concerning freedom of assembly, measures regarding LGBTI students, press members, high numbers of conviction because of insulting the president are also criticized by the EP declaration, which also “strongly

condemns the dismissals and forced removals of a large number of Turkish judges and prosecutors”.

As in every similar text, the European Parliament also deems great importance to the status of those it considers minorities: while for the Greek Orthodox population the application of the recommendations of the Venice Commission is demanded, for the Alevi population the EP wants the “public recognition of the identity and the legal status and funding of the Cemevi”.

The report deems a great part to what is called “attacks against opposition parties, particularly the HDO and others, including the Republican People’s Party (CHP)”. The EP criticizes the removal of HDP mayors, the detention of HDP members, warns that “banning the party would be a serious political mistake”, remains “deeply concerned by the situation of the Kurdish people in the country”  and stresses the urgency of resuming a credible political process involving all relevant parties and democratic forces and leading to a peaceful settlement of the Kurdish issue”.

The chapter on Turkish foreign policy starts with an acknowledgement: Ankara’s “clear support for the independence, sovereignty and territorial integrity of Ukraine is appreciated”, as well as Turkey’s “firm alignment with NATO and EU”. Positively noted are Ankara’s application of the 10936 Montreux Convention, financial and humanitarian assistance to Ukraine and disposition to act as a mediator.

Still, the EP “expects” Turkey to avoid becoming a “safe haven for Russian capital and investments” and “encourages Turkey to close its airspace to Russian aircraft.”

The EP “calls on the Turkish Government to handle Finland’s and Sweden’s NATO membership applications in good faith, to engage constructively in efforts to solve possible outstanding issues in line with EU values and legal requirements and to refrain from exerting any undue pressure in this process”.

In terms of the Common Foreign and Security Policy, the EP states that Turkey is the country least aligned with the EU, achieving a rate of 14%, and “has clashed with the EU’s priorities in recent years (…) as regards the Caucasus, Syria, Libya and Iraq”.

Bu the recent rapprochement between Armenia and Turkey is considered a “highly positive development”, while the EP also “welcomes Turkey’s diplomatic efforts to normalize relations with various countries in the Middle East, especially Israel.”

“New spike” of tensions in the Eastern Mediterranean

The parliament criticizes recent statements by Turkish officials disputing Greece’s sovereignty over some of its islands” as “counterproductive”, “condemns harassment by Turkish warships of research vessels performing surveys within the EEZ delimitated by the Republic of Cyprus” and Turkey’s “violation of Greek airspace”.

The EP “expresses its total solidarity with Greece and the Republic of Cyprus;

reaffirms the right of the Republic of Cyprus to enter into bilateral agreements on its EEZ and to explore and exploit its natural resources in full compliance with international law”.

Concerning Cyprus, the European Parliament repeats its known position and “calls on Turkey to abandon this unacceptable proposal for a two-state solution and to withdraw its troops from Cyprus”.

Turkish military interventions in Syria are “condemned” as violation of international law. The EP specifically “condemns the illegitimate transfer of Syrian refugees to northern Syria in order to reshape the demographic character of a mainly Kurdish area in Syria”, indicating its policy to establish autonomous regions within this country.

In Libya, Turkey is called “to commit to the peaceful solution under UN auspices and adhere to UN arms embargo”, while the MoU between the Libyan and Turkish governments on delimitation of maritime zones and on security and military cooperation “is condemned” again.

The European Parliament is not very hopeful for the future of EU-Turkey relations. As mentioned above, the reopening of accession negotiations is out of question given the tensions between Brussels and Ankara.

The resolution proposes to place “normative issues” at the center of relations, referring to EU interventions into Turkish domestic policy and lawfare.

The parliament proposes to further financially support what it considers pro-democracy forces in Turkey. Besides calling on the European institutions to further develop approaches and avoid conflictive language towards Turkey, the parliament calls on the European External Action Service “to intensify transatlantic dialogue and cooperation with the Biden administration with regard to relations with Turkey”.

Highly concerned with the situation of the Turkish economy, the EP notes the Commission’s creation of a Turkey investment platform and demands its full alignment with foreign policy.

In sum, the European Parliament in its majority confirms the standing EU perception of Turkey as a necessary partner with adversarial interests.