Via Ukraine to Syria: Washington’s MANPAD and Javelin end up in the hands of PKK/YPG 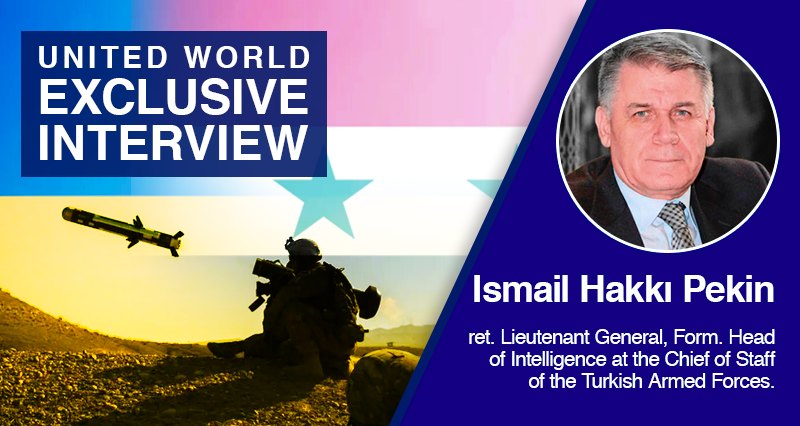 “These are weapons of a crucial kind. No arms company will sell these weapons without the knowledge of the US government and intelligence service. Can these weapons be used against Turkey? Of course. They can use them to hit Turkey’s prestige in the world by damaging the Turkish Armed Forces. They can even add psychological operations and disinformation to this.”

On 23 May, Turkish President Recep Tayyip Erdogan announced that Turkey would launch a cross-border operation against PKK/YPG . “Like I always say, we’ll come down on them suddenly one night” said President Erdogan “And we must.” The President of Turkey also criticised the US and said: “If the U.S. is not fulfilling its duty in combating terror, what will we do? We will take care of ourselves,” President Erdogan stated that the of the operation is to create 30km “safe zone” in Syria.

We interviewed Ismail Hakkı Pekin, retired Lieutenant-General and former Head of Military Intelligence at the Turkish Armed Forces’ Chief of Staff, on the aim and scope of the possible operation, US’ weapons (MANPAD and Javelin) in the hand of PKK/YPG, and the attitude of Syria, Iran, Russia and the US toward the operation.

The aim of the operation: Creating an undivided Safe Zone

In the official statements made by the President of Turkey, Recep Tayyip Erdogan, it is stated that a military operation will be carried out against the terrorist organization PKK/YPG, aimed to take control of a region at a depth of 30 km. What will be the purpose and scope of this operation? If this is not a decisive operation (considering the 30 km limit), is it a part of a larger-scale strategy?

The operation in question is a part of a larger-scale strategy. Considering the operations Euphrates Shield, Olive Branch and Peace Spring, Turkey’s aim was to disperse the PKK/YPG corridor that was being tried to be created in the northern part of Syria. With these three operations, Turkey prevented the territorial unity of the corridor. Before these operations, the President of the Republic of Turkey, Mr Recep Tayyip Erdoğan, declared that the aim of the operations was to create a 911-kilometre wide and 30-kilometre deep safe zone along the Turkey-Syria border. In this way, Turkey would eliminate the terrorist elements on its borders and prevented terrorist infiltrations into Turkey from the borders. And this has been achieved. Turkey is doing the same thing in Iraq and will continue to do so. So, the operation in question is a new step towards the aim I have described.

We talked about the fact that Turkey’s previous operations reached the goal, but one thing should be known: There are still terrorist elements in certain parts of the safe zone that Turkey wants to create. For example, in the Afrin Operation, Russia did not allow Turkey to enter Tel Rifaat. As a result, Tel Rifaat remained like an island in the middle of the Turkish troops. Tel Rifaat is a region that has an airport and an important location for the north of Aleppo and the M4 highway. Turkey could not enter Manbij during the Peace Spring Operation too. Manbij is now under Russian control. The importance of Manbij comes from being a place with drinking water. Just north of Manbij is Ayn al-Arab. The Turkish Armed Forces did not enter that region either. Currently, Turkey is conducting joint patrols with the Russians there. Looking a little further to the north, the Turkish Armed Forces entered the area between Tel Abyad and Rasulayn, but not Qamishli. To summarize; Turkey’s aim is to unite all these areas. According to the President’s statement, Turkey first wants to take Tel Rifaat and then Manbij under control. After these, an operation towards Ayn al-Arab is possible as well.

Alliance with Syria, Russia and Iran against the threat in the south of the 30-km

With this operation, Turkey will drive the terrorists to the south. But the threat will not be over. The US is training its intended PKK-YPG garrison state in the south. The USA will continue to do that in the south of the Raqqa-Haseki line. The south of this line is outside the 30-km deep safe zone. In other words, Turkey’s operation does not aim to control this region. But what about the US-backed terrorist elements in the south of the safe zone? Turkey will eventually have to intervene here as well. For this, it is absolutely necessary to make an alliance with Syria, Russia and Iran.

Distrust within the quartet of Turkey-Russia-Syria-Iran

There is some distrust between 4 countries (Turkey, Syria, Iran and Russia). Turkey said to Syria and Russia: “Do not attack Idlib. We will take weapons in the hands of the groups here and we will clear Idlib from terrorists.” However, Turkey could not do that. On the other hand, the Russians would neutralize the terrorists (PKK/YPG) in the areas under their control and send them to the south of a depth of 30 km, but they could not do that either. Russia shows a certain tolerance to the PKK/YPG in order not to lose them to the USA.

Russia’s concern about Turkey’s steps is that the balance may deteriorate to the detriment of the Syrian state, and therefore Russia. Iran’s concerns are similar. Iran has military bases in important regions such as Damascus.

Cooperation against the US

But the main concern should be the USA’s goals. The USA wants states like Lebanon in the region. What kind of state? An ungovernable state which is divided into many ethnic and sectarian parts and called the “Failed State”. This is exactly what the US did in Iraq. For instance; in the last 8 months, neither the president could be elected nor the cabinet could be formed in Iraq.

The USA is trying to destroy nation-states. For this reason, Turkey, Iraq, Syria, Russia and Iran should cooperate. In this way, the problems can be solved.

US MANPAD and Javelin are at the hands of PKK/YPG

Recently, you have warned the public that the Manpad and javelin weapons, that the USA gave to Ukraine, fell into the hands of the PKK/YPG. Is the US doing this on purpose? What is the probability that these weapons will be used against the Turkish Armed Forces?

The US does this partly on purpose, partly unknowingly. The US has a very bad track record in this regard. At the time of the Gulf Crisis, the US had given weapons to many groups, and as a result, around 150,000 US M16s were lost. It seems that the US delivers the weapons, which it cannot send directly to Ukraine, under the guise of aid. There is a huge market for this. For example, a $250,000 gun is sold for $15,000 in this market. There are people who make big money out of this business. It is likely that we will read the news “America’s lost weapons” in the coming period.

“The US has a very bad history of arms smuggle”

Do we know how these weapons were transmitted from Ukraine to the PKK/YPG?

There are many arms smugglers in the Middle East, and especially in Dubai. There are many ways to transmit the weapons: With trucks, under the name of “aid material” or “commercial activity”. The key here is not to transmit, but to find the weapon. For example, how strict is the control in the Black Sea right now? Do we control all merchant ships in the Black Sea? The weapon can be transmitted over the Black Sea, as well as via Iran or the Middle East. So the transmission is the easy part of the business.

Sometimes, the USA provides the weapons, on purpose, in order to cause conflicts and turmoil. Former US vice president Oliver North was selling weapons to Iran with at 2-3 times cheaper price, despite the embargo. The arms dealers took the standard price of the arms, and the US took the remaining money and gave it to the Contras in Nicaragua. The USA does this all the time. The US has a very bad track record in this regard.

These are critical weapons. No arms company will sell these weapons without the knowledge of the US government and intelligence service.

Can these weapons be used against Turkey? Of course. They can use them to hit Turkey’s prestige in the world by damaging the Turkish Armed Forces. They can even add psychological operations and disinformation to this.

Attitudes of Syria, Iran, Russia and the US towards the possible operation

How would Syria, Iran, Russia and the USA react to a possible operation of the Turkish Armed Forces? It is known that Turkey is engaged in talks with Russia. The US has declared that it will condemn the operation. There seems to be no clarity on Syria and Iran. What would you say about this?

There will be a meeting in Astana in the coming days. Lavrov suggested solving the issue in Astana. Therefore, the operation may take place after the Astana meeting. Russia is acting cautiously. Russia’s concern, as I have already mentioned, is that the current balance may deteriorate to the detriment of the Syrian state. Similar concerns apply to Iran. Syria is also worried about the deterioration of the balance and even clearly opposes the operation.

Syria is also fighting the PKK/YPG, but is also unsure and doubtful of Turkey’s aims. Syria is concerned about Turkey’s statements on the Syrian National Army. They also have doubts as to whether Turkey’s goal is to reach Aleppo.

As for the USA: Currently, there is no issue that directly concerns the USA. Neither Tel Rifaat nor Manbij. The USA’s fear is that if something happens to the PKK/YPG garrison statelet, which the US itself has trained and armed. However that only applies to this phase of the operation. If Turkey launches an operation in the region, where the garrison statelet is based, then the US will oppose. For example, if the Turkish Armed Forces moves towards Ayn El Arab or Qamishli, will face the US. There are US bases and oil in Qamishli, and it is also an important region in terms of M4 highway, that is, in terms of supply routes.