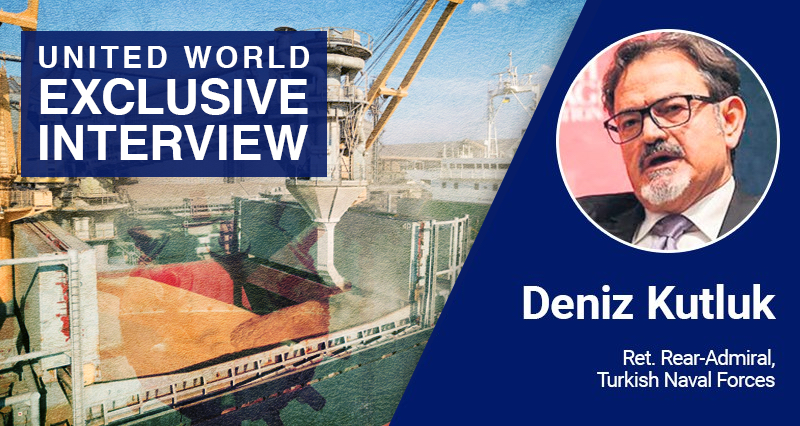 After Russia’s operation against Ukraine, Ukraine laid mines in the region around Odessa and Mykolaiv ports. The Sea of Azov came under Russian control. Thus, the grain export of Ukraine, most of which are done from these ports (90% of the total), came to a standstill. Ukraine ranks second in the world in grain production after the USA. Ukraine exports 75% of its grain production. The said export constitutes 20% of the total export of Ukraine. The problem concerns both the economy of Ukraine and the countries importing grain from this country; the states and institutions dealing with the issue have been looking for a solution for a while.

One of the most recent attempts was that of Turkey’s. Turkey has taken important steps to ensure the export of grain (which is worth 10 billion dollars and has a weight of 20 million tons) left idle in silos. It is expected that the subject will be addressed during the visit of Russian Foreign Minister Sergey Lavrov to Turkey on 8 June.

We interviewed Ali Deniz Kutluk, retired Rear Admiral in the Turkish Naval Forces, who has held senior positions in NATO for many years, on his evaluations concerning the issue.

Turkish Foreign Minister Mevlüt Çavuşoğlu said in his latest statement, “We play a role in the export of Ukrainian grain to the world via Odessa.” How effective is Turkey in this regard?

According to the agreement reached with Lavrov, Turkey will take a role in minesweeping. Minesweeping will be carried out jointly. There is no difficulty in minesweeping anyway. Turkey, Romania, Russia, Bulgaria; they all have the ability of minesweeping. The issue here is rather Ukraine’s consent to minesweeping. Ukraine’s purpose, in laying mines, was to prevent attacks from the sea. If the attacking force attempts to clear the mines, they thought, they would shoot those ships off the coast. The question now is whether Ukraine has changed its mind. Legally, the permission of Ukraine, which is the port state, is required for merchant ships to leave the port. In addition, Ukraine must ensure the safe passage of ships through its territorial waters. For this, Ukraine has to report the mined areas to the other countries.

The Corfu Channel case presents a good guidance in that context. In sum, there are two different ways. One is that Ukraine provides a safe channel for ships to pass through the mine-free zone. The second is that Ukraine gives consent to the clearing of mines by ships from other counties. Ukraine will likely not be so happy with Russian minesweepers because they suspect that Russian ships will operate for purposes other than minesweeping. In this case, Turkish, Romanian or Bulgarian ships can do this job. These coastal states have enough minesweepers.

As for the Sea of Azov: there is Russian wheat waiting to be exported from Mariupol. There may also be Ukrainian wheat in the same region. 20 million tons of wheat is mentioned. This figure is as much as Turkey’s annual production and 90-95% of its annual consumption. With the seizure of Mariupol by Russia, both coasts of the Sea of Azov came under Russian control. Russia has committed to open a 2-mile wide canal in this region as a security measure. Therefore, there is no difficulty for ships stuck in this region. There are no obstacles for the silos where the wheat produced in Donbass are stocked to pass through the Strait of Kerch to the Black Sea via the Sea of Azov, and then pass through the Turkish Straits (Istanbul, Marmara and Çanakkale Straits).

Does this also mean that Ukrainian-produced grain can also be exported via the Sea of Azov without clearing mines in the Donbass region? Is that correct?

These two sets of ports need to be considered separately. The former has a mine threat, but the latter does not. The latter became operational as of last week, with the Russians giving the green light. Things are going well here. Now, it is aimed to make the ports in Odessa and Mykolaiv operational as well. I explained in your first question how this would be possible.

Trying to make it difficult for Ukraine to export grain, Russia was aiming to wear Ukraine out economically. In the new situation, is Russia changing its policy by giving the green light to Ukraine on this issue? If so, what is the reason behind it?

Judging by what Lavrov said – and Çavuşoğlu confirmed Lavrov’s words – Russia does not set limits on the grain export in question. Russia’s grain exports are also large. Turkey imports most important amount of wheat from Russia. There are other countries that import a significant amount from Russia. Turkey is in the role of a safe moderator on this issue; it is equidistant from both sides and has common interests with both sides. Besides, Turkey is a braking force before NATO’s intervenes with fait accompli. Please note that other countries cannot even negotiate with Russia. Without negotiations, the war goes on forever. It is necessary to keep the channels of peace open, while the war is keep going. The West does not do such a thing. Therefore, there is only Turkey left that can do this. Actually, the role of France is not bad either. Macron has direct contact with Putin.

Is there no alternative to 20 million tons of wheat in the world? It is not like that… The US production can fill the gap. But the problem also has a political dimension.

I made a statement to a French channel 10 days ago. One of the questions was about France’s desire to send ships to the region for minesweeping. I said that this is not needed. Secondly, I stated that international law and the Montreux Convention do not allow such an action by France.

Admiral Stavridis’ proposal should be rejected

A week ago Admiral Stavridis said, “Let’s bring warships to the region, Russia cannot take a step against us, and if it does, we will destroy Russia.” There is no need for such an escort ship. There is no threat to merchant ships. The merchant ships travel in safety on the open sea. The remaining part of the Black Sea, excluding territorial waters, is the open sea. Therefore, there is nothing that requires these merchant ships to cruise accompanied by warships. Stavridis wants French, British and American minesweepers to come to the region. There is no need for this, because the minesweeping capabilities of the Black Sea coastals are more than sufficient. From all these we can deduce that some are trying to be militarily present in the region and provoke Russia using arguments such as grain export and “human tragedy”. This should not be allowed.

So, can we say that Turkey is preempting the attempts of France and NATO?

Stavridis knows what he is talking about. What he does is making a political appeal. Of course, Turkey should not allow such a step of NATO. Turkey openly stated that no warships would be allowed to enter the Black Sea, in accordance with Article 19 of the Montreux Convention. Any situation, being against the Montreux Convention, will not contribute to the re-establishment of peace; on the contrary, spreads the war, including NATO. This directly means that the war turns into a nuclear war.

Turkey is one of the countries that have strong relations with both Ukraine and Russia. Can Turkey play a key role in an agreement between the two countries on this issue?

Ukraine made impossible demands from the very beginning of the process. But Ukraine first needs to take the necessary steps to solve the problem in ports under its legal sovereignty. For this, Ukraine has to come to terms with Russia. The Sea of Azov and other Russian ports in the Black Sea are export ports for grain. In this respect, it is possible that Ukraine will consent to Turkish minesweepers opening a mine channel on its shores since Russia and Turkey have shared understanding. After the export ships pass through the area, Ukraine will again lay real or fake mines in the same area. This is the most sensible solution. Countries outside the Black Sea should never be allowed to interfere in this business.

The preamble to the Montreux Convention begins as follows: “Desiring to regulate transit and navigation in the Straits of the Dardanelles, the Sea of Marmara and the Bosporus comprised under the general term ‘Straits’ in such manner as to safeguard, within the framework of Turkish security and of the security, in the Black Sea, of the riparian States, the principle enshrined in Article 23 of the Treaty of Peace signed at Lausanne on the 24th July, 1923.” That is to say, the Montreux Convention accepts that the Black Sea riparian countries have a say in the matter of security in Black Sea. The Convention has been valid since 87 years. Any steps to be taken must be in accordance with the Convention. The steps taken by Turkey and Russia are exactly of that kind.

Şafak Erdem was born in Istanbul in 1993. He completed primary and secondary school in Istanbul, then studied philosophy and sociology as an undergraduate at Boğaziçi University. He is currently doing a master's degree in philosophy at Leibniz University Hannover.