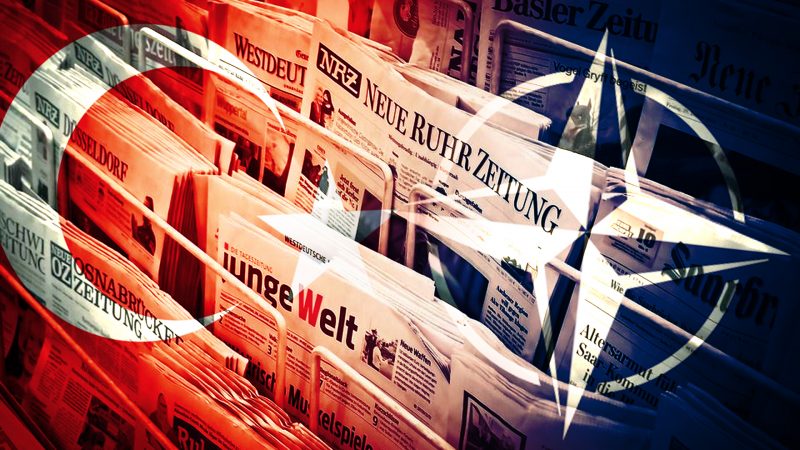 Sweden and Finland have applied for NATO membership, NATO authorities have stated the accession process, which usually takes up to 2 years, but a Turkish veto, announced repeatedly by President Erdoğan, has halted the process.

Diplomatic traffic between the two countries and Turkey as well as between Brussels and Ankara has taken up pace – with a look at the NATO summit scheduled for end of June in Madrid, Spain.

Meanwhile, the European press also debates the position of Turkey, possible solutions and long-term consequences for the relations within the alliance itself.

Here is an overview.

“Doubts on Turkey’s reliability as ally”

Ankara’s veto position is for the Dutch De Telegraaf another reason to doubt Turkey’s reliability as NATO ally:

“If the Turkish leader insists (on his demands), then an important breach occur within NATO’s unity after the Russian invasion of Ukraine. And this will be extremely painful for Sweden and Finland, which have taken a historic step towards membership. And the insistence on these unrighteous demands at Sweden and Finland once again raise doubts concerning the reliability of Turkey as an ally”.

The Dutch newspaper demonstrates that NATO statutes are provided rights – with the provider still having the last say.

“Avoiding a case of precedence”

The German magazine Der Spiegel observes that the functioning of the NATO as a whole is endangered:

“NATO has to reject Erdoğan’s demands also for strategic reasons: Otherwise, the alliance would create a dangerous precedence. Croatia’s President Zoran Milanovic already feels himself encouraged to raise demands in exchange for his approval of Sweden and Finland’s NATO accession. NATO cannot allow that the alliance degenerates to a space of blackmailing. Instead, it should take the risk of a conflict with Erdoğan.”

Spiegel’s comment reflects the fact of growing dissent within the alliance – which Turkey is only spearheading.

“Get rid of Turkey’s grip in the long-term”

The Danish newspaper Politiken says that NATO will have to give in in the short term, and proposes the West should liberate itself from Turkey:

“Unfortunately, Turkey’s blackmailing works in the short term, so that Erdoğan gets some concessions and maybe some money. The Turkish President also eyes the upcoming elections and hopes to smoothen the economic chaos, for which he is the lone responsible. That is worth including Sweden and Finland into NATO. But in the long term, the West must liberate itself from the ironclad grip of Turkey.”

The Danish newspaper’s comment is a warning to all those who think that bargaining with imperialism can eliminate the contradictions – quite the contrary: Today’s concessions to Turkey are even more reason for a ‘liberation’ of its ‘grip tomorrow.

“The problem of antidemocratic disrupters”

The Czech radio channel Český rozhlas also discusses then the trend of veto powers in NATO and EU:

“Neither NATO nor the EU have mechanisms to exclude members which deviate from democratic game rules. (…) Turkey already misuses its NATO membership to blackmail the two exemplary democracies Sweden and Finland. Hungary cannot be excluded from the European Union, although Victor Orban ignores rule of law since years and violates EU values. The founders of NATO and EU have underestimated that some countries with a weak tradition of democracy can turn into a problem.”

Another example of the common idea that – whoever uses a veto right demonstrates again its lack of democratic culture. Gives a clear idea what the powerful consider democracy in international politics.

The Estonian newspaper Eesti Päevaleht sees no alternative to negotiations with Turkey on the basis of realpolitik:

“Unfortunately, in order for Turkey to approve the NATO accession of our northern neighbors, one has to practice realpolitik and find out what Erdoğan wants for his approval in order to negotiate the necessary result. Is it enough if Sweden promises to stop blocking arms sales to Turkey and changes its attitude towards the PKK, which bothers Turkey? Or does President Recep Tayyip Erdoğan still have any secret desires or fears? The dictator is not an easy ally – especially for those who appreciate values-based politics.”

Sweden that for only moral reasons wants to join NATO and keep supporting armed terror groups elsewhere – while talking to protests against that is ‘realpolitik’. Occupation of moral grounds by imperialistic thought.

Turkey’s message is “addressed to Washington, not Finland”

The Finnish Helsingin Sanomat emphasizes that the conflict actually is Turkey’s counterpart in the conflict are not really the two Nordic countries but the United States:

“Turkey – like Croatia and possibly some other countries – will use the application process of Finland and Sweden to pursue its own political goals. In reality, the address field of the Turkish message says ‘Washington’. (…) Turkey doesn’t like the fact that the US is supporting the Kurdish troops in Syria. (…) The NATO states, led by the USA, are assuring that Finland and Sweden will join the military alliance at an unprecedented pace. This could result in the other NATO countries having to make some concessions to Turkey at the NATO summit in Madrid.”

The Finnish newspaper’s analysis is correct – and a call to Washtington to intervene. They really understood well the idea of NATO.

The Swedish ETC calls the Turkish President “little mediocre dictator” and forecasts he will get what he wants:

“Erdoğan took the chance. The small chest stretches like that of a bullfinch. No to Sweden and Finland, because ‘Scandinavian countries are havens for terrorist organizations,’ says the little mediocre dictator, who has spent the last decade jailing opposition figures, academics, journalists and other troublemakers on fictitious terrorist charges. The Kurds are the hardest hit. Now he is making demands: extradite us all that Turkey is demanding! Send them to torture and mock trials! Welcome to NATO!”

Turkey is teaching Sweden the rule of law – by requesting judicially correctly wanted people. The Swedish newspaper, in their defense, only sees “fictitious terrorist charges”. And of course it does not miss the chance to equate terror organizations with the people they claim to represent.

Another Swedish publication, the Svenska Dagbladet proposes to present Turkey an attractive offer:

“In the end, the conflict may need to be resolved in the same way as the dispute over the election of the NATO chief in 2009. At that time, Turkey finally agreed that Anders Fogh Rasmussen should become Secretary General after US President Barack Obama promised that his deputy would be a Turk. Maybe Obama’s vice president – the current President Joe Biden – can do something similar.”

Pretty naive approach that misses all that happened in NATO-Turkey relations since 2009 – from abandoned so-called peace talks with terror groups – in Oslo! – to coups to proxy wars in Syria and elsewhere.

Elections in Turkey – Ankara “should not overstep the mark”

The Finnish news outlet Iltalehti points to the parliamentary and presidential elections in Turkey and warns Ankara should “not overstep the mark”:

“Turkey will elect a new president and 600 members of the Turkish National Assembly for a five-year term in or before June 2023. Erdoğan and his party are under domestic pressure. (…) Added to this is the fact that Turkey’s economically ailing country is dependent on Russia, especially in the areas of energy, tourism and food supply. (…) However, there is reason to believe that this process will end well for Finland and Sweden. If Turkey oversteps the mark, it will have serious consequences for the country’s relations with the US, among others. Not to mention the credibility of NATO.”

Beautifully hidden threat to use democratic elections to topple government. True the point that Turkey’s relations to Russia are essential for the country’s energy, tourism and – security.

“The resurgence of NATO following Russia’s invasion of Ukraine must be coupled with an emphasis on the alliance as a force for democratization, to save the alliance from the accusation of being an incoherent military patchwork military relying only on military necessity. The accession of two of the world’s most important model democracies helps move in that direction. But that also has an impact on Turkey. So far, NATO has had to justify Turkey’s membership despite the suppression of the Turkish opposition and the decay of democratic institutions. NATO’s democratic profile is a necessary component of its survival over such a long period of time.”

The clothing for a more repressive position of NATO towards Turkey – with the goal of strenghtening the opposition against the government. By that intervention into domestic affairs, NATO would demonstrate its “democratic profile” – which is nothing else but using democracy for intervention. If Turkey keeps veto on track, propbable that this proposal comes true.

Almost all commentaries reflect the long-term, fundamental contradictions between Turkey and NATO, while they differ in their proposal of pragmatic approach in the short-term.

This is a clear indication that, however the crisis around Sweden and Finland’s NATO membership is solved – the next conflict between NATO and Turkey s just waiting around the corner.