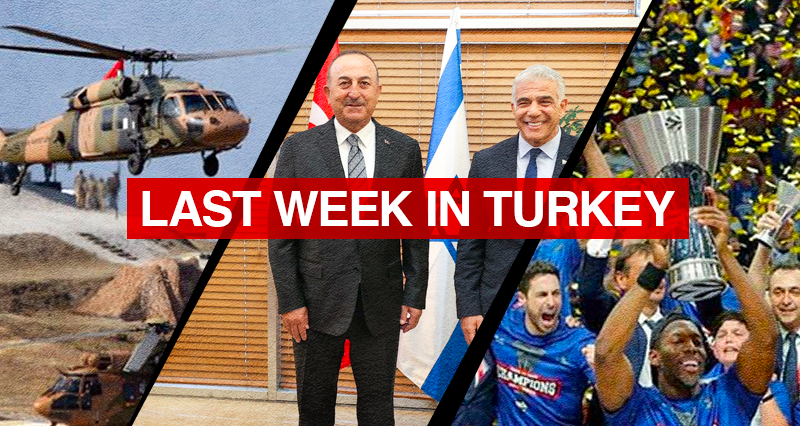 First was the expected diplomatic visit to Israel and Palestine, by the Turkish Foreign Minister Mevlut Cavusoglu.

Second were the discussions over a possible military operation against the terror elements, mainly the PKK/YPG, across Northern Syria.

FM Cavusoglu’s visit to Israel and the normalization process

Foreign Minister Mevlut Cavusoglu has become the first Turkish top diplomat to pay a visit to Israel in the past 15 years as Turkey and Israel are in efforts to mend the broken ties over the past decade.

Cavusoglu and Israeli Foreign Minister Yair Lapid organized a joint press conference following their talks in Jerusalem on May 25.

“We have conducted fruitful, candid and purposeful talks and agreed on a new framework for our ties,” Lapid said at the press conference, also announcing that the two sides decided to resume the work of a joint economic commission and hold talks for a new civilian aviation agreement.

Turkey and Israel are two important countries in the region, and they are able to mend ties despite differences on a number of issues, the Israeli Foreign Minister stressed. Noting the process ahead will be continued through sustainable dialogue and technical talks, person-to-person and business-to-business.

“So, in this visit that comes after 15 years, we are expecting improvements not only in diplomacy and security but also economic and civilian ties,” he said.

For his part, Cavusoglu underlined the importance of dialogue and continued technical talks for the normalization process between the two nations, saying, “Working on a positive agenda will help us to discuss our disagreements in a more constructive way.”

A sustainable dialogue will be an important asset for the normalization of the ties, the Turkish top diplomat stated, adding, “This should be based on mutual respect to our own sensitivities. This will not only be useful for our bilateral relationship but in regard to the peace in our region.”

“We have agreed to bring about a new energy in our multifaceted ties, create different mechanisms and resume talks on civilian aviation,” he also said.

The trade volume in 2021 hit more than 8 USD billion despite the pandemic and the figures in the first quarter of this year show a continued increase in bilateral trade, he informed.

Cavusoglu also stated that the technical talks between the Turkish and Israeli foreign ministries will continue over the coming period for the acceleration of the bilateral normalization process. Despite expectations, the two ministers have not signaled when they would exchange ambassadors as diplomatic representation is still at the level of chargeé d’affaires since 2018.

Cavusoglu also underlined the Israeli-Palestinian problem, stressing that Turkey believes that a two-state solution under the UN parameters is the best and only way to resolve the problem and bring about lasting peace in the Middle East.

The Turkish top diplomat stressed that Turkey has always been keen for a stable and peaceful Middle East through an agreement between Israel and Palestine. “We always played a constructive role in bringing peace to the region,” he stated.

Cavusoglu also visited the Al-Aqsa Mosque, that has a great importance for the global Islamic community in the occupied East Jerusalem.

He also visited the Jerusalem Islamic Waqf and met with its Director Azzam al-Khatib.

Earlier in that day, Cavusoglu visited the Holocaust Remembrance Museum “Yad Vashem” in West Jerusalem and laid a wreath in the museum hall.

His engagements in West Jerusalem were followed by a visit to Palestine on Tuesday, where he met President Mahmoud Abbas and Foreign Minister Riyad al-Maliki in the West Bank city of Ramallah.

Abbas received Turkish Foreign Minister Mevlut Cavusoglu in Ramallah and discussed the Palestinian cause and Israel’s assaults on Palestinians.

According to the Palestinian official news agency WAFA, Abbas told Cavusoglu that Palestine is committed to its obligations under international law and to finding a political horizon for ending the Israeli occupation.

Abbas also stressed the importance of continuing the work of the Turkey-Palestine Joint Committee to enhance bilateral ties between the two countries.

Nine agreements and memorandums of understanding (MoUs) were also signed at the Palestinian Foreign Ministry in Ramallah as part of the committee’s work.

Discussions over a new counterterrorism operation across Northern Syria

Turkey is set to clear two areas of northern Syria, near the Turkish border, of terrorist elements in a bid to eliminate the terror threat from the region, President Erdogan said on last Wednesday.

“We are entering a new phase of our decision to establish safe zone 30 kilometers deep, south of the Turkish-Syrian border. We are clearing Tel Rifat and Manbij of terrorists,” Recep Tayyip Erdogan told at a group meeting of his party in Ankara.

Erdogan said that Turkey is ready to launch an operation to protect the nation and the locals from the YPG / PKK terrorist threat in Northern Syria, as other actors have failed to fulfil their commitments to provide a safe zone in the border area.

Erdogan went on to say that the western world that has been standing idly by Turkey’s security concerns and humanitarian tragedy happening across the southern borders of Turkey now found itself in the middle of a similar crisis with a hot conflict that began in the north of Black Sea.

“Those who used their opportunities to increase their own welfare instead of contributing to security alliances, for which Turkey bore all the burden for years, came to NATO’s door after the Ukraine crisis,” he said.

Adding that from Libya to Karabakh, the shouts of victory are rising wherever Turkey help out its brothers, Erdogan said that Turkey disrupts the plans on the region that will have negative consequences for the country.

And on Tuesday, Turkish Defense Minister Hulusi Akar reiterated Ankara’s determination to continue fighting against terrorism regardless of who is behind it.

Speaking to reporters in Abu Dhabi, where he paid an official visit, Hulusi Akar stressed that Turkey does not accept any terror presence on its southern border and northern Syria.

“Due to the current situation, we see that we have to make some interventions to protect our country. … We will continue our fight until the last terrorist is neutralised,” he noted.

Akar also highlighted that Turkey respects the borders, territorial integrity, and sovereignty rights of all its neighbors, especially Syria and Iraq.

“Our only target is terrorists. For us, there is no ethnic, religious, or sectarian discrimination between terrorism and terrorists,” he said, adding Kurds and Arabs are Turkey’s brothers and sisters.”

The US Secretary of State Antony Blinken on the other hand, told a joint news conference with NATO Secretary Stoltenberg: “Any escalation there in Northern Syria is something that we would oppose,” underlining Washington’s support for “the maintenance of the current cease-fire lines.”

“The concern that we have is that any new offensive would undermine regional stability and provide malign actors with opportunities to exploit instability,” Blinken said.

“We continue effectively to take the fight through partners to ISIS within Syria and we don’t want to see anything that jeopardizes the efforts that are made to continue to keep ISIS in the box that we put it in,” Blinken said, using an alternate name for the Daesh terrorist group.

The Turkish Airlines EuroLeague witnessed back-to-back championships for the first time in the last nine years, and the winner was the Turkish Basketball team Anadolu Efes.

Anadolu Efes SK made history by defending its crown from last season with a 57-58 victory over Real Madrid, the team with the most titles in competition history. Efes becomes the first back-to-back EuroLeague champion since Olympiacos in 2012/2013.

Anadolu Efes coach Ergin Ataman was delighted after the game.

“Real Madrid made a great game, but we knew how to manage the game, especially the last minutes because I have in the team star players who know how to play in that kind of situation,” he said.

“In the finals, strategy, especially offensive strategy, is not working well, you see that in all games in the Final Four. But great players can resolve situations. In the last quarter, all the team made a great defence, we really solved the problems for the offensive rebounds. We had a big problem until the third quarter with offensive rebounds, we gave away a lot of points, and then we found a way to win the game.”

Efes forward Adrien Moerman acknowledged the support of the fans. “Unbelievable! I can’t describe it right now because this is a great moment,” he said on the court after the match.

Semifinal hero Vasilije Micic from Serbia, who made a last-second three-pointer to place Anadolu Efes in the final said he is especially happy to win the championship in his homeland. ”This is a great achievement for us. Really speechless. I cannot believe that we made it. I am extremely happy. I want to thank all the fans. I hope we made them proud,” said Micic.

Forward Chris Singleton said the victory is for the fans. ”It’s an amazing feeling. We just won it for the fans. I cannot explain how happy I am and how joyfully I am. I just want to celebrate it with my all teammates. We go down the history. Only three teams in history got to be two-time champions. That’s just very special. That just shows your character. It is a great move,” said Singleton.

The two European trophies were then placed on the steps of the mausoleum for a photo opportunity with the fans.

Speaking to the press in Ankara, Ataman said by coming to Anıtkabir they were continuing a tradition.

There have also been many other sports awards that Turkish athletes and players won in various sports fields, that would rejoice the 19th May National Youth and Sports Day.

Turkey also became the continental best at the European Taekwondo and Para-Taekwondo Championships held in England.

The national taekwondo athletes reached the top of Europe as a team with a total of 11 medals, including five gold, two silver and four bronze in Manchester.

They defeated Poland’s Wisla Krakow 5-2 in the final held in the city of Krakow.

Turkish duo Ahmet Ali Kabadayi and Halil Kaan Koroglu, in the meantime, won the gold medal in the men’s doubles.

There was also good news from the World School Sports Olympics held in France.

Turkish young athletes finished the competition, organized by the International School Sports Federation (ISF), with a total of 92 medals, including 25 gold, 25 silver and 42 bronze.