“We need a more inclusive table of dialogue” 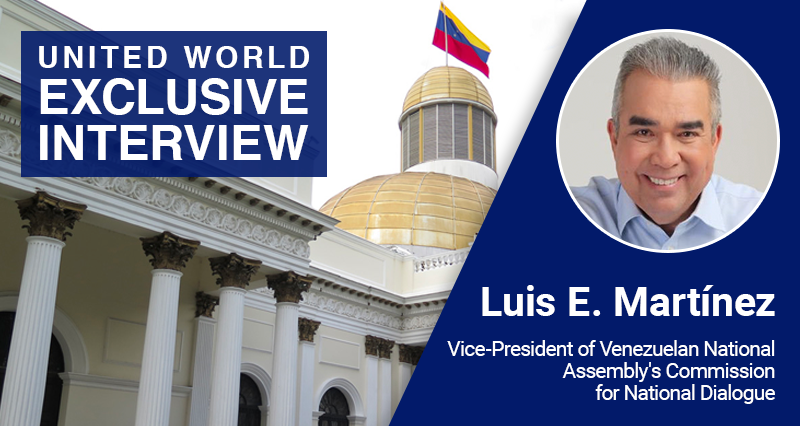 The visit of a United States delegation to Venezuela and the consideration of lifting of sanctions have pulled into focus the tasks between the Venezuelan government and the opposition.

We spoke on their status with Luis Eduardo Martínez, a veteran deputy for the oppositional Acción Democrática in the National Assembly. Martínez is in addition the Vice-President of the Commission for National Dialogue in the Venezuelan National Assembly.

What is the role of your commission currently?

We are currently working to reinitiate the national dialogue and make it more including. In the beginning, during the talks in Mexico, only a small part of the opposition was represented facing the government.

The new table of dialogue needs to include those political parties that have gained lots of votes in the recent regional elections. In addition, the entrepreneurs and the workers, the academics and representatives of communication media need to be represented here. Besides, in our opinion, this table of dialogue should not only focus on political terms but also on matters of economy and society.

These ideas are in discussion now. We hope it will be understood that the only way the dialogue can be successful is that it is an inclusive one.

To what degree has the national table of dialogue advanced, where the other opposition led by Guaido was not represented?

You are fully correct, they not been incorporated in that process – but not due to lack of invitation. Other parts of the national opposition have well participated in the 14-month-long meetings of reconciliation in our commission.

The entrepreneurs for instance have taken an active part and continue to do so. They have for instance presented proposals for laws in our commission, which then have been transmitted to the general assembly, providing an early success.

I hope that the work of our commission is understood better ant that all political factions will take part in the dialogue of reconciliation.

We Venezuelans so much like to speak, but when it comes to dialogue, we are so bad. Why is that so?

I would here express a criticism, which also is a self-criticism. The political class of the Venezuelan politics suffers of a grave autism. Here, I would make a call to this political class to open ears and eyes to what is taking place around them. If they take to the streets, they will see that the people do not care about the polemics among the politicians but for the matters of daily survival.

How is your observation of the current dialogue and expectation for the future?

I’m an engineer; therefore, I like to quantify things. From 0 to 10, I would say we are at 6 points in terms of a successful dialogue, that is, I am moderately optimistic that the dialogue will lead to solutions fast.

This will above all be possible, because both sides have in the meantime recognized that they cannot progress without each other: Coup d’états, invasions or sanction simply do not work, and they have acknowledged that. They know we have to sit down, talk and find compromise and consensus on the problems of Venezuela.

I would insist that this a minor part of the Venezuelan opposition, and that the way to solve the problems of the country is to advance the dialogue. Moreover, in our commission, we have different sectors of society represented that are seeking solutions.

And in general, I’d say that we advance faster and to better solutions if our dialogue is led without foreign intervention.

See, the in building right behind you, I received in the last week a low-profile delegation of US think tanks. I told them what I told other international delegations too: This is a country that has problems, that has conflicts, but it is also a country that has a government – like it or not. There is a functioning legislature here that enacts laws and solves conflicts. We have a functioning judiciary here.

Therefore, the image that some – outside of Venezuela – have produced is completely false. This image causes a great damage to us, albeit a visit to our country suffices to change your mind.

I can of course nıt reveal the source, but we have the following information in regard to the recent meeting in Miraflores (Venezuelan Presidential Palace) between the Bolivarian Government and the US delegation, including Juan Gonzalez, Special Assistant to US President Biden and James Story, US ambassador for Venezuela: there was a calm and respectful meeting, where everybody in the US delegation addressed Nicolas Maduro as “Mr. President”.

I am not a lawyer, but I think this is a clear recognition of who is the head of state – whether you like him or not.

Seriously, I don’t know what Mr. Erdoğan would if one day, someone stood by the side of the Bosporus and says he is the President of Turkey now.  I told it recently to a British visitor. What would you do if suddenly someone stands on the Trafalgar Square and declares himself the King?

And the British visitor responded: He would not end up in prison, but in a madhouse for being considered mentally ill.

And this is your approach as an oppositional politician?

Sure. I reiterate: I do oppose the vision that this current government has, I do oppose the economic model they pursue. I do oppose the severe errors they have committed. But this does not mean that I do not recognize here is a government, an assembly and a tribunal that execute their functions. If I call the number of Miraflores, I am sure it will not be Juan Guido who responds.

How do you evaluate the recent visit of the Turkish Foreign Minister to Venezuela and Maduro’s announcement that he would visit Turkey soon?

Very positive. On our recent trip to Europe, we have stopped over in the beautiful city of Istanbul, where we also had the chance to meet political representatives. There is a relation between Turkey and Venezuela that gets better everyday. In terms of commercial activities, we are in a symbiosis. We hope that this relation, which was born out of difficulties, continues and deepens.

Turkey is an important country. It was the Ottoman Empire before, and today, it has turned itself into a point of reference in Europe and Asia under the presidency of Erdoğan.

What do you think, how long will it take till Venezuela regains its normal economic status?

The problem here are the sanctions. Today, there is a great debate about this. It does not take place here in Venezuela, where almost everybody the lifting of sanctions.

The debate is going on in the United States itself, with a great influence of the Midterm elections. There are on the one side certain think tanks, representatives of the state department and even congress members that highlight the need to normalize relations, there are other factors that are conspiring to inhibit this normalization, above all, republican candidates in the state of Florida. They are pursuing a strong campaign to boycott all kind or steps to normalize relations.

In addition, groups connected to the extremist opposition in Venezuela are also working to stop the lifting of sanctions.

In the meeting that I mentioned previously, one of the representatives of US think tanks I met has confessed to me that the Office of Foreign Assets Control (OFAC), which manages the sanctions, had the license for Chevron almost ready, just waiting for the permission of the state department and the White House to approve it.

(While the interview was prepared to publishing, the United States Treasury renewed the existing license for Chevron operate under restrictions till November.)