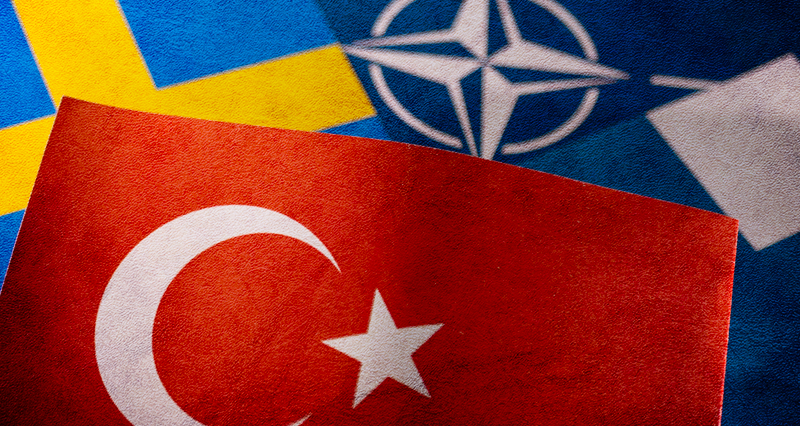 Ankara made statements, indicating that it would inhibit Sweden and Finland’s NATO membership, placing the issue on top of the global agenda. The matter is being discussed from a variety of angles and probably will continue to do so.

Within these debates, I would like to present a summary of my opinions.

USA against the rest

The United States wants to continue its project of a unipolar world, which has emerged after the 1990s. Such a unipolar world foresees the US’ complete control over the global energy resources and routes and the dominance of the US dollar.

In order to reach its goal, Washington needs to kneel down countries that have a strong heritage of statehood, a powerful military and economy. China, Russia, Turkey and Iran are heading the list of these countries. It is the United States’ fundamental strategy to suffocate these countries by dividing or encircling them.

The United States is not only targeting leading Eurasian countries or oppressed nations, that it considers adversaries. Washington also wants to make sure that its “allies”, such as Europe, do not turn into competitors. The US needs to push them aside in the division of the world, or needs them to function in in accordance with Washington’s interests.

In short: there is a contradiction between the objective interests of the United States on the one side and the rest of the world on the other.

Turkey and NATO on opposing sides of the front

There is not doubt in that, within this confrontation, Turkey is one of the main targets. Washington states open and clearly that the PKK/PYD is its main ally in Syria. They even define the terror organization as their “ground force”. Military aid, joint exercises, joint robbery of Syria’s oil resources, attempts to change the regions demography all provide clear proof of this alliance, leaving no room for doubts.

The picture is not different in the Eastern Mediterranean. The United States has constructed an anti-Turkish bloc here. The US-led NATO is trying to enclose Turkey on its shorelines and eliminate the existence of the Turkish republic of Northern Cyprus (TRNC). This bloc is the actor most disturbed by the Turkish military presence in Libya.

This surrounding of Turkey begins in Syria, moves over the Eastern Mediterranean and continues in the Aegean Sea to end up in Thrace, with the US bases recently established in Alexandropouli, Greece. The United States’ plans concerning Ukraine and the Black Sea are part of this general strategy. It is not Russia alone that is encircled here.

The Turkish Armed Forces are fighting in Syria against the United States and its allies, while a bloc led again by Washington threatens them in the Eastern Mediterranean. We can watch all this simply and openly on TV screens. But the pro-American Fethulah Gülen coup attempt of July 15/16, 2016 did not happen just on TV. We witnessed in person this American attack on the streets of our cities.

The United States first tried to eliminate patriotic personalities from politics and the military using conspiracies such as Ergenekon and Sledgehammer. Then they tried to declare their full dictatorship with the coup attempt. It says a lot that the suppression of the coup is interpreted on the other side of the Atlantic Ocean as “the cleansing of pro-NATO generals in the Turkish Armed Forces”.

The cost of NATO membership to Turkey

Turkey’s position in this confrontation is not only obvious today and yesterday but in the very first days, when the country entered NATO. The process that started with the deployment of Turkish soldiers to Korea to serve US interests, continued with the provocations against non-Muslim Turkish citizens in the events of September 6-7, 1955, the coups of March 12, 1971 and September 12, 1980 and the assassinations, massacres and killings organized by the NATO-founded counter-guerilla.

NATO was bad yesterday, and it is bad today. Turkey was officially a NATO member, but still, it has always been a NATO target. Yesterday, the country was undermined by NATO forces. Today, they attack it openly.

Therefor, the problem is not limited to Sweden and Finland’s stance of supporting terror organizations. This is about a strategic contradiction between Turkey on the one side and NATO and the US on the other. The US is the actor that supports the PKK/PYD most. In that context, the NATO enlargement not only threatens Russia. Ankara’s policy towards NATO concerns Turkey’s security and welfare directly.

Therefore, Ankara’s position to hinder Sweden and Finland’s NATO membership converges with Turkey’s national interests fully. And it needs to be emphasized that this positioning reflects clearly and definitely the evaluations and demands of the Turkish nation.

National and international polls conducted among the Turkish population display this fact very clearly. Turkey is heading the list when it comes to opposing NATO and the US, because it is considered here that the main threats comes from the other side of the Atlantic Ocean. The Turkish people do not trust the NATO, and it does not see its future within the Western alliance. According to these polls, the Turkish people prefer the cooperation with China and Russia.

“Russia threat” will not revive NATO

This preference results from objective facts. We have already stated that Turkey’s national security is being threatened. NATO is the United States’ tool to maintain the unipolar world. The alliance was founded back then pointing at the “threat of the Soviet Union” and “the danger of communism”. Both the Soviet Union and the Warsaw Pact have disappeared more than 30 years ago. Then, why does the NATO still exist? NATO keeps on existing to serve its purpose: mobilize the “allies” along with the US interests and keep them under control on that way.

This is the reason why NATO has no future. Its “brain dead” had already occurred. The Ukraine crisis and the “Russia threat” will not revive it. New crises within the alliance are inevitable. Europe will, sooner or later, recognize the trap it has been pulled into. The developments in economy have already started delivering according proof. Washington meanwhile is not at all bothered by the fact that the European economy is going down. Quite the opposite, they are even content. At the end of the day, Europe’s dependency from the US is increasing, while the possibility of the old continent rising as an independent pole is impeded.

By including Sweden and Finland into the NATO, the US also tries to foil the project of an independent “European Army”. Besides, Finland and Sweden shall be turned into bridgeheads against Eurasia.

All this does not benefit the European members of NATO or Finland and Sweden at all.

For that reason, the number of people in Europe is growing rapidly who think that the conflict in Ukraine should stop and that Kiev should not be encouraged to fight anymore. So much so that the entry of Finland and Sweden into NATO will make relations with Russia much more tense.

In fact, with the completion of this process, the issue of NATO membership of Ukraine and Georgia will quickly come to the fore.

A complete rupture of relations with Russia could turn into an economic disaster for Europe.

It is impossible that these objective interests remain covered and without effect. Will they wake up early, or only after having gone through negative experiences? But anyhow, sooner or later…

Turkey has no future in NATO

Turkey meanwhile has no such future in NATO. The Atlantic is losing economic dominance, and its also falling behind in terms of military competition.

Turkey has practically and factually already been pushed outside of NATO. The alliance places Turkey at the side of NATO’s enemies. It was not a mistake that Erdoğan and Atatürk were presented as the enemy camp in NATO exercises and meetings. Their display as the adversary force reflected a simple truth.

Adding to that the purchase of S-400, Turkey’s rejection to take part in sanctions against Russia and the recent statements on rejecting Sweden and Finland’s NATO membership, we have now started to hear very frequently voices in US TV channels and press that “Turkey should be expelled from NATO”. Whether and how a country can be expelled from NATO is another issue, but in their minds, Turkey has long stopped being a member of the alliance. And even practically..

A fact worth being emphasized is that Turkey is not alone. The world population’s majority, and the great majority of the global economy and military force shares the same burden and fate, facing the same challenges. In short, Turkey has a huge potential for alliance.

And it should also be noted that, the more Turkey defends its own interests in a decided way, the more it gains respect on the international level. The effect that the recent statements concerning Sweden and Finland’s have had in Russia are another demonstration of that fact. This decisive stance will surely also have economic consequences.

Besides, with its position concerning Sweden and Finland, Turkey is not even in the NATO alone. Croatia and Hungary are also raising their voices with a similar content.

What Moscow and Beijing should do

Therefore, there is no reason at all for Turkey to kneel down in face of US pressure. But at that point, vanguard states of Eurasia, such as Russia and China must understand and acknowledge the following: Turkey will of course repel this attack relying on its own power. But taking the adversary force it faces into consideration, it is imperative that its own strength is supported by international alliances.

To state it more clearly: Moscow needs to take immediate steps to help eliminate the PKK/PYD in Syria; the Turkish Armed Forces’ struggle against terror beyond the borders must be supported; Ankara must not feel itself left alone in the issues of Eastern Mediterranean and Cyprus. If these steps are taken, than international conditions will be given to ensure that Ankara takes not step back from its veto against Sweden and Finland’s NATO membership.

It’s time to think about a new security system

In essence: What ever Turkey does in respect to its relations with NATO, it will have done so in its own interest. And while the country defends itself, it will contribute to the security and welfare of whole of Eurasia. In that sense, Sweden and Finland’s NATO membership should not be a matter of negotiation or bargaining. After all, Turkey’s national security cannot be negotiated or bargained. On that matter, a decided stance with a strategic approach is necessary.

Meanwhile, Turkey’s defense industry needs to become more independent urgently. Military technologies that are dependent on the NATO will not serve in potential conflicts with the US or its allies. The further development of the national defense industry, including the Bayraktars, MILGEM ship and the Altay tank, and the further support for defense systems, such as the S-400, deem great importance in that context.

The Atlantic era is coming to its end, ringing also the final bell for its intervention force, the NATO. We are entering a phase where Turkey cannot defend its own security and its economic development while remaining in the NATO. The need to leave NATO now imposes itself on our country.

Not only Turkey, but also Europe and the whole world face the need to plan and realize a new security system, because what the NATO system produces is conflict and crisis, not security. While a security system independent of the US awaits Europe, the world also needs a collective security system to protect itself from US aggression.