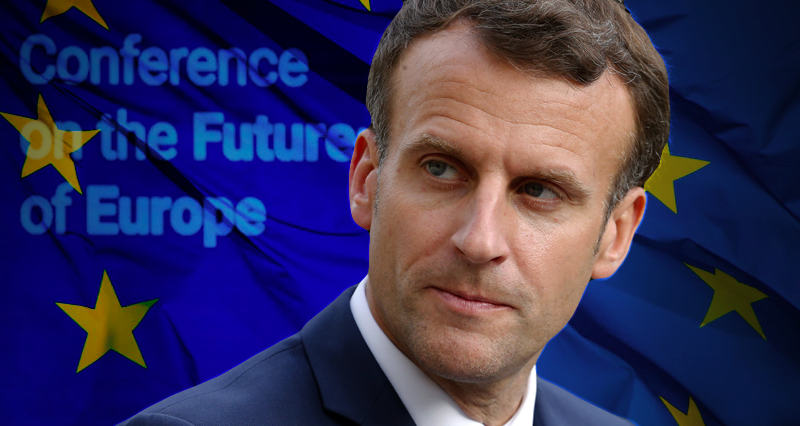 Earlier, he had gathered attention with his statement that “NATO was brain dead”. Now, the French President Emmanuel Macron has incited a new debate with his proposal of a ‘European Political Community’. Having stated that the European Union would not suffice to answer the needs of the peoples of Europe and that its reform was necessary, Macron is expected to present the proposal to debate on the EU’s June summit.

Having become increasingly dependent from the US after World War II, Europe debates already for a time about how to decrease the dependency on Washington and strengthen strategic autonomy. Although it has been targeting to establish “a military force” for years, the EU has nevertheless stayed in the shadow of the NATO under US-leadership. Now, with global balances of power changing, the Union has started new quests. The EU has in that context approved the ‘Strategic Compass’ document, which is a guidebook in terms of defense and security. Although the EU’s plans have been interrupted by the Ukraine crisis, France, which is holding the temporary presidency, is continuing its efforts for a “strategic autonomy”.

The EU’s quest for ‘strategic autonomy’ has been accelerated by a number of factors: The US’ reorientation of forces towards China; Washington’s retreat from Afghanistan without even consulting its European allies; Australia’s cancellation of the submarine deal with France – worth billions of dollars – and its entry into an alliance with the US and Britain, named ‘AUKUS’. But Washington aims to use the Ukraine crisis in order to continue its hegemony over Europe and consolidate its dominance over the continent by turning Russia into the enemy. The US President Biden has declared in the last week that he was “worried Russia’s occupation of Ukraine could dissolve NATO and the EU”. Despite Washington’s pressure, especially Germany and France are avoiding to impose energy sanctions on Russia due to their own dependencies on Russian gas. French President Macron has stated that imposing sanctions on Russian energy would lead to results to be felt in the coming winter.

In his speech in the European Parliament, where he articulated the proposal of a European Political Community, Macron emphasized that, even though war had returned to European soil, Europe was not in war with Russia. Macron said: “Europe is not fighting against Russia. We shall not discriminate Russia or seek revenge from it.” Saying that Europe needs to eliminate crises from its agenda, Macron emphasized the need for a more independent EU that is stronger in terms of defense. Commenting on Ukraine’s request for “fast membership”, Macron said this process of EU accession would not advance fast enough, taking maybe up to decades, thus concluding the need to reorganize Europe.

In his speech, Macron said the following:

“How can we organize Europe from a political perspective and with a broader scope than that of the European Union? It is our historic obligation to respond to that question today and create what I would describe here before you as “a European political community”.

This new European organization would allow democratic European nations that subscribe to our shared core values to find a new space for political and security cooperation, cooperation in the energy sector, in transport, investments, infrastructures, the free movement of persons and in particular of our youth. Joining it would not prejudge future accession to the European Union necessarily, and it would not be closed to those who have left the EU (Britain, Eİ.).

It would bring our Europe together, respecting its true geography, on the basis of its democratic values, with the desire to preserve the unity of our continent and by preserving the strength and ambition of our integration.”

The Italian Prime Minister Draghi also gave a speech in the European Parliament beginning May, where he stated that European institutions were insufficient for the current crises. Draghi made a call for reform and proposed a “pragmatic federalism”. But 13 of the 27 members of the EU have reacted negatively on Macron’s proposal. The 13 countries have published a joint communiqué, where they stated their distance to “unconsidered and premature attempts”. The statement, signed by Denmark, Bulgaria, Croatia, Czech Republic, Estonia, Finland, Latvia, Lithuania, Malta, Poland, Romania, Slovenia and Sweden, said:

“While we do not exclude any options at this stage, we do not support unconsidered and premature attempts to launch a process towards Treaty change. This would entail a serious risk of drawing political energy away from the important tasks of finding solutions to the questions to which our citizens expect answers and handling the urgent geopolitical challenges facing Europe. (…) The EU has acted quickly to find – and implement – common and effective solutions. We already have a Europe that works. We do not need to rush into institutional reforms in order to deliver results.”

The Lithuanian President Nauseda stated that he saw Macron’s proposal of a ‘European Political Community’ as a clear attempt to cover the lack of political in favor of conceding Ukraine the status of a EU member candidate.

The President of the EU Commission, Ursula von der Leyen stated in her speech concerning the proposals that the principle of unanimity had lost its meaning in certain fields, negatively affecting decision-making processes. She added that the EU had to play a greater role in defense and health politics.

After speaking in the European Parliament, Macron made his second international visit after elections to Germany and discussed his proposal with Chancellor Scholz. Reacting Macron’s proposal politely by distant, Scholz called it “interesting approach to deal with the big challenges that lie ahead of us.” However, Scholz also stressed that the proposal should not turn into an element to keep the Union from continuing its long ongoing work on membership processes, and added Macron’s idea should not hamper the accession process of the current candidate countries.

At the very same date, Macron has held a meeting with Chinese President Xi Jinping. Both sides agreed on incentivizing peace talks in Ukraine, while Xi emphasized his country supported the Europeans in taking their security into their own hands. The Chinese President also warned against polarizations that were threatening the global security and stability.

Stating France’s desire to cooperate with China in the Ukraine issue, Macron said that both the European Union and his country were decided to insist on achieving strategic autonomy, while rejecting said polarizations and taking part in these.

Speaking with German Chancellor Olaf Scholz virtually, Xi Jinping reiterated his support for Europe’s strategic autonomy. While Washington was trying to crush Europe’s self-confidence and increase its dependency on NATO by using the Ukraine crisis, Beijing on the other side tries to keep Europe from being placed at frontlines by the United States, by supporting Brussels’ strategic autonomy from Washington.

Macron’s proposal of a European Political Community is not a project thought as a substitution of the European Union. It is independent from it. With Ukraine, Moldova and Georgia applying for membership after the Ukraine crisis, the list of countries waiting to access the EU has got pretty long. The European Political Community will be able to cooperate with these countries on the grounds of common principles, with these countries becoming part of Europe and continue their process of membership to the EU. But being part of the Community does not grant EU membership.

The European Political Community is discussed primarily in the context of Ukraine, Moldova, Georgia and the countries of the Western Balkans. The approach has also raised questions for Turkey. Membership negotiations started with Turkey in 2005 and were halted in 2019, with the idea being discussed that Turkey would not become member of the EU at all, while from Brussels proposals of a “Privileged Partnership” excluding membership were expressed. Whether such a relation would satisfy Ankara is questionable. Besides, it should not be forgotten that the EU’s Strategic Compass defined Turkey as a third party and targeted its Eastern Mediterranean policy directly.