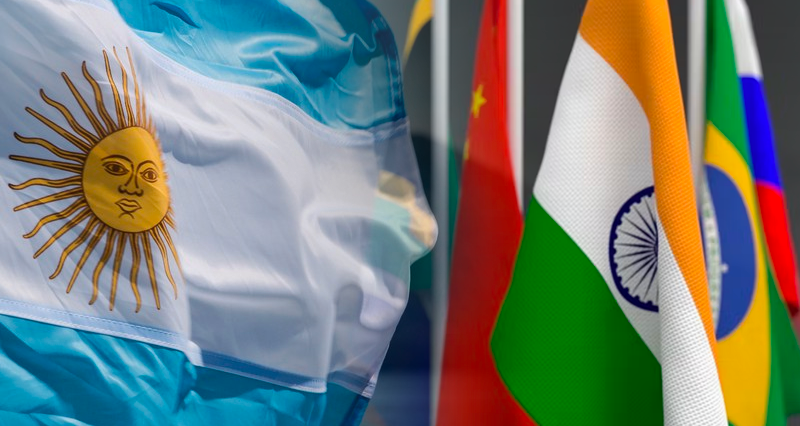 The Ukraine crisis has set debates on the so-called rules based order and multipolarity on the global agenda. BRICS is a usual suspect when talk comes to the polycentric or multipolar world system. And the 2006 established alliance between Brazil, Russia, India and China that later included also South Africa may present news very soon – with the inclusion of Argentina as a new member.

Holding BRICS’ temporary presidency, China’s leader Xi Jinping has invited Argentina officially to take part in this years summit. Its first convention is expected to take place virtually on May 20th with participation of Foreign Ministers. A summit of the Heads of State is scheduled for June 24.

This is not the first time Argentina is invited to a BRICS summit. In 2014, then Argentine President Christina Kirchner took part in the summit in Brazil upon invitation of Russian President Vladimir Putin.

“But this time, there is strong support from the countries that make up the BRICS”, tells Sabino Vaca Narvaja, Argentina’s ambassador to China to United World International.

Indeed has Argentina taken strong steps towards integration into BRICS in recent times. The country officially has joined the Chinese Belt and Road Initiative and signed a comprehensive list of agreements concerning cooperation in energy, security and economy.

In a visit to Moscow before the eruption of the Ukraine crisis, Argentine President displayed a position of multipolarity and raised eyebrows when he “invited Russia to use Argentina as gateway to Latin America”. Fernandez also rejected to take part in sanctions against Russia. But his government did support the US motion to expel Russia from the UN Human Rights Council.

On a recent visit to Europe, Fernandez stated his country’s interest “to get closer” to the BRICS. His justification: “Our main trade partner Brazil is there”. Brazilian Economy Minister Paulo Guedes said he would present Argentina as a candidate to join the New Development Bank (NDB) of the BRICS group.

While Guedes is part of the Bolsonaro government, the other candidate for the presidential election in Octobe, Lula da Silva already declared to revive the BRICS if he gets elected.

Argentina’s inclusion into the NDB is a major factor, given the country’s huge debt and according recent agreement with the IMF over 44 billion US Dollar.

Vaca Narvaja tells that the NDB “was created to establish a global financial architecture that works as an alternative to the Bretton Woods system, allowing to mobilize funds for development by participating members of the bloc.” That includes the use of national currencies in international trade, a proposal that Brazilian presidential candidate Lula also expressed recently.

Vaca Narvaja says that according works have started already between China and Argentina and adds this “implies multilateralism in monetary affairs” – besides of BRICS being a “political space that works for a more balanced world”.

With approximately 45 million, Argentina would be the member with the smallest population. According to the World Bank, its economy produced a GDP of 390 billion dollars in 2020, surpassing South Africa by 50 billion. In Latin America, Argentina commands the third biggest economy after Brazil and Mexico.

The country’s approach to the BRICS comes in times when the Community of the Latin American and Caribbean States, CELAC, has also signed comprehensive agreement with China. Argentina has the Protempore Presidency of the CELAC.

According to Argentine Ambassador to China, the invitation to the summit will bring his country “closer to the goal of formal membership”. Vaca Narvaja says Argentina may become a full member in the legislative period of Alberto Fernandez.

Hegemonic dispute between BRICS and the United States

But in the past, other models of association to the BRICS have also been discussed. The model BRICS Plus for instance once incorporated Egypt, Turkey and yes, Argentina, into the summit process.

The approach of Argentina to the BRICS still causes waves within the New Cold War that takes place on the Latin American continent between the United States on the one si de and China and Russia on the other. Brazilian author Emir Sader emphasizes that the “Hegemonic dispute between the United States and BRICS will be the general framework of the 21st Century – with Latin America playing a determinant role.”

Whether the country becomes a full member of the BRICS or enters new limited agreements with its member countries – Argentina’s participation in the summit alone is a strong loss for the United States.

A loss that comes in a time when the US itself is struggling to get the continent together under its own summit in Los Angeles in framework of the “Summit of the Americas”.

Argentina will take place in both summits. The summit in Los Angeles will speak Spanish, but the summit of the BRICS will speak of Argentina’s future.