The current power competition and the Taiwan issue 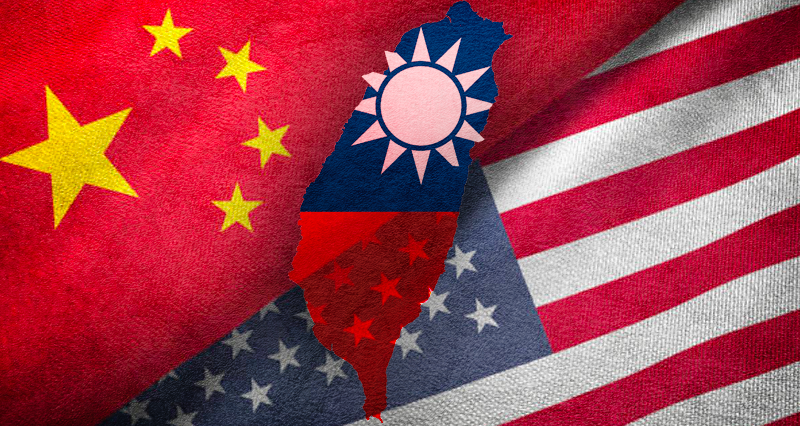 The world is going through tough times with the Russia-Ukraine war, the most chaotic conflict of the last period that was shaken by the pandemic.

As the world was going through a new structuring process in the light of the freshly formed balances with the beginning of this war, a similar problem, the Taiwan issue, began to get on the agenda more and more. In this ‘new normal’, defined as the New Cold War, the US-Western bloc faces Russia, with a discussion coming up whether the US-Western bloc will dare a conflict with China apart from the economy.

In the cyclical environment created by the Ukrainian war, it is now clear that the power competition in the world has become a brand new one. The new competition, which is experienced at a more hybrid level rather than a classic cold war, is rapidly moving towards a new normal where the USA thinks that it assembled the Western Block with the Ukraine war in addition to the growing tension with China. Although the United States and China are undoubtedly in conflict in countless areas, the Taiwan issue is perhaps the most prominent one.

While China describes Taiwan as an “indivisible part of its mainland,” the United States considers the island an “advanced outpost“ in the Asia-Pacific that it can exploit against China.

After the start of the Ukrainian war, Chinese officials, in the growing Taiwan controversy said; “Taiwan is not Ukraine, it is an integral part of China”. The US President Biden meanwhile was saying “The United States will defend Taiwan to the end in the event of a possible Chinese move against Taiwan.”

As for the two statements, the Taiwan issue will occupy the world agenda as one of the greatest and critical issues of this new normal. Although China does not deny its desire and plan to add ‘Taiwan to the mainland’, it is clear that there are different reasons for the United States to turn to China after Russia. Especially in recent years, China has gained a big influence both economically and militarily.

The fact that The United States is uncomfortable with this situation can be easily seen in the last three National Security Strategy reports, which have cited China as the biggest danger. On the other hand, the political and military rapprochement of China and Russia before the Ukraine war is another issue that disturbs the USA and is also included in the strategy reports. Although Russia’s invasion of Ukraine seems to have encouraged China about Taiwan at the first glance, it can be said that China has learned lessons as the war prolonged. Because China, both does not want to make a statement that would anger Moscow and does not want to damage existing relations with Washington and European capitals.

However, we cannot evaluate China’s approach without ignoring the following facts. First of all, the military and political presence of the United States in the Middle East, Asia-Pacific and Asian regions is the main motivation for the strengthening of the China-Russia relations to date. On the other hand, there is a belief that China and Russia, who want to create their own spheres of influence in these regions, will merely reverse the hegemony of the United States with a unity of power.

But could the United States, which has managed to unite the western powers around itself again with the war between Russia and Ukraine, achieve the same thing in a possible Taiwan tension?

China’s Taiwan rhetoric towards the United States, which considers Taiwan an “unsinkable aircraft carrier“, can be called arbitrated with a growing nationalism, especially in recent times. Taiwanese officials suggest that China may carry out a “full-scale“ invasion of their country by 2025. The US, on the other hand, defends a similar thesis to Taiwan’s. Since the beginning of last year, more than 300 attacks by Chinese Army warplanes on Taiwan’s Air Defense Identification Zone ADIZ and a growing number of military exercises around Taiwan have become “routine activities”. These acts are strengthening the claims.

In fact, China does not fully reject these claims. Even with the words of former Chinese President Zedung “Five, fifty or five hundred years. It doesn’t matter. When the day comes, Taiwan will merge with the mainland, as in Hong Kong.” They make it clear that they will make Taiwan part of the Chinese mainland.

The United States has long been trying to make its moves to balance China’s expansion moves and guide the Western bloc away from China, as it did in Russia. The closest example to this is the US and Western (Anglo-Saxon) steps that are trying to shape the region with regional security pacts such as AUKUS (Australia, the United Kingdom, and the United States). The US’s relationship with Taiwan is defined by the “Taiwan Relations Act“. By law, the United States is committed to support Taiwan’s defense and cooperating to maintain its current status quo.

At this point, the main issue is whether the USA and China will go to war over the island.

While increasing geopolitical and military competition is pushing the international system into an indefinite instability, the situation that has turned from cold war to a ‘hybrid’ war causes blocks to be formed in the world, increasing the possibility of war. Although the economy, hegemony and sphere of influence are on the background of the tension, China’s increased military exercises, AUKUS and Taiwan issues are deepening the apparent crisis.

Will the US and China fight over Taiwan? A word used after a recent meeting between US National Security Adviser Jake Sullivan and his Chinese counterpart Yang Jiechi summarizes these balances and answers this question:

After President Biden stated that the United States would defend Taiwan against China, the Pentagon’s announcement that there would be no change in policy towards the island actually supports this ‘responsible competition’ rhetoric. Looking at the statements of the parties, they are in favor of maintaining the status quo that persists in the region, such as China, at least for the near term in the United States. Besides, issues that have entered the world literature as ‘frozen problems’ have been perceived as a trump card for the countries concerned also arises here.

Thus it is necessary to say that, despite all the findings, this sharp competition for both countries will remain within the concept of a hybrid cold war for the near term and will be shaped by the consequences of the Russia-Ukraine war. We can say that the United States and China will push the boundaries of a hybrid cold war on Taiwan, but they will avoid the possibility of a hot war as much as possible, acting within the logic of “responsible competition“.