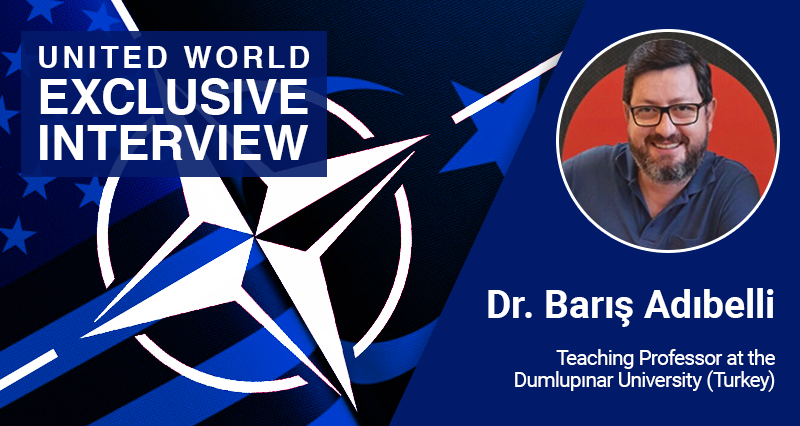 “The Ukraine conflict has altered all dynamics of the global order and the regional geopolitics. What was impossible yesterday has become possible today. The conflict has born some results that surprised the US too, beginning with India walking away from the American alliance. We are asking ourselves whether India was heading towards the Russian-Chinese side, but now, they appear on the scene as an axis on their own, as a separate power center on their own.”

Claims of a global NATO

Dr. Barış Adıbelli evaluates the enlargement of NATO and states that the Ukraine conflict has opened the door to a new world. In this world, argues the professor from Turkish Dumlupınar University, is the NATO intended to be reestablished with a global mission. Adıbelli says the inclusion of Finland and Sweden into the alliance should be understood in that context.

“The Ukraine crisis is not just a conflict between Russia and its neighbors. The Ukraine war hints to the direction the world is evolving to. Joe Biden had stated “a new world order is being established, and we have to lead that process.’ From that point on, NATO has started to invent itself new missions.”

Sweden and Finland are coastal countries of the Arctic Ocean, a sea that will open up much more to trade traffic due to climate change. Dr. Adıbelli argues that the struggle over the Arctic should also be seen in the context of the Chinese Belt and Road Initiative. He says the Finnish and Swedish authorities had just in March expressed negative views on NATO membership, but today changed position over US pressure. Adıbelli continued:

Dr. Adıbelli describes the US approach to the crisis as follows:

“The US policy over the Ukraine and beyond is the following: Closing the doors of Europe to Russia. And closing the doors of Russia to China. They want to prevent that China gets Russia’s help and that Russia is capable to maneuver inside Europe.”

“The membership of Sweden and Finland is a great exercise of encirclement by the US to stop Russia’s access to the seas and especially the so-called warm waters. If Russia in this war takes a step back, if they give up on Crimea, as the US demands, than there policy of access to warm waters would be finished. Than, Russia would be imprisoned and closed of. Therefore, this is an existential conflict for Russia.”

“The United States wanted to control Ukraine for the issue of Crimea. Crimea is an unsinkable aircraft carrier in the Black Sea. Just as Taiwan in the South China Sea or Cyprus in the Mediterranean. If Ukraine had gained control over Crimea, the US would have established a military base there. And who ever controls Crimea controls the Black Sea. It is that simple. An Ukraine that has lost Crimea has not much worth in the eyes of the US. Both, the US and Russia are fighting right now over the future of Crimea, not that of the Donbass.”

Pressure on Turkey will increase

Can the NATO membership of Sweden and Finland be vetoed under these circumstances? Adıbelli responds as follows:

“If other NATO members besides of Turkey raise their voices, this may become possible. But right now, the US and Britain are exercising a huge pressure on Turkey. Turkey is slowly and step by step becoming isolated with its Russia policy. Hungary, Bulgaria, Romania, these countries cannot change the game. The US will pressure with all its might. Biden is going through difficult times in domestic politics. When his situation gets worse in November with the midterms, his administration will pursue an even more aggressive policy. They will be even more warmongering. In this process, where the NATO is restructured on the global scale, Turkey as a peace-defending state is a bit lonely.”

The US will present conditions for the sale of F-16

“Right now, I don’t think that Turkey has the luxury to veto that membership. NATO evaluates the conflict as an existential one, just as Russia does. The NATO summit in June in Spain will move the things to a different level. The Foreign Minister Mevlüt Çavuşoğlu has been invited to the US for May 18. What will the US demand in that meeting? Will they tell us to ease up on the issue of Finland and Sweden as a precondition to purchase the F-16?”

“They said that the sale of F-16 aircraft was in accordance with US and NATO interests. Now, Sweden and Finland are on the agenda, NATO wants to become global, and they talk of strengthening Turkey on the eastern flank. All this happens on the same days.”

NATO’s interest in the Eastern Mediterranean

“This all may be presented as a package. Sooner or later, they will also present the issue of Greek Cypriot Administration of Southern Cyprus. Because NATO will not be the NATO it was. NATO does not accept vacuum. President Erdoğan had said his government would not give up on Russia or the Ukraine. Obviously, he is facing pressure to do so. NATO and the US are pressuring hard on Turkey.”

“NATO and the US said to Turkey: ‘You did what was in your hands to achieve peace, but you see Russia is not willing. Now, you also should close your air space.’ And tomorrow they will demand that Turkey joins the sanctions.”

Dr. Adıbelli says “the war has started in Ukraine and will continue in the Asia-Pacific. He adds: “As NATO has changed its scale, it will start a campaign for membership from Australia to India to South Cyprus.”