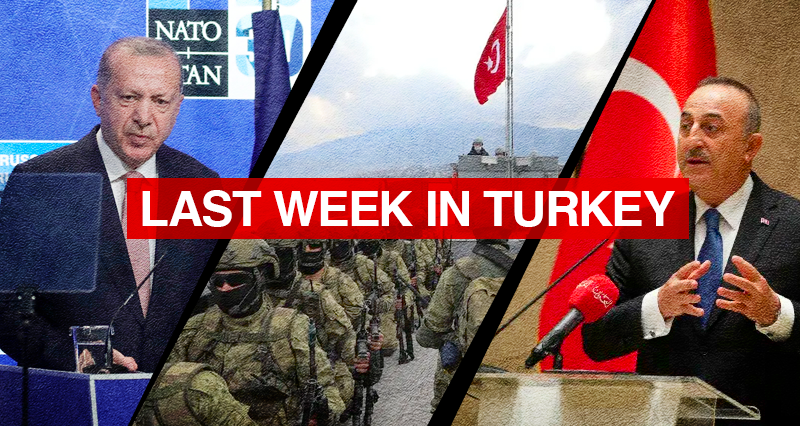 The political agenda in Turkey has been very intense in the last week. President Recep Tayyip Erdogan’s opposed Finland and Sweden’s request for NATO membership. His position became a top topic in the nation. Meanwhile, the military operations of the Turkish Armed Forces against terrorist elements in Northern Iraq are still ongoing. Another item on the agenda was the condemnation message sent by the Turkish Foreign Ministry to Israel.

President Erdogan: “We are not in favor of a NATO membership of Sweden and Finland”

The Turkish President Recep Tayyip Erdogan made a hesitant statement regarding the NATO membership of Finland and Sweden, which are on the global agenda.

Answering questions from reporters after the Friday prayers, Erdogan said that his government was not in favor of Sweden and Finland’s NATO membership.

Erdogan made the following statement on the subject: “We are following the developments regarding Sweden and Finland, but we do not hold positive views on that matter. Some of these Scandinavian countries are guesthouses for the terrorist organizations. The PKK and DHKP-C are well nestled in Sweden and the Netherlands. They have even members of the parliament in some countries. It is not possible for us to be in favor.”

Reminding that Turkey had allowed Greece to return to its previously-suspended NATO membership after the military coup of 1980, Erdogan reminded the anti-Turkish attitude adopted by the Athens today; “Because the administrations before us had made a mistake in NATO, about Greece back in those days, and you know the attitude that Greece has adopted towards Turkey with NATO behind its back. As Turkey, we do not want to make the same mistake again.”

Turkish Foreign Minister Mevlut Cavusoglu also condemned the support given by Sweden and Finland to terrorist organizations, saying; “The problem is that these two countries are openly supporting and engaging with PKK and YPG.”

“Therefore it is unacceptable and outrageous that our friends and allies are supporting this terrorist organization,” he said. “These are the issues that we need to talk about with our NATO allies as well as these countries” Sweden and Finland, he added.

However Presidential Spokesperson Ibrahim Kalin stated that Turkey has not closed the door to Sweden and Finland joining NATO.

On Friday, White House press secretary Jen Psaki said that Washington is “working to clarify Turkey’s position” and believes there is “broad support” among NATO members for Finland and Sweden to join the alliance.

Asked about Erdogan’s comments during a press conference in Helsinki, Finnish Foreign Minister Pekka Haavisto said: “We need some patience in this type of process. It’s not happening in one day. This is all what I can say at the moment. Let’s take issues step by step.”

Jussi Hallo-aho, chairman of the Foreign Affairs Committee of the Finnish Parliament, said there is nothing to worry about, adding; “Erdogan’s comments concern Sweden’s foreign policy more than Finland’s. Finland came to the forefront of these issues (YPG/PYD) less than Sweden”.

Ann Linde, Sweden’s foreign minister, told Swedish radio on Friday that Turkey could be trying to use the membership push to gain something it wanted. “We know that ratification processes always involve uncertainties, not least that the ratification could be used for domestic politics,” she added.

Swedish Foreign Minister also made the following statements threatening Turkey: “We want the support of all countries in NATO. The important countries of NATO are behind us. It would be in Turkey’s interest to get along well with us and those countries.”

While Finland and Sweden’s NATO memberships are supported by the United States, Russian officials said that such a move could have serious consequences.

The military operations launched by the Turkish Armed Forces on April 19th against the PKK terrorist organization in Northern Iraq continue successfully.

In the written statement made by the Turkish Ministry of National Defense, it was shared that, so far, more than 80 terrorists have been neutralized in the operations carried out with the support of the air and ground forces against the PKK throughout the Northern Iraq.

In the statement, it was noted that many hideouts and shelters belonging to the PKK terrorist organization were destroyed in the operations and significant number of arms and ammunition was captured.

The US acting assistant secretary of state Victoria Nuland said “The United States intends in the next few days to issue a general license to facilitate private economic investment activity in non-regime held areas liberated from ISIS in Syria”.

Evaluating the US announcement and the current state of military operations, Erdogan made the following statements;

“YPG is a terrorist organization. YPG is what the PKK is. Therefore, it is not possible for us to accept this mistake by the United States. But unfortunately, it has given all kinds of material support to the PKK terrorist organization or all similar structures in the north of Syria. They have delivered truckloads of vehicles, equipment and ammunition to these places. Although we have warned the previous administrations about all this, they did not listen and these steps continued to be taken. And now we hear this. But I’m very clear about the PKK, YPG etc. Now you see the Operation Claw-Lock. Whatever we do in the Northern Iraq, we will continue to do so in Northern Syria. And we will continue our actions against the organizations that are hostile to us, no matter who is behind them.”

Erdogan continued his remarks as follows; “As you hear, 82 terrorists have been neutralized during the Claw-Lock as of yesterday. And of course, if weather conditions continue favorable, I hope this numbers will grow much further. Because we cannot afford to turn a blind eye on these terrorists. And we also tell this to the all countries that appear to be our friends. You are making a mistake. Take the right steps.”

The Turkish Foreign Ministry once again condemned the Israeli government’s acts of violence against the Palestinian people and its illegal occupation actions.

In the condemnation statement, which also covered the murder of Palestinian journalist Shirin Abu Aqila by the IDF, the Israeli occupation actions in the West Bank were mentioned as follows; “We condemn the decision of approval, taken by the Israeli authorities yesterday, for 25 separate projects, involving the construction of 4,427 new settlement units in the occupied West Bank on Thursday and the attempt to legalize the settlements “Mitzpeh Dani” and “Oz V’agon” which had been “considered illegal even under Israeli laws.”

In the statement it was emphasized that such unilateral steps raise tension in the region and disrupt the favorable environment for peace, while Israel was asked to end these acts, which are contrary to both international law and the established parameters of the United Nations (UN), as well as endanger the two-state solution process.

The Foreign Ministry’s statement also referred to Shirin Abu Aqila, the Palestinian correspondent of the Al Jazeera television channel, who was murdered by the Israeli soldiers in the city of Jenin in the Israeli-occupied West Bank, with the following statements:  “We also reiterate our expectation that the events that took place on May 11th, the death of Al Jazeera correspondent Shirin Abu Aqila in the Jenin refugee camp located in the West Bank and the injury of another journalist, will be clarified through an open, impartial and comprehensive investigation and that those responsible will be brought to justice as soon as possible.”

It is still unknown how this statement, which was made during the normalization steps were taken between Turkey and Israel, will affect the bilateral relations.