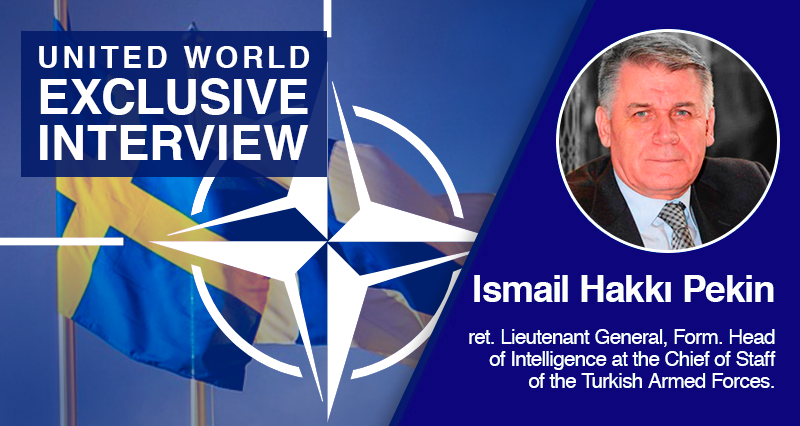 While the Ukraine crisis continues, Sweden and Finland announced that they will speed up the decision to join NATO. Swedish Social Democratic Party announced that the official decision on whether to join NATO or not will be made on May 15 and according to reporting in Euronews, Finland will hold a meeting on the subject on May 14.

We interviewed Ismail Hakkı Pekin, retired Lieutenant-General and former Head of Military Intelligence at the Turkish Armed Forces’ Chief of Staff on the Ukraine crisis and NATO’s enlargement and their effects on the region and Turkey.

Sweden and Finland want to accelerate their NATO membership process on ground of security reasons. NATO Secretary General Stoltenberg also announced that if they applied for membership, NATO would protect them until they become a member. How do you evaluate the process of NATO’s enlargement? How will Russia react to this situation? What stand do you think Turkey should take?

First of all, both countries have already agreed with the UK and the US and received security guarantees, but Stoltenberg is still not authorized to make such a commitment on behalf of NATO. The US is trying to consolidate Europe by demonizing Russia. I think Turkey should veto their membership if possible. Other countries may use their veto rights as well, for instance Croatia.

This is a dangerous process and it divides the region in two parts; Russia on one side and NATO on the other. It’s like the old era of iron curtain. Also, this expansion would show that the idea of the European army has come to a dead end. When these countries become members of NATO, they will spend money on weapons. Armament will increase in the region and will provide a new market for USA. The USA is pressuring Europe in this regard. It creates a political polarization and in the region. The USA is trying to consolidate Europe by turning Russia into the enemy. Germany even suggested that all the Balkan countries should join NATO. This creates serious polarization and conflict. The US’ goal after expanding NATO is, positioning NATO against Russia to turn towards China by including Japan into the alliance. I hope that Turkey will veto this situation.

Israel has requested the suspension of Russia’s membership of the UN Human Rights Council. Moscow made comment on Tel Aviv’s statement: “disgusting”. Tensions continue between the two countries. What consequences could Russia-Israel tensions have for Turkey and for the region?

I read a news in the Muscowite press that some Russian troops in Syria will be sent to Ukraine. Of course, this could be fake news. Since the war started, there has been a problem between Russia and Israel. Israel first abstained from commenting on the Russian intervention and then later, condemned it. Meanwhile, it turned out that some Israeli ex-soldiers were fighting and providing training in Ukraine. This caused great concern in Russia.

In order to send a message, Moscow said that it would review the situation regarding the Israeli air force moving comfortably in the Syrian airspace. Then, Lavrov said that Zelensky could be a Nazi even if he was a Jew, and that Hitler had also Jewish origins. He declared that the Jewish diaspora supported the Nazis in that region. Indeed, the Jewish diaspora supports the militias in Ukraine and does not take a neutral stance.

This tension will also be reflected in Syria. Turkey has troops in Syria. It affects us too. Russia may create difficulties for Israel to act comfortably on Syrian territory. It can stop Israeli troops from performing operations. Russia can activate air defenses and complicate Israel’s operations. Moscow can support the Palestinians. This issue may cause some changes in Syria. On the other hand, it is said that Russia will reduce its troops in Syria. It is important who enters the places that Russia leaves. Some reports say that Iranians would enter these locations. If that happens, Turkish-Iranian relations will also be adversely affected.

On the other hand, the tension between Russia and Israel can be turned into an advantage. Turkey-Syria and Turkey-Russia relations can be first steps in solving the Syrian problem. This includes the refugee issue. Turkey can cooperate with Russia on this topic. Of course, Turkey also has a normalization process with Israel. This process can also be directly affected. Turkey is trying to resolve the latest problems diplomatically. If Turkey does not take a direct party in this tension, it can cope with the problems that may arise and seize the opportunity to resolve the issue of PYD and refugees. The issue of PYD and refugees is one subject. It should be considered as a whole. Cyprus, the Eastern Mediterranean, the natural gas problem, should be evaluated by Turkey as one. Turkey can turn the issue into an opportunity by bringing these challenges to the agenda.

Turkey should seek a consensus with Iran on the PKK issue

How do you evaluate the claims of the US Defense Intelligence Agency (DIA) that the Iranian-backed militias are in cooperation with the PKK and that they are carrying out attacks against Turkey in northern Iraq and Syria?

These allegations can disrupt relations between Turkey and Tehran. Turkey should definitely negotiate with Iran on this issue. The PKK is losing power in the region with the latest operations in the region. We know that Barzani also took precautions against the PKK in that region. The Baghdad government also supports the process. This way, the PKK is losing seriously influence and force in the region. In the Sinjar region, there is cooperation between the Yezidis and the PKK. Hashd al-Sha’bi is also included in this. Turkey should clearly negotiate with Iran on this issue. Turkey should emphasize that the US-supported PKK problem needs to be solved. This issue is important for the relations between the two countries.

There are also other topics. There are plans in the region, such as inducing a war between Pakistan, Afghanistan and Iran. There is a serious immigration problem. There has been a serious migration to Iran from Afghanistan and this has caused problems. This is one of the important issues between Turkey and Iran right now.

Ankara should talk to Tehran about the refugee issues, Hashd al-Sha’bi and the PKK. If we can’t do this, the USA will achieve its goals and a Turkey-Iran conflict will erupt. This benefits the USA and the UK. Both sides should discuss and resolve this issue together. A solution must be found that will protect both side’s interests. Turkey should meet with the Assad administration, Russia and Iran may also be included to this meeting. In these meetings, the PKK, the Hashd  al-Sha’bi, the issue of Yazidis can be brought up.

In fact, Turkey should open the Ovacık border gate and start this project from Ovacık to Baghdad. Iraq is important to us, if we can bring a solution to the Iraqi problem, it will also bring a solution to the Syria problem. A solution to the Syrian problem alone will not be enough to solve the Iraq problem. Turkey gives the necessary importance to Iraq. However, if the Iraq and Syria problem is not resolved, it will be Iran’s turn. Turkey should make the meetings regarding to this issue and act together with them against terrorism.