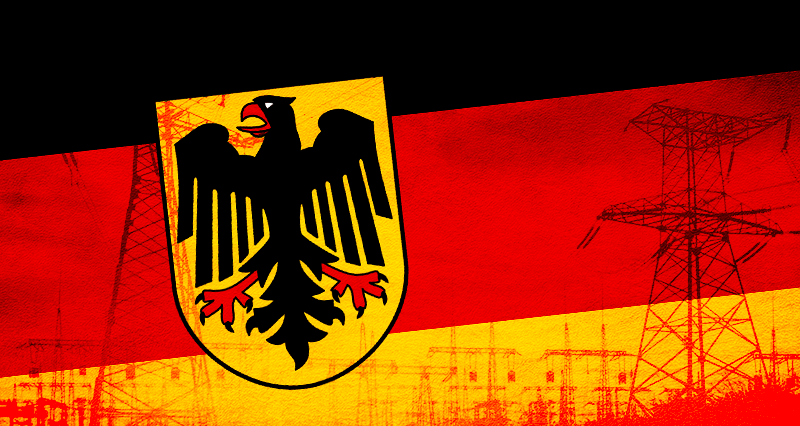 Germany’s positioning in the Ukraine conflict has started to shake the basis of the country’s energy supply and economy. The government reacts with intervening into the market economy, including considering expropriations in a new law.

“The security of supply in Germany is currently safeguarded” This is – every day until now – the first sentence in the German Federal Network Agency’s reports on energy supply in the country. As a governmental agency, the institution is responsible to watch over the energy, telecommunication and railway markets.

It’s daily reports remind Kurt Stenger, author for the daily newspaper Neues Deutschland, of the covid pandemic. He recalls that during the pandemic, the according government agency, the Robert-Koch-Institut, was also publishing daily reports that the public had eyes upon.

And Stenger observes another similarity: “The state governs without parliamentary control or a broad public debate to respond to a threat” – last time it was a virus, this time it is the consequences of a political decision.

Within the transatlantic alliance, Germany has condemned the Russian “military operation” in Ukraine. The government has announced a “Zeitenwende” (turning point). Established energy cooperation and trade between Germany and Russia in all sectors – coal, gas and oil – has become a target for Berlin.

The Federal Ministry of Economy and Environment Protection follows the general position “to reduce energy dependency from Russia in a fast speed”. But the steps it has taken indicate that German capitalism is currently not able to function without Russian energy.

On March 30, the government has announced – first time ever in German history – to declare the early level of the gas emergency plan for gas. According to the network agency, the early warning means only observing the market and supply situation more closely. But what the government has since then intervened directly into the market economy, heading to a point reminding of a wartime economy.

With a law on the storage of gas decided upon on March 25, the German government forced gas importers to continue buying gas and fill the depots to 90 percent by October 1.

On April 7, the government started to sell approximately 6.5 million barrel of oil from strategic reserves. On April 8, the government has decided to introduce “a protection shield for companies affected by the war”. This package included governmental insurances, exceptional credit lines to ensure cash flow and subsidies for companies to smoothen effects of rising energy prices, as the governmental “Second Report on the Progress Towards Energy Security”, published on May 1 states.

Moreover, the state has entered the scene as an investor. The federal government has subsidized the construction of 4 FSRU terminals with 2.94 billion Euro. The Ministry of Economy expects them to start operation within this year.

The government has decided to ignore given laws and regulations. The abovementioned report formulates this as follows: “With the LNG-acceleration law, approval agencies are permitted temporarily to allowed to exempt from applying certain procedural demands (…) (in order to) to ensure faster approval of concessions then would be possible according to the given legal situation” (translation, YS).

The report then analysis the current situation in regards to the three major energy sources oil, coal and gas. Concerning oil imports, it states that current oil trade contracts have not been prolonged, and concludes in regard to the US-British demand of an oil embargo: “It is realistic to end the dependency on crude oil imports from Russia by the end of summer. An oil embargo with a sufficient transition period seems to be manageable for Germany if rising costs are taken accepted.”

Coal, where Russian imports have made 50% of German consumption, has already been included into the sanctions list of the EU on April 9. Currently, states the ministry, has Russian coal a share of 8%, with current contracts running till August 10.

Germany’s biggest dependency is gas. Russian deliveries made up to 55% of all gas consumption in the country. Here, the ministry demands a “national major effort”, where government, enterprises and households shall work together.

Berlin’s plan is to force the population to consume less – rising prices are expected to make saving more “attractive” (i.e. inevitable) and to substitute imports from Russia with LNG imports.

But in spite of the reports optimistic tone, gas independency is expected to be “achieved broadly until summer 2024.”

All these measures of creating energy independence from Russia are presented optimistically, but a law draft presented on April 26 by the governing coalition tells otherwise.

Actually, it is a reform of the energy security law from 1975 – a law passed then in response to the oil embargo declared by the OPEC against western countries n the context of the Yom Kippur War.

The law declares as goal to “maintain the governmental capacity to act in face of a supply crisis in order to ensure or reestablish energy supply security in case of a crisis.”

The measures foreseen in the law tell a story about how serious the German government considers the situation: If, as probable, approved by the parliament, Berlin will have the right to place companies of critical infrastructure under trust management – or even expropriate energy companies.

Germany’s foreign policy decision in regard to the Ukraine crisis leads the country increasingly to establish a wartime economy: in order to provide the necessary energy to its economy and households, the German state opens the door to establishing state companies again. Economy Minister Habeck justified the law as follows: “The prices are high, the insecurity is great and risks are given. We have to be prepared that the situation gets dramatic. Right now, it’s about doing everything to keep basic supply running” (translation, YS).