The triangle of Turkey-Russia-Israel, the Eastern Mediterranean and the opportunities 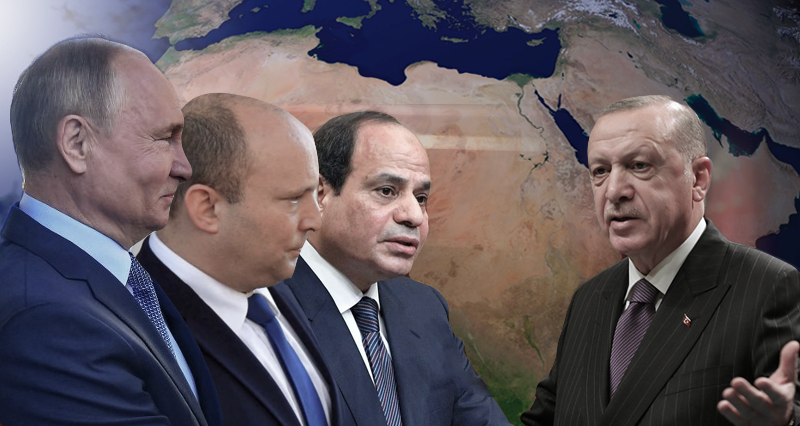 The effects of the Russian military intervention in Ukraine are being felt in the Eastern Mediterranean just as they are throughout the rest of the world.

The equation, formed by the complete rupture of Russian-European relations, leads the countries of the region to new options.

The new situation in the Eastern Mediterranean

Although the relations between Russia and Israel started off positively with Tel Aviv’s refusal to participate in economic sanctions against Russia at the beginning of the Ukrainian War, the situation was still strained in the process when Israel changed its foreign policy on Russia.

However, at the heart of these tensions lie Israel’s efforts to further accelerate the project to create an alternative energy corridor to the Russian gas pipelines, establishing it between the Eastern Mediterranean and Europe by taking advantage of the Ukrainian War.

Israeli efforts to normalize its relations with Turkey can also be explained with this energy issue. The main goal of the project is to deliver the Israeli gas to Europe via Turkey.

The statements from the Turkish and Israeli officials also confirm the existence of such project.

The Turkish Energy Minister Fatih Donmez makes the following statement about the transportation of the Israeli gas to Europe via Turkey: “We already have our domestic transit system over our territories. Some of the (Israeli) natural gas can easily be transferred through that network. However if a higher volume of supply comes up in the future, additional pipelines may need to be built. However, we can easily transfer the initial amount of gas supply both abroad or within the country.”

The former Israeli ambassador to the European Union and Jordan, Oded Eran commented on the possible Turkish-Israeli energy deal; “The Russian-Ukrainian crisis and the sanctions against Russia have brought the ‘Turkey option’ back on the table (…) Cooperation between Turkey and gas producer countries in the Eastern Mediterranean will be beneficial for all.”

Media also reported that Israel had submitted a document to Ankara regarding the transport of the natural gas from Leviathan and Tamar reserves during the meeting between President Erdogan and his Israeli counterpart Herzog.

In light of these developments, it is also worth noting that President Erdogan’s planned visit to Iran has been cancelled.

Moscow’sresponse to Israel’s actions regarding the Ukrainian crisis has been the following: Statements of condemnation through the Russian Foreign Ministry, an improvement of contacts with Palestinian officials especially from Fatah and Hamas, and possible handing over of the ownership of the St. Aleksandr Nevskiy Church in Jerusalem, to Moscow.

However, if Israel takes this negative attitude even further, it can be expected that Moscow will respond to Tel Aviv through its relations with Syria and Iran.

Turkey, on the other hand, is in normalization talks with Israel, which has been conducting policies against the Turkish interests in the region, despite its alternatives such as Libya, Egypt, Palestine, Lebanon and Syrian in the Eastern Mediterranean.

Turkey takes actions as if Israel was an indispensable ally, just as it did in the past.

But today, the world is in a new situation.

As the multipolar world order imposes itself onto the whole world, the United States and its allies keep losing their power in all different parts of the earth.

This includes the Eastern Mediterranean, which includes West Asia and Israel.

This new situation comes with opportunities for new politics to be implemented.

1. The positive steps from Russia towards Turkey in the field of energy would prevent the US/Israeli camp’s efforts to weaken the Ankara-Moscow relations in context of energy.

2. The normalization of Ankara-Cairo relations is in favour of the overall region. Moscow, which has good relations with both countries, can play a positive role in this process. An axis between Ankara, Moscow and Cairo would balance out the influence of the US/Israeli camp in the region.

3. A new situation emerged in Libya after the defeat of Haftar. Turkey and Russia, the two influential actors in the country, can work together to solve the Libyan issue.

Any steps to be taken in this direction would force Israel to move away from the US camp, and to act more in harmony with the countries of the region.