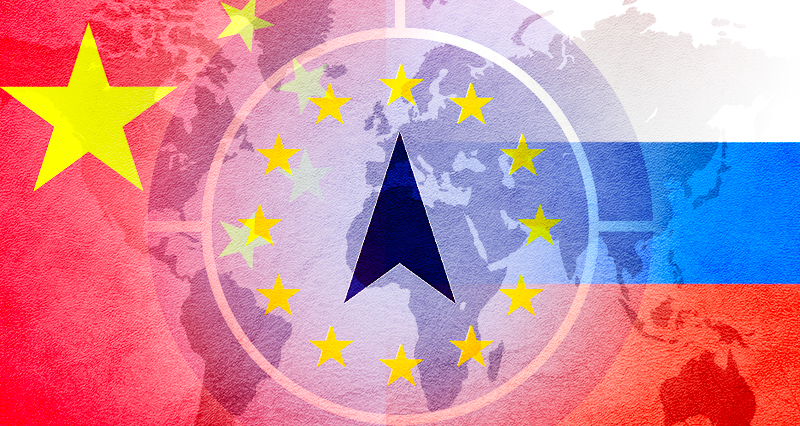 Turning the EU’s “geopolitical awakening into a more permanent strategic posture” – this is how the EU’s High Representative Josep Borrell announces the “Strategic Compass”.

The European Union has adopted its “Strategic Compass for Security and Defence” (SC). The document is result of a long process of consultation ad decision-making. The Council of the European Union has established an according task force in in June 2020. A classified Threat Analysis was concluded in November 2020, identifying the “threats and challenges” the EU will face in the next 5 to 10 years.

Member states led a strategy debate during the first half of 2021, followed by a workshop developing a draft text of SC. The European Council and all of its member states approved the final text on March 21, 2022.

The result claims to be a guiding text for the European Union’s perception of global politics and thus deserves a close look. The recent eruption of conflict in Ukraine is all over the Strategic Compass. But more than changing the odds, it serves as an illustration for an already given perception and positioning.

The European Union concedes the end of the hegemony, which had been established after the Cold War. Several aspects lead Strategic Compass to this conclusion.

The document reminds that after the dissolution of the Soviet Union, a vision of “effective multilateralism” was prevailing (Strategic Compass – SC, p. 7). In this context, Western countries were able to pursue their interests via international organizations such as the United Nations, using these to globalize their actions including military interventions, change of borders or dissolution of states. Western interventions in Yugoslavia, Iraq, Afghanistan and Libya were all – to a different degree – were accompanied by supporting UN resolutions and missions.

This system is substituted by a “return to power politics”, says the Strategic Compass (SC – 7). This is of course an evaluation of others: Western countries have since the end of the Cold War well referred to “historical rights” when claiming that states such as Yugoslavia and Syria were established on “artificial grounds” or with artificial boundaries; have established “zones of influence” when the European Union introduced membership accession procedures, deeply intervening into Eastern European countries’ domestic affairs; and have “weaponized soft power” when “development assistance” or recently Covid-19 vaccines were delivered based on political and economic conditionality.

But today, the European Union detects a return to power politics when other actors refer to historical rights, establish zones of influence and weaponize soft power. Their politics is thus presented as “promoting a strict sovereignist approach”. The main actors of reference here are Russia, China and Turkey. But implicitly, the Strategic Compass also has tendencies such as the “Global Britain” after BREXIT, the Trump administration with its emphasis on nationalism instead of multilateralism or the rising nationalist tendencies of politicians such as Le Pen in mind.

The end of globalization

The liberal theory of international relations and its mıst recent child, the theory of globalization had claimed that economic interdependence between countries would lead to global peace. That was one of the basic arguments to open up national borders both in terms of economic policy concerning capital flows as well as in regards to supranational integration and promoted migration.

This is not just a theory-related acknowledgment. It includes that consciously created economic dependencies do not serve the desired political outcomes on the adversaries any more, as the failure of sanctions regimes in Cuba, Iran, Venezuela and recently Russia well display.

This statement also refers to the growing global economic crisis, where a lack of growth leads to increasing null-sum-equations: The conflicts arise from the interdependence itself.

The European Union concludes the existence of a “contested multipolar world” (SC, 8), another confirmation of the end of unipolar hegemony. The EU is “surrounded by instability and a war on its borders” (SC,8). “Armed aggression, illegal annexation, fragile states, revisionist powers and authoritarian regimes” surround the EU, states the compass (SC, 8) as well as terrorism violent extremism, hybrid conflicts, irregular migration are some of the challenges.

The European Union clearly prepares for great power competition and will not at all take a step back from “defending our interests and values”. “Our security is at stake, at home or overseas. We need to redouble our efforts to implement an integrated approach to security, conflicts and crises”, says the compass (SC, 12)

The EU’s primary adversaries are Russia, China and Turkey.

For the High Representative of the EU, Josep Borell the Ukraine crisis has provided that “History is accelerating once again”. What has accelerated in his words is the EU’s actions, which have “broken several taboos along the way” by imposing sanctions, financing delivery of military equipment to a country under attack “for the first time ever”, and building an international coalition.

Russia’s military operation in Ukraine is considered as “undermining European and global security” and the rules-based international order. In other words, a direct challenge to what is left from the Western-centered international system.

But the conflict with Russia is not limited to Ukraine. Russia’s activities in Libya, Syria, Central African Republic and Mali are also evaluated by the Strategic Compass as “a long-term direct threat for European security”, which will be responded to “resolutely” (SC, 7).

The prize of the 21st century: China

For the Strategic Compass, the People’s Republic of China is the main prize. It “tends to limit access to its markets and seeks to promote globally its own standards”, criticizes the compass (SC, 8) and demands a greater share of Chinese wealth.

China’s integration into the world “will mark the rest of this century”, says the European Union, and announces in an unprecedented way its imperialistic demand that this shall happen in a way that does “not contradict our interests”.

China’s military development and involvement in “regional tensions” is noted as “impacting regional and global security”.

The third adversary is Turkey, which is made responsible for tensions in the Eastern Mediterranean due to “provocations and unilateral actions against EU member states” (SC, 9).

Turkey is called to “advance on a path of cooperation, sustained de-escalation and to address EU concerns”, but the country is not named as a partner in the summaries of the compass (SC, 42).

The Strategic Compass detects “a new strategic landscape”, and in spite of some statements concerning China and the Indo-Pacific, it is mainly focused on Europe’s wider neighborhood. This turns the European Union into more a regional than global power.

The Western Balkans in terms of security and stability, the eastern neighborhood from Moldavia over Ukraine to Georgia, the southern neighborhood with a focus on Syria, Libya and the Sahel as well as the Eastern Mediterranean are the regions which the Strategic Compass focuses on. This is reflected in both the textual attention given to them as well as the military means which are announced by the decision and which will be discussed in the next article.

With Russia, Turkey and China as adversaries, and the European neighborhood as regional focusi the European Union reinforces the Transatlantic Alliance with the United States and NATO as main pillar in its strategic outlook. This can even be interpreted as getting behind the US as far as the race for China and the Indo-Pacific is concerned.

The partnership with NATO is called “essential for our Euro-Atlantic security” (SC, 39), and the “strategic autonomy”, which the compass shall “enhance”, is “complementary to NATO”, with both going “hand in hand” (SC, 13). Though, as will be shown in the next part, some frictions appear in military planning.

The partnership with the United States is considered “of strategic importance” and shall be deepened, declares the Strategic Compass (SC, 42). This is followed by an emphasis on cooperation with Norway and Canada (SC, 46), while the EU declares “to remain open to engage with the United Kingdom” (SC, 46).

In Africa, cooperation shall be advances with the African Union, the ECOWAS and the Sahel G5, while no specific country is mentioned in terms of bilateral engagement.

Europe’s limitation of regional scope is best reflected in Latin America: No Latin American multinational organization is mentioned at all as cooperation partner, and as bilateral partners, only Colombia and Chile get a mentioning from a whole continent (SC, 43).

In summary, the European Union acknowledges the rise of a multipolar world and focuses on its immediate neighborhood as far as security and defense is concerned, while announcing to reinforce the transatlantic alliance globally.

In the next article, we will explore the military and security vision of the European Union as expressed and decided upon in the Strategic Compass.