The goal of the Turkish Armed Forces in North Iraq: the comprehensive liquidation of the PKK! 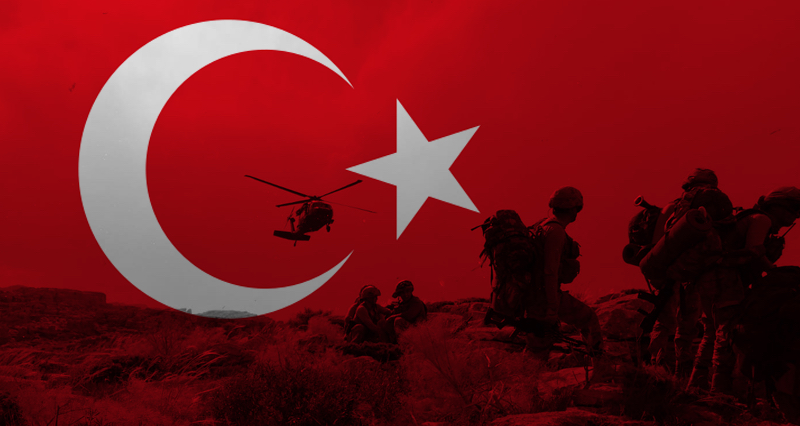 On the night of April 17, Turkey launched the Claw-Lock operation against the US-backed PKK forces in northern Iraq. With this step, a new phase has been started in the “Claw” series of operations.

The Turkish Armed Forces are famous for giving meaningful names to their military operations.

With these operations, the permanent bases of the Turkish Armed Forces largely blocked terrorists’ passageways to Turkey. The military operations were then extended south to block the crossings between Makhmur, Sinjar, and Qandil, the PKK’s three key centers in Iraq.

The Turkish Armed Forces began to gain regional dominance with permanent bases in northern Iraq. The purpose of these operations was to prevent the PKK from redeploying to the camps it used, including Gara, where its main operational headquarters is located. This goal has been achieved to a certain extent. The area around the PKK’s military headquarters on Mount Kandil is being cleaned. The next move is to force the PKK’s headquarters in Kandil to raise the white flag.

Panic in the PKK leadership

It is noteworthy that, simultaneously with the Claw-Lock operation, the Iraqi Army launched an operation against the PKK camps in Sinjar, which is described as the “Second Kandil”. Additionally, the Turkish Armed Forces carried out effective point operations against the PKK structure in northern Syria.

The PKK issued a statement in response to the operation. Here, the Kurdistan Democracy Party of Iraq (KDP) is evaluated as an enemy because of its support for Turkey’s operation, and the Iraqi administration is accused of being “the hostage of the KDP and the Turkish state”.

However, the main emphasis in the PKK statement is the assessment that Turkey aims to “eliminate all the gains of PKK in northern Iraq in the medium and long term”.

The second important point in the statement is the allegation that Turkey has held PKK-centered negotiations with Europe and the USA recently.

The end of the terror corridor

Operations continued until July 15, 2016, despite the efforts of FETO ​(Gulenist Terror Organization) ​elements within the TAF to undermine them from within. After the FETO coup attempt was suppressed and the Gladio elements within the security institutions were cleared, a serious change took place in the nature of the operations. Freed from the shackles, Turkey launched the Euphrates Shield Operation 40 days after the coup attempt to disrupt the corridor of a “Second Israel” labeled “Kurdistan”, the strategic goal of the USA within the Greater Middle East Project. This action continued with Operation Olive Branch in 2018 and Operation Peace Spring, launched in 2019 as operations continued in northern Iraq. Turkish Armed Forces cleared the region that was under the control of PYG and IS. And finally “plan of a terror corridor” reaching from the north of Iraq to the north of Syria and the Mediterranean Sea was foiled.

Turkey has had success in its armed struggle against these organizations that are subcontractors of the US army in Iraq and Syria. In fact, Turkey is resolutely continuing an armed war against US imperialism.

One small step can change everything

The operations, carried out by the Turkish Army with the principle of “destroying terrorism at its source”, within and outside the borders of Turkey, are progressing successfully. International conditions have also emerged that will eliminate the US support behind the PKK structure in northern Syria. Turkey’s normalization of relations, especially with the Syrian government, should be the first step toward this.

The normalization between Turkey and Syria will ensure that many of the plans, implemented by the USA by provoking the conflicts between the countries of the region, will be in vain. We are in a period where the unity of will among the countries of the region is decisive. Let’s remember that the independence referendum of the “Kurdistan Regional Government”, which was provoked and supported by the USA and Israel in 2017, was defeated by the joint efforts and will of Turkey, Iraq, and Iran.

Along with the normalization of Syrian-Turkish relations, the support of Russia, Iran, and China will also provide for the development of peace and tranquility in Western Asia. Only on that way will Turkey create the necessary pressure on the US to withdraw its support from the PKK. A force can be created to pull it from behind. With an agreement with Syria, the refugee problem, which is used by the USA to provoke chaos in Turkey, will also be resolved.