Turkish military operation in Northern Iraq; Turkish-Russian cooperation in Ukraine; Nationwide debates over the fate of the refugees in Turkey 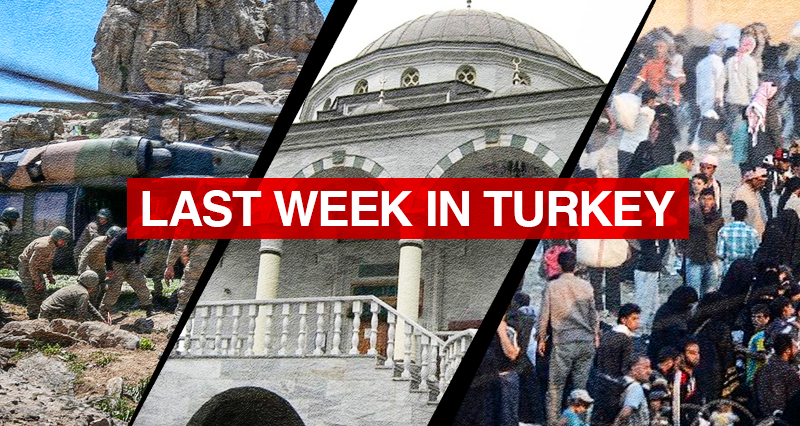 There has been three main topics on the public agenda in Turkey last week: first was the military operation initiated by the Turkish Armed Forces against the PKK terrorist organization in Northern Iraq, second was the rescuing of the hostages held at the Mariupol Mosque by the Russian special forces following a call from Erdogan and the third was the ongoing nationwide debates over the future of Syrian and Afghan refugees in Turkey.

On April 18th, National Defense Minister Hulusi Akar announced that the Turkish Armed Forces had launched the “Operation Claw-Lock” against the terrorist hideouts in the Metina, Zap and Avashin-Basyan regions in Northern Iraq.

Defense Minister Akar gave a statement about the operation: “As of this night, our heroic Turkish Armed Forces have launched the Operation Claw-Lock in order to eliminate the terrorist strikes against our civilians and our security forces from northern Iraq, and to ensure the security of our borders.”

Akar shared the following details about the operation: “In the operation carried out according to the strategic plans, the terrorist hideouts in Metina, Zap and Avashin-Basyan regions were hit by our air forces. Our brave pilots have successfully hit the targets belonging to the terrorist group that are consisting of underground bunkers, caves, tunnels, ammunition depots and a so-called ‘headquarters’. The targets were also hit with a full accuracy, which were designated by our self-propelled artillery elements such as Firtina and CNRA self-propelled artillery guns. Our brave commando teams and Special Forces, supported by ATAK helicopters, UAVs and UCAVs, have infiltrated the area on the ground with an air support cover. So far, our operation has been successfully carried out as planned. The targets set in the first phase have been successfully captured.”

Akar stated that the operation took place “in full respect for the sovereignty and territorial integrity of our friend and ally Iraq”, adding that the targets hit by the Turkish Army were all hostile terrorists, and that “maximum sensitivity was shown to prevent any civilian casualty”.

According to Turkish media reports, the operation began with laser-guided bombs hitting areas that contain the terrorist hideouts. These areas have also come under artillery fire from the ground. In the next phase, Turkish commando teams struck these areas from 6-7 different locations.

According to the latest information, the operation was a success, while the PKK terrorist elements were delivered a heavy blow.

The Turkish-Russian cooperation in Ukraine

Just as the rest of the world, the war in Ukraine is still remaining as the primary topic on the public agenda in Turkey.

And the statement from the Russian Defense Ministry last week has received a lot of attention, since it directly concerned Turkey.

Chief spokesperson for the Ministry of Defense of the Russian Federation, Igor Konashenkov announced in a statement that Russian troops had conducted a special operation “to rescue the hostages held by the Ukrainian forces at a Turkish mosque in the Primorskiy district of the city of Mariupol” on a personal request of President Erdogan.

Konashenkov announced that 29 fighters, including foreign mercenaries, were eliminated during the Russian Special Forces’ operation and that all hostages, including a citizen of one of the Commonwealth of Independent States member country, had been rescued.

Konashenkov’s statements have found wide coverage among the Turkish press.

Turkey has been taking a neutral position since the start of the Ukrainian War, and has been refusing to join in anti-Russian sanctions, despite pressures from the United States and NATO.

The debate over the refugee status continues in Turkey

The debate over the fate of the Syrian refugees in Turkey, numbering between 5 and 6 million, is still ongoing.

The issue of Syrian refugees, which the Victory (Zafer) Party Leader Umit Ozdag has frequently raised before the presidential elections scheduled for 2023, was on Turkey’s agenda last week.

The first statement from the officials on this issue came from the Interior Minister Suleyman Soylu. Soylu said in a statement that Turkey holds a right not to take accept the refugees returning to Syria for holidays and then come back Turkey after the holiday ends.

Soylu said: “So far, 500 thousand refugees have returned on their own demand. And today, this issue is being provoked. Provocation is the right term here. Turkey is fighting against illegal immigration. More than 1 million illegal immigrants have been put in custody by Turkey.”

While President Recep Tayyip Erdogan confirmed the statements given by the Interior Minister Soylu, he added: What Mr. Soylu said is true. We are a power that accepts the asylum seekers, and not rejects them. And after the construction of the housing complexes in Northern Syria is finished, these refugees will seek return voluntarily, after a peaceful and safe environment is provided in that area.”

The leader of the government-allied party MHP, Devlet Bahceli said: “Illegal immigration is a undefined way of invasion, it must be prevented and those caught doing it should be deported. We have to think about our demographic future, and the problem should be analyzed in in a calm manner (…) The tolerable time of their stay has already passed. Every person has the right to live in his own homeland, in safety and peace. The Syrian refugees who can go home in the upcoming Ramadan holiday, do not need to return back here.”

Bahceli also explained that the issue of asylum seekers should not be used for provocation in domestic policy.

The leader of the Vatan Party Dogu Perincek on the other hand, said that these persistent provocations of the refugee issue are supported and plotted by a US-backed group. Perincek stated: “The solution for the refugee problem is in the program of the Vatan Party. We will solve this problem in only 15 days. We will make a deal with the Syrian government. The PKK will quit its operations and we will wipe out all other terrorist elements in the region. Then we bring the good news to our guests that they can return to their homeland. The Syrian government has also passed numerous amnesty laws for the Syrian opposition. Some of them will surely stay, and they will be our brothers and our citizens (…) Vatan Party has a program, in which the people of Syria can return to their homeland, by making a deal with the Syrian government. And the realistic solution is eliminating terrorism with that plan.”