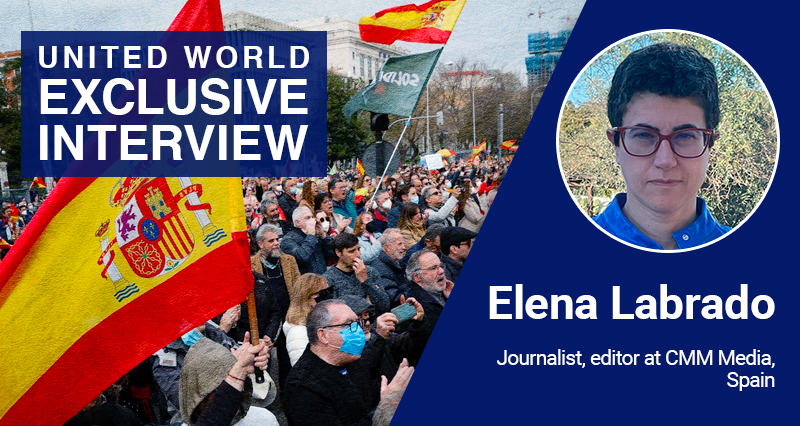 Under US pressure, there is a huge debate in Europe on tightening the sanctions regime on Russia. Those who defend a stronger stance also paint a picture of a united political class. Is that true? We have interviewed Elena Labrado, journalist and editor at Spain’s Castilla-La Mancha Media on her country’s positioning in the crisis and its effects on Spain.

Europe seems to be united in its position on the Ukraine conflict to pressure Russia and exclude this country from the international system more and more. Can you confirm this unity for Spanish politics as well, or are you observing that political circles have another opinion that it is presented as a mainstream?

In Spanish politics, there is no unanimity regarding the sanctions and the harsh line of action towards Russia after the invasion of Ukraine. The two parties with majority representation in Parliament, the center- left PSOE, now in the Government, and the center- right PP, which now leads the opposition parliamentary, both do agree on favoring the decisions taken in this regard by the Commission and the European Union.

Others parties, such as the far right Vox, support the measures, although without taking a too exaggerated position. Others political forces, like Ciudadanos, of a more liberal shape, have also displayed approval to the official Spanish position taken within the framework of Europe and NATO.

Opposition from NATO policies comes mainly from the Left

However, within the Spanish political spectrum, it is more on the Left where we encounter opposition to the politics pursued against Russia. For example, Podemos, a partner of the PSOE in the Government, initially maintained a position belligerent against the shipment of weapons military to Ukraine. Over time, the party has spoken less on the matter, but its deputies – and some of its ministers in the Executive – maintain their rejection of these kind of measures

Others parties of the left minority, such as EH Bildu (Basque) or the CUP (Catalan) have also expressed critics and have voted against some proposals in this regard. The representatives of these parties, Podemos, EH Bildu and Izquierda United, have also not supported arms shipments to Ukraine in debates in the European Parliament – nor the increase of sanctions against Russia. They also rejected giving Ukraine the status of a EU candidate at the beginning of March.

What consequences of the crisis do you observe in Spain in economic and social terms in the macro economy and in daily life?

In Spain, the consequences of the war in Ukraine were felt very soon all across the country. First of all, increasing energy prices have skyrocketed the energy bill and caused havoc in small and medium companies. This affected whole sectors in millions of homes, leading to problems in paying the bills. And although the prices were already rising in the previous months, the conflict has intensified the hike, with numerous businesses raising product prices to include the elevated costs of energy and raw materials. Because raw materials have also been becoming more expensive and, with that, the basic consumption of thousands and thousands of families has become more expensive too.

Concerning issue of lack of wheat that we used to import from Ukraine and Russia, (and for the latter, add the matter of fertilizers): this has also caused increase of prices and has caused problems to bakers, farmers and ranchers. They now have difficulties to bake bread, take care their fields or feed their animals.

Furthermore, the elevated fuel prices have caused a protest in the transport and cargo sector, which has generated supply problems for some days. Luckily, these problems were limited. This all has caused a great pressure on the government, which has had to negotiate with Brussels on the system of European energy and subsidies for fuel, besides of other measures.

How is the social reaction in Spain to the conflict in Ukraine and the position of the European Union?

The position in Spain regarding the conflict in Ukraine largely coincides with the position official of the Government of Pedro Sánchez, with the exception of the supporters of the aforementioned political parties politicians. These are in minority, but they do exist. There are also others sectors, as well minorities, who would supporters of an even tougher line against Russia.

The Spanish society has reacted pretty much in solidarity and understanding with the hardships what the Ukrainian citizens go through due to the war and has welcomed the arriving refugees. They have even organized convoys to bring from there numerous minors (with their mothers) who had already ties to our country. This has happened above all within the framework of temporary foster care and long developed social programs.